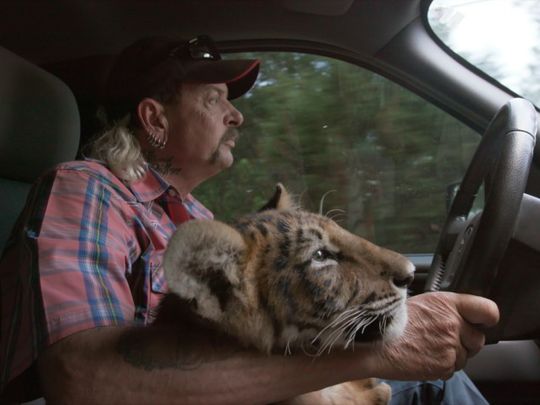 Joe Maldonado-Passage, better known as Joe Exotic from Netflix’s hit ‘Tiger King’, is in quarantine after being transferred to a different prison, according to his husband.

Maldonado-Passage, 57, who became an overnight sensation when the docuseries about big cat zoos debuted two weeks ago, is serving a 22-year sentence after a jury found him guilty of a murder-for-hire plot against his nemesis, Big Cat Rescue owner Carole Baskin. (He says he was framed.) He was also charged with multiple wildlife violations, including the killing of five tigers.

Prison records show that Maldonado-Passage has been transferred to FMC Fort Worth in Texas, a medical centre in the Federal Bureau of Prisons system. Previously, he was being held at the Grady County jail in Chickasha, Oklahoma, not far from where he ran his roadside tiger zoo, the Greater Wynnewood Exotic Animal Park.

In an interview on Andy Cohen’s Sirius XM radio show, Maldonado-Passage’s husband, Dillon Passage, said he was told “they are putting him on a COVID-19 isolation because of the previous jail he was at, there were cases.” He said he normally speaks to his husband three to five times a day, but hasn’t spoken to him since he was moved last week.

“Wow, so Joe Exotic is in his own COVID-19 quarantine right now?” Cohen asked.

“From what I know, yes,” Passage said. “That’s just what people have told me.”

However, a staffer at the Grady County jail said that while it’s correct that Maldonado-Passage was transferred, they do not have confirmed cases of covid-19: “We do not have, at this time, any positive cases of coronavirus at this facility.”