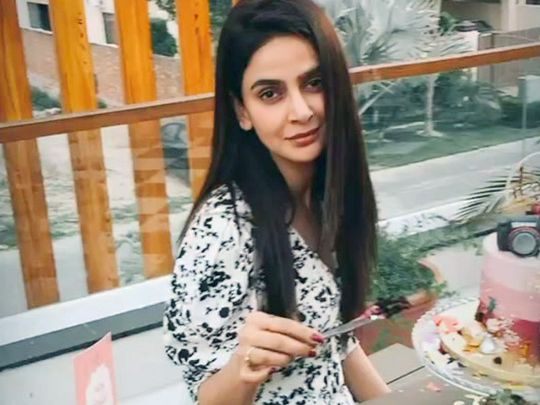 On Sunday, April 5, actress Saba Qamar celebrated her 36th birthday in quarantine. It turned out to be quite an affair, as the ‘Hindi Medium’ star, dressed in smart casuals, cut as many as three cakes, and engaged with her fans on social media.

The festivities began at midnight, when Qamar went live on Instagram. She interacted with her fans on a video call, much to their delight. The cake-cutting was performed on the balcony of her new bungalow which overlooks a posh neighbourhood.

Some of her neighbours also came out of their houses and greeted her from the distance. The cakes were no less a sight — from homemade chocolate fudge cake topped with strawberries, to a three-tier cake which had an iced Nikon camera designed on top of it and a movie clapper at the bottom; it said, “Queen.”

Qamar was joined by her sister, her nephew and nieces, and her manager, Mishal Cheema. Post cake-cutting, she had another live session on Instagram, which brought the eventful day to a happy close.

On the professional front, Qamar had returned from Istanbul, Turkey, where she shot for an international ad campaign, before she isolated herself at her home in Lahore. She was supposed to take part in the last shooting spell of her web series, Mann Jogi, but the situation with the coronavirus pandemic got worse all over and Pakistan also locked down its cities.

The only Pakistani to have been nominated in the Best Actress (Popular) category by India’s leading award show, Filmfare, Qamar has had an enviable career trajectory so far — last year, she wowed even her worst critics with a finely nuanced performance as the wronged woman who rises to settle scores, in the thriller Cheekh. This year, she is due in critically acclaimed director Sarmad Khoosat’s feature, Kamli (Crazy), where she plays the eponymous character. It’s said to be one screen role to die for.