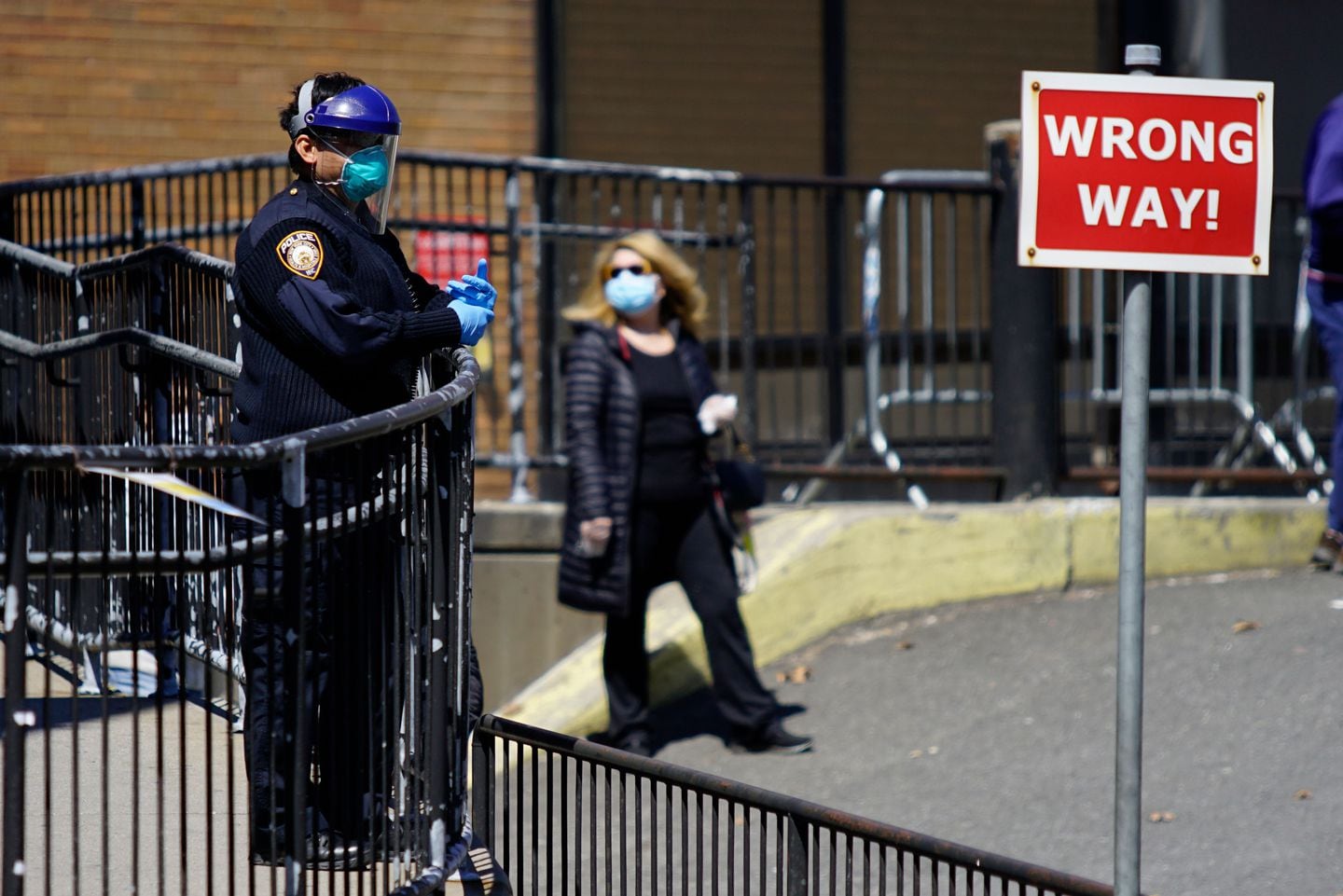 “While none of this is good news, the possible flattening of the curve is better than the increases we have seen,” Cuomo said during a news conference. Two days of data is not nearly enough to identify a trend, but officials said there were other glimmers of hope, including significant declines in the past two days in the number of new people hospitalized, admitted to intensive care units and intubated.

New York remains the most severe area for the coronavirus outbreak in the United States, with more than 130,000 residents testing positive for the virus, far more than any other state. Officials cautioned that it is impossible to know whether New York has indeed reached the apex or whether the recent numbers are only a lull before worse ones.

“If we are plateauing, we are plateauing at a very high level, and there’s tremendous stress on the health-care system,” Cuomo said. “This is a hospital system where we have our foot to the floor and the engine is at redline, and you can’t go any faster.”

In the NYU Langone hospital system, which includes six inpatient facilities in the metropolitan area, the number of new patients has “appeared to level off over the past few days,” spokeswoman Lisa Greiner said. The facilities have enough ventilators for the current caseload — “every single patient that required a vent received one,” she said.

Northwell Health has 19 hospitals in the region and has treated 3,300 confirmed coronavirus patients. About 1 in 4 of those patients ended up in intensive care, and 20 percent have needed a ventilator to breathe. Northwell is using about 80 percent of its ventilator capacity. “We feel we have what we need, but being at 80 percent, that could slide quickly,” spokesman Terry Lynam said.

Later Monday, in a move expected to help ease the strain on the city’s health-care facilities, Cuomo said that President Trump had agreed to use the 1,000-bed hospital ship USNS Comfort, which is docked on New York’s West Side, to treat patients with covid-19, the disease the novel coronavirus causes. That’s on top of 4,000 temporary beds being constructed at the nearby Javits Center convention hall — giving New York significant extra capacity to handle the sick.

Initially, it was envisioned that both facilities would treat only non-coronavirus patients, but those plans quickly evolved amid complaints from hospital leaders frustrated that both the Comfort and the Javits Center were nearly empty while the city’s doctors and nurses were being pushed to the breaking point.

The governor warned that, even if this week marks the peak of the crisis, the rules barring nonessential commerce and prohibiting gatherings will have to stay in effect until at least the end of April.

“We have been behind on this virus from day one, and this virus has kicked our rear end,” Cuomo said. “We underestimate this virus at our peril, and we learned that lesson — this is not the time to slack off what we’re doing.”

As of Monday, the coronavirus had killed 4,758 people in New York state, most of them in the city. More ICUs are being built at emergency hospital sites in and around the city. And while the governor sounded a hopeful note that the extra resources will be enough to give care to all who need it, others emphasized that it’s still too soon to know whether New York has turned the corner.

“It’s too soon to celebrate,” said Stephen S. Morse, an epidemiologist at Columbia University’s Mailman School of Public Health. “We’ll know later this week if the trend continues, and we should start to see a sustained decrease in the numbers.”

On Long Island, Suffolk County Executive Steve Bellone (D) said officials there had seen one of the smallest increases in critically ill patients “in a long time now.”

“If in fact we are reaching that plateau, it means that social distancing is working,” he said. “But that does not mean we take our foot off the pedal now.” He said the worst thing that could happen now would be if “we see some positive news and say, ‘Okay, now we can start adjusting our life and getting back to normal.’ ”

“While we are not anywhere close to being out of the woods yet, we are clearly on the right path to get there,” he said. The social distancing effort to slow the spread of the coronavirus “is starting to pay off, even with the lag time in getting test results back.”

New Jersey has 41,090 confirmed cases, but the daily increase, which was about 24 percent a week ago, was down to 12 percent on Monday. The state’s death toll stands at 1,003, including Jersey City Councilman Michael Yun, who died over the weekend after contracting the virus, the governor announced.

While officials hoped this week might be the worst New York has to face, they were preparing for even greater losses and the possibility of having to create temporary graves if the current pace overwhelms funeral homes and mortuary services in the city.

New York Mayor Bill de Blasio (D) was reluctant Monday to go into much detail about the city’s plan, saying only that officials were prepared to deal with the prospect of burying covid-19 victims where they could be tracked and later exhumed for burial elsewhere once the crisis has passed.

“We may well be dealing with temporary burials,” de Blasio said at a news conference. Historically, the city has used Hart Island as a potter’s field site for burials of those whose families or estates were unable to pay for their interment, but the mayor was tight-lipped about whether that location would be used for those who died of covid-19.

“There will be delays because of the sheer intensity of this crisis,” the mayor said. “We’re going to try to treat every family with dignity. . . . The focus right now is to try to get through this crisis.”

Mark D. Levine, chairman of the New York City Council’s health committee, tweeted Monday that victims might be buried in city parks, but other officials sounded a note of caution.

“We’re not interring anyone in city parks at this time,” said Aja Worthy-Davis, a spokeswoman for the chief medical examiner’s office in New York. The city’s surge plan for influenza pandemics includes a section on temporary burial in parks as a “potential option. But it is not being put into play right now,” she said.

Although the hospital morgues are dealing with high body counts, morgues in the city’s five boroughs, plus the morgues in tents outside Manhattan’s Bellevue Hospital and others, have not reached their limits, officials said.

The city also has dispatched about 80 refrigerated trucks to hospitals, each capable of holding 45 to 100 bodies.

Craig and Barrett reported from Washington.