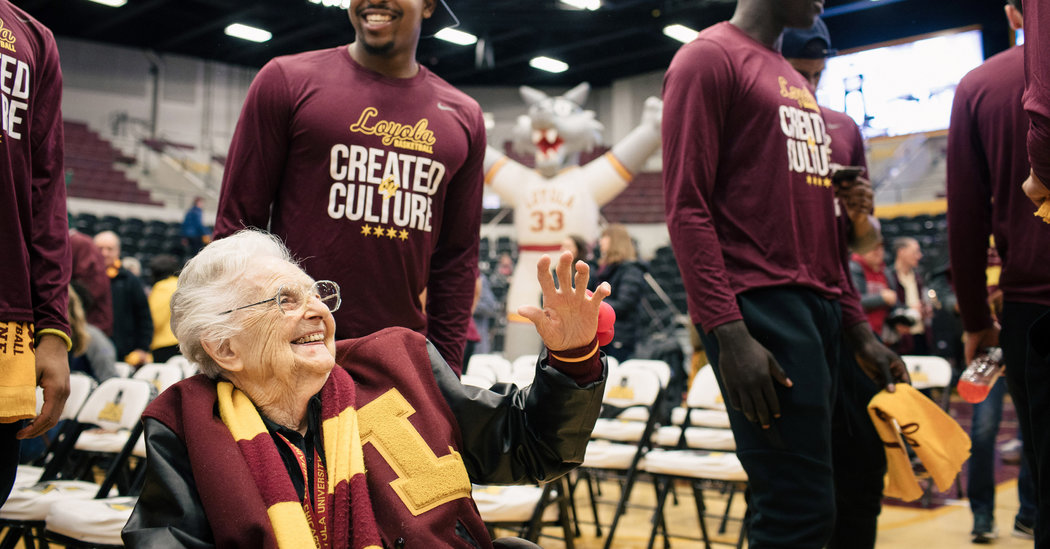 CHICAGO — The emails from Sister Jean Dolores Schmidt arrived as they always do after a game, one for each member of the Loyola-Chicago men’s basketball team. The Ramblers’ hopes for an N.C.A.A. tournament berth had been dashed by a 1-point loss to Valparaiso in overtime in the quarterfinals of last month’s Missouri Valley Conference tournament.

Now Sister Jean, the team’s 100-year-old chaplain, had to help the players say goodbye to their season.

She wrote that she knew that they had given their best effort, and she also gave them an assignment.

Two years ago, during the N.C.A.A. tournament, Sister Jean became an international celebrity as Loyola made an exhilarating run to the Final Four. This year, she found a very different role as her team’s season ended without the possibility of a title.

She asked the Loyola players to reflect on their childhood dreams, and to consider where their lives stood in relation to them.

Less than a week after the Ramblers’ defeat, the coronavirus pandemic forced the N.C.A.A. to cancel its men’s and women’s basketball tournaments and the spring seasons of other sports. As the season ended without the possibility of a national championship for anyone, college athletes across the country faced questions very much like the ones Sister Jean had posed to the Ramblers.

Where were their dreams now, as moments that they could have carried through their lives were snatched away in a heartbeat?

She added: “This is a loss. It’s a big loss, and these kids that were supposed to be in the tournament, it’s not going to come back to them.”

For weeks, Americans have grappled with life without sports, including the N.C.A.A men’s tournament, which would have culminated Monday with the championship game in Atlanta.

Since the March 12 announcement that the tournament would not take place, coaches like Duke’s Mike Krzyzewski have been forced to adjust how they run their programs. Staff meetings now take place over Zoom, while interactions with players have shifted to FaceTime calls.

The Sunday after the tournament was canceled, Krzyzewski held a final team meeting that included a version of “One Shining Moment,” the highlight montage regularly shown on TV after the men’s championship game. The Duke video was created by its athletic department as a substitute for a proper finale. Krzyzewski has found in the weeks since the cancellation that many athletes’ biggest concern is a lack of closure.

“The reality really does not set in right away for them,” Krzyzewski, who has won five national championships at Duke, said in a recent telephone interview.

He added: “It’s important for these youngsters, all of them — men and women, the basketball players — to have closure, and that closure does not end with showing them ‘One Shining Moment.’”

Sister Jean often thinks back to 2018 and the string of dramatic victories that landed Loyola in a national semifinal against Michigan. Now she also considers how she and her beloved Ramblers would have felt if a global health crisis had erased the opportunity.

Her personal collection of memorabilia from that tournament, including her Final Four ring, has become a part of a gallery at the Loyola University Museum of Art that is dedicated to her life’s work.

For Sister Jean, a fan who has memories of watching the national tournament with fellow nuns in the 1940s, the cancellation meant an aching heart on behalf of the players and coaches who were set to experience the event, possibly for the first time. “Things had to be stopped,” she acknowledged, adding: “It was like the bottom of the bucket dropped out. It was like someone threw a bomb on us — there was not going to be anything.”

The reality also abruptly hit home for Krzyzewski, who says there has been a noticeable void in American life since sports were put on hold to help slow the virus’s spread.

“Not having sport — just not college basketball — but sport, you forget how inspirational it is for our country, and a diversion, too,” he said. “It’s inspiring, but it’s a diversion to things that happen to you in your life, your job.

“You miss it. Inspiration across our country is needed,” Krzyzewski added. “I think what will come out of this is a greater appreciation for not just someone who hits a home run or dunks but for the normal great people in our country.”

As the health crisis changes the way Americans live, Sister Jean, like many, is working from home. Her apartment sits almost eight miles from Loyola’s campus, where she still has an office in the university’s student center. Rather than maintaining the open-door policy that lets students seek her out, Sister Jean is now limited to communicating through emails, phone calls and video conferencing. Because the pandemic forced the campus to close, the end-of-season meetings Sister Jean scheduled with players became phone calls.

The list of childhood dreams shared during those conversations ran the gamut. Some players looked forward to a life spent as a zookeeper or a medieval knight. Others imagined playing Division I basketball and reaching the N.B.A., while others envisioned themselves, like Sister Jean, committing to a life serving God.

Whether their dreams were realized or had changed, Sister Jean asked players to explore how their dreams had shaped them, leading up to such a life-altering period of time. After living through the Great Depression, the upheaval of World War II and the devastating terrorist attacks of Sept. 11, 2001, Sister Jean now contemplates how the country will emerge from this crisis — which she says is unlike any she has experienced before.

Sister Jean believes that over time, people will become kinder, more thoughtful and cautious. In a recent video, she encouraged people to stick together and to continue to work together.

“Unless we do what we’re all supposed to do, we’re not going to survive,” she said, adding, “We’re going to win something out of this — we’ve already lost a lot, and people have suffered a lot, but I believe something good is going to come out of all of this.”

In the meantime, Sister Jean will continue to begin her workday at 7:30 a.m., when she tries to answer the emails she receives — sometimes 25 or 30 at a time. In her prayers, she says, she asks that the pandemic end.

Sister Jean watches previous N.C.A.A. title games when she can find them, including Loyola’s 60-58 overtime victory over the two-time defending champion Cincinnati in 1963, and looks forward to the return of college basketball. But she also tries to find good in this season of life she admittedly sometimes struggles to understand. To do so, she says, requires some intentional thought.

“When we go to bed, I think it’s good to think about all the good things that happened during the day,” Sister Jean said. “That way, we will go to sleep with less worry, and we will wake up joyful.”