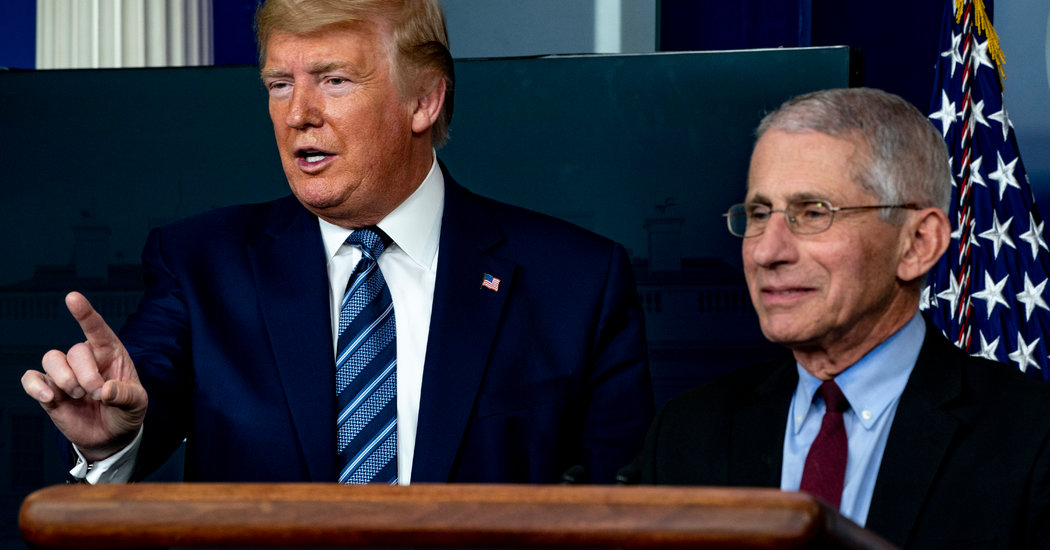 Mr. Trump is typically joined at his briefings by top medical advisers, including Dr. Fauci and Dr. Deborah L. Birx, his coronavirus coordinator. But the president does most of the talking, and has told several advisers that the briefings give him free airtime and good ratings.

A day earlier, Dr. Fauci had privately challenged rising optimism about the drug’s efficacy during a meeting of the coronavirus task force in the White House’s Situation Room, according to two people familiar with the events who spoke on the condition of anonymity to describe a conversation in a sensitive setting. The argument was first reported by the website Axios.

The meeting’s agenda included the question of how the administration would discuss chloroquines. Dr. Stephen Hahn, the Food and Drug Administration commissioner, gave an update on chloroquines, and what various tests and anecdotal evidence had shown. Peter Navarro, the president’s trade adviser who is overseeing supply chain issues related to the coronavirus, asked to join the meeting, said the people briefed on what took place.

Mr. Navarro, who has been pushing to secure chloroquines at the president’s request to provide to caregivers, walked in with a sheaf of folders he had placed on a chair next to him, plopped them on the table and said he had seen studies from various countries, as well as information culled from officials at the Centers for Disease Control and Prevention, showing the “clear” efficacy of the drug in treating the coronavirus. Mr. Navarro also argued that the medicine was being used by doctors and nurses on the front lines of the coronavirus fight.

Dr. Fauci pushed back, echoing remarks he has made in interviews in the past week that rigorous study is still necessary. Mr. Navarro, an economist by training, shot back that the information he had collected was “science,” according to the people familiar with the episode.

Vice President Mike Pence tried to tamp down the debate, and as emotions calmed, Mr. Trump’s son-in-law and senior adviser, Jared Kushner, advised Mr. Navarro to “take yes for an answer.” The president went to the briefing room lectern a short while later and glowed about chloroquine use, suggesting he might even take it himself despite not having symptoms or evidence of the virus.