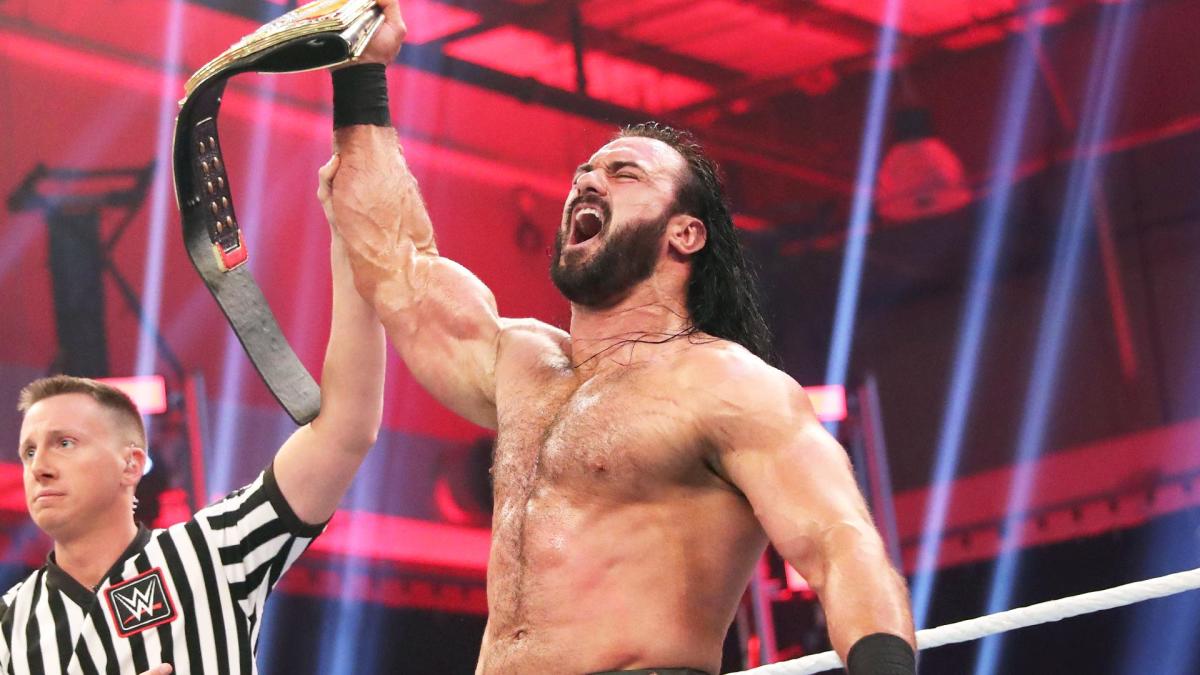 Their introduction took place five years ago on a Raw in April 2013. Lesnar came to the ring and destroyed McIntyre, Jinder Mahal, and Heath Slater, the members of the 3MB comedy group. Away from the carnage, Lesnar asked to speak with McIntyre.

“I remember it well,” said McIntyre. “Brock was not long back at that point from UFC. He pulled me aside, and he straight-up asked me, ‘Why are you involved in this?’ He was so confused, but he saw something in me and believed in me. It’s pretty crazy, all these years later, I was the guy to take the title from him at WrestleMania.”

McIntyre is the new WWE champion, words he has been waiting to hear since he first arrived in 2007. He won the title in a high-octane match in the main event of WrestleMania’s second night, finishing off Lesnar following his fourth Claymore Kick. The show went off the air with McIntyre raising the title, while Lesnar enhanced the moment by lying motionless on his back in the center of the ring.

“Brock is a man’s man,” said McIntyre. “He won’t do business with you if he thinks you’re not doing the job you should be doing. Brock is a very private person, he doesn’t like people too much, but he’s all about respect. To have earned his respect means a lot.”

Since WrestleMania was taped ahead of time, McIntyre watched the match from the comfort of home next to his wife and two cats, Chaz and Hunter.

“My wife chose the name Hunter because his breed is known for hunting and intelligence,” added McIntyre. “But now, whenever I hear someone say ‘Hunter needs to see you,’ I immediately think of my cat before realizing I need to see my boss [WWE Executive Triple H].

“Watching at home was a surreal experience. I was having an out-of-body experience watching on the couch.”

McIntyre is well-aware of the enormity of WrestleMania, as wrestling fans usually travel from across the globe to be part of the week’s festivities before watching WWE’s signature show on Sunday night. Despite the coronavirus pandemic ruining those plans, and the match taking place in the Performance Center instead of the massive Raymond James Stadium, McIntyre was immensely proud to share his WrestleMania moment with the world.

A WrestleMania highlight that did not air was the post-match embrace between McIntyre and Vince McMahon.

“He was happy for me,” said McIntyre. “He knows the journey I’ve been through and how hard I’ve worked, and nobody works harder than Vince McMahon, so his respect means the world to me. Triple H was there too, and he’s the reason I’m back in WWE. Both of them believed in me, and it was very special to hear them say they’re proud of how far I’ve come as a performer and a man.”

McIntyre is now the face of WWE, a position he wanted but never attained when he was first hired in 2007. It appeared to be an impossibility after he was released from the company in June 2014, but he finally seized hold of that spot at WrestleMania.

“This is what I’ve always been preparing for,” said McIntyre. “Before I wasn’t ready, but my journey prepared me to be the top guy. The boss has got a saying that, ‘Sometimes you’ve got to eat crap and learn to like the taste.’ I’ve eaten banquets of crap, and I’ve learned from it and I fought through it. I can lead the company in any situation, especially the difficult one we are in right now.”

The McIntyre era begins Monday night on Raw. The next six-to-eight months of television will be centered around his title reign, with the potential for more if McIntyre succeeds as champ.

“It’s been an incredible journey to get to the top and get the title, but this is when the hard work starts,” said McIntyre. “WWE is still bringing original content. Our wrestlers and our crew behind the scenes worked so hard to make sure our fans were entertained during WrestleMania. We’re still bringing smiles to people’s faces. That’s fun during the easy times, but I’m going to make sure WWE is represented in the right way right now. It’s a tough time in the world and everyone is affected, so this is where I’ll step up and work even harder.