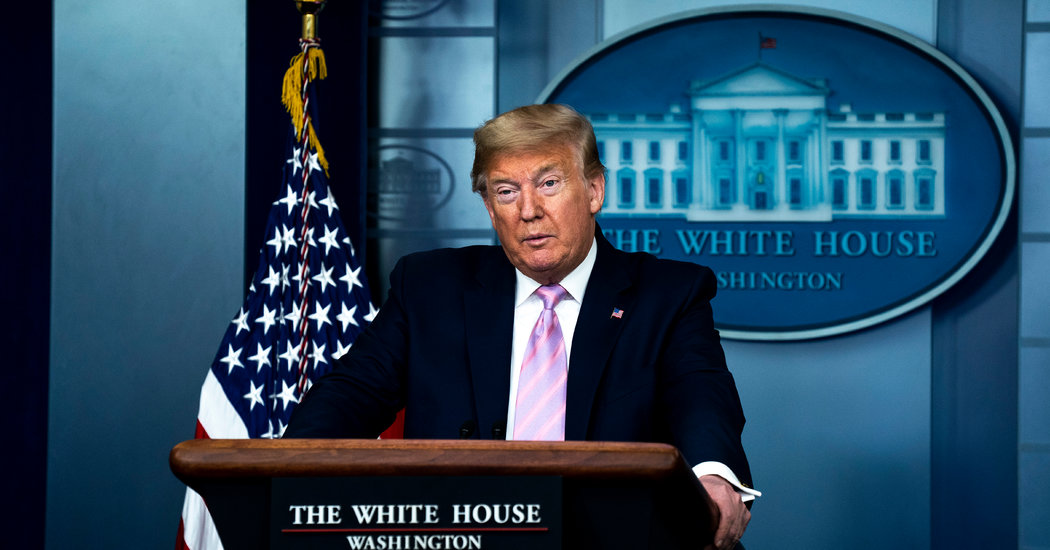 Although President Trump has expressed optimism that sports leagues could resume play “sooner than later,” sports leaders have been planning for a longer postponement of games and events, extending into the fall and possibly later.

After meeting with the commissioners of several major sports leagues on Saturday, Mr. Trump discussed resuming sports in August, ESPN reported, though Mr. Trump later told reporters at the White House, “I can’t tell you a date, but I think it’s going to be sooner rather than later.”

“I want fans back in the arenas,” he said at the White House, adding, “As soon as we can, obviously.’’

Still, a range of sports leaders and public officials have cast doubt on normalcy returning anytime soon, and even fall events face uncertainty over concerns that a renewal of mass gatherings could undermine any gains made in fight against the pandemic by then.

The N.F.L., which is scheduled to conduct its annual draft from April 23 to 25 by videoconference, has said it is focused on not altering the regular season, which is scheduled to begin on Sept. 10. But some team owners say there is a good chance the international games in London and Mexico City will be moved back to the United States, and one owner raised the possibility that the season could be reduced from 16 games to as few as 10.

An N.F.L. spokesman, Brian McCarthy, said the league’s decisions will be “guided by the latest advice from medical and public health officials, as well as current and future government regulations.”

“As long as we’re still in a place where when a single individual tests positive for the virus that you have to quarantine every single person who was in contact with them in any shape, form or fashion, then I don’t think you can begin to think about reopening a team sport,” Sills told NFL.com last week. “Because we’re going to have positive cases for a very long time.”

The N.B.A. and N.H.L., which were deep into their 2019-20 seasons before they were suspended last month, may be unable to finish their seasons because the cities they play in have restrictions on nonessential travel and because of the difficulty of acquiring enough test kits to ensure the safety of the players, team staffs and workers in arenas. Mike Bass, a spokesman for the N.B.A., which would have started its postseason on April 18, said, “Any decision on a date to restart the season is likely weeks away and will be made in consultation with public health experts and in line with governmental directives and guidance.”

Major League Soccer, which had started its regular season, and Major League Baseball, which had its spring training interrupted, are looking at truncated schedules. Both leagues have also contemplated playing games in empty stadiums, though it is unclear how risky that might be to players and to employees who produce the games. Officials in both leagues said they prefer to play with fans in the seats.

Either way, sports leagues and tournaments say they will let the advice of medical experts, not the president, guide their decisions on when to resume play.

“I hope so,” Mark Cuban, the owner of the Dallas Mavericks, said Monday when asked about Trump’s “sooner rather than later” forecast. “But I won’t do anything that doesn’t put the safety of our employees and customers first. Nothing is more important than their health.”

Indeed, the governors of two of the country’s largest states — California and New York, which together host more than 20 teams in the five largest leagues — said they were skeptical of the president’s timeline.

“I’m not anticipating that happening in this state,” Gov. Gavin Newsom of California said Saturday after the president spoke. “One has to be very cautious here, one has to be careful not to over promise.”

Gov. Andrew Cuomo of New York said he, too, will rely on guidance from medical experts.

“I would love to see sports back, help with cabin fever,” he said on Sunday. “But this is not about hopes and dreams and aspirations and what you would like to see. None of us like being here. Follow the data, follow the science, let the professional doctors, health care professionals tell you when it’s safe to reopen and that’s when you reopen.”

Epidemiologists have warned that even when the number of new cases starts to fall, travel barriers and curbs on gatherings in many places could persist until a vaccine or a treatment is found. The risk otherwise is a resurgence, given the prevalence of asymptomatic people who might unknowingly carry the virus.

Amid the uncertainty about when it will be safe to resume play, leagues and tournaments continue to come up with contingencies. The N.F.L. could delay the start of training camp and eliminate some or all of its preseason games and bye weeks to hold the Super Bowl, as scheduled, on Feb. 7, 2021, one N.F.L. owner said.

In college sports, the Pac-12 Conference will be guided by two factors: what public health and state officials say and what activities are allowed on campuses, a conference official said. For example, if students are not sitting in classrooms, players will not be sitting in meeting rooms.

Penn State athletic director Sandy Barbour told reporters in a conference call last week that she thought if players could safely return 60 days before the first game — essentially by around July 1 — then the season could proceed as scheduled. An N.C.A.A. spokesperson declined to respond to Mr. Trump’s assertion that sports were likely to return this summer.

The N.B.A. has explored bringing all the teams to Las Vegas to play games without fans, akin to the G League Showcase it stages there every December or its Summer League model.

But there are doubts about how the league could oversee a safe and effective quarantine for the players, coaches and the dozens, and perhaps hundreds, of other people needed to operate the games. The players would also need at least a month to get into playing shape after such a sudden and long layoff. Josh Hart of the New Orleans Pelicans said it was “just too hard” for the N.B.A. to resume operations “any time in the next two, three, four months.”

The N.H.L., which also was close to finishing its regular season, is checking with teams about the availability of arenas through August and other logistics to see if there is a chance to reschedule games.

Some organizations have already adjusted their calendars. On Monday, golf’s governing bodies rescheduled the Masters tournament, the United States Open and the P.G.A. Championship and canceled a fourth men’s major championship, the British Open. And the W.N.B.A. had already postponed the start of its regular season, which was to begin on May 15.

Three weeks ago, moving the major spring marathons to September and October seemed prudent. Now, a Sept. 14 date for the Boston Marathon (normally held in April), and a Nov. 1 date for the New York City Marathon look curious, though neither event has announced any change from those dates.

Chris Weiller, a spokesman for New York Road Runners, said, “It’s falling on the organizers to make decisions ahead of the direction of government.”

Major League Soccer, whose teams played two games before being shut down on March 12, has flexibility to move the M.L.S. Cup final back to Dec. 19 because it reorganized its schedule last season to trim its playoff format and move up its championship by one month.

The N.F.L. and M.L.S. are reluctant to play games in empty stadiums. But M.L.B., which was deep into spring training before it shut down, is willing to play without fans so games are at least televised.

Even without fans, the league would have to find enough coronavirus tests for the players, coaches, trainers, support staff, television production crews and other personnel. The league would need the approval of the players’ union if it chooses to play in empty stadiums.

The league has no plans to cancel big chunks of the season. Rather, it would cancel small pieces as it goes along. The league is also considering playing at neutral sites for regular season and postseason games.