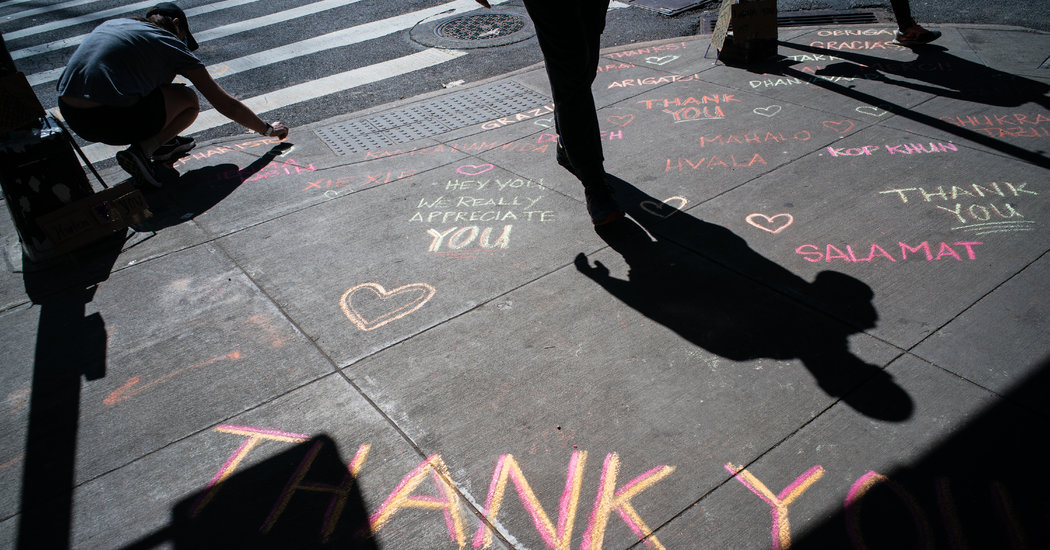 New York, the epicenter of the global coronavirus outbreak, has begun to show the first signs of controlling the crisis: Its staggering death and hospitalization rates have started to stabilize, according to figures released by Gov. Andrew M. Cuomo on Monday.

But striking a note of optimistic caution, Mr. Cuomo warned that the state’s progress could continue only if New Yorkers, like those around the world, maintained a sense of discipline and suppressed their natural impulse to gather in the parks or on the streets, especially as the spring weather starts improving.

“We get reckless,” Mr. Cuomo said at his daily news briefing, “you will see these numbers go up again.”

The governor’s mixed assessment came as the pandemic entered its second month and neared what federal officials called a crucial moment for determining its future. The seesawing nature of the crisis was apparent in the fact that the stock market had one of its biggest rallies of the year on Monday, with the S&P 500 closing up 7 percent, even as the death toll in the United States surpassed 10,000.

Across the country, many states were still reporting alarming increases in cases that were straining hospitals. Federal officials, who have cited projections indicating that the virus could ultimately kill more than 100,000 people nationwide, warned that the next few days could bring a ghastly uptick in the number of deaths and infections.

In Florida, Indiana and Louisiana, the number of fatalities attributed to the virus more than doubled in a week. The deaths in Louisiana, which have surpassed 500, have overwhelmed funeral homes, and Gov. John Bel Edwards said the state could run out of ventilators as soon as this week.

At the same time, he noted that new daily hospitalizations were down. “This is not the time to become lax and ease up,” Mr. Edwards said.

There have also been signs that the situation may be improving on the West Coast, where the virus first surged in the United States.

In California, Gov. Gavin Newsom announced on Monday that the state would donate 500 ventilators to the Strategic National Stockpile to be used by other states where the situation is more severe. California, which only a month ago had the most confirmed cases of the virus in the nation, now has the fourth highest number of cases, with a slower pace of spread. The governors of Oregon and Washington also planned to send ventilators for use elsewhere.

“We’re meeting this moment with compassion,” Mr. Newsom said. “I know that if the tables were turned and we were experiencing a hospital surge, other states would come to our aid.”

Outside the United States, Western Europe reached its own important turning point on Monday: While the total number of patients on the continent continued to climb, the rate of new infections was no longer rising.

The shift seemed clearest in Europe’s two most battered countries, Italy and Spain, where the daily number of deaths has been running into the hundreds and where the number of infections is well above 100,000.

Elsewhere in the world, however, developments were grimmer.

In Britain, Prime Minister Boris Johnson was moved into intensive care on Monday night, one day after being admitted to the hospital for coronavirus testing. Britain also reported more than 5,900 new infections on Sunday, its highest single-day total so far.

With the number of its own new cases also rising sharply, especially in Tokyo, the Japanese government announced on Monday that it was declaring a state of emergency in seven prefectures that included the country’s largest population centers.

Nearly three months into the outbreak, Japan continued to record new daily highs in confirmed infections, with the health ministry announcing 383 more on Monday. Japan’s total number of cases has more than doubled, to 3,654, in the last eight days.