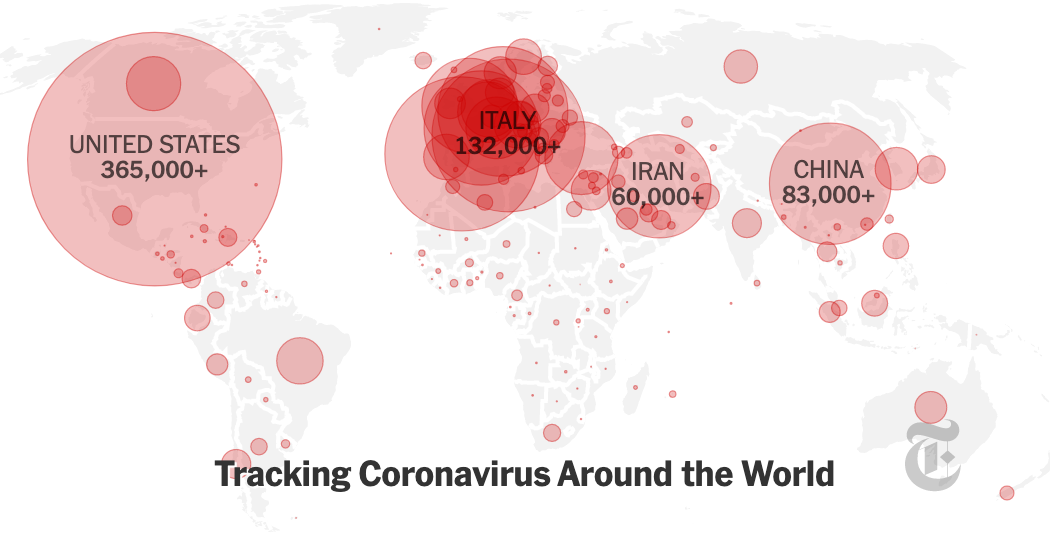 Where we are now: Bracing for the worst

There is a terrible week ahead in America — one of “death” and “sadness,” the White House has warned — as the number of confirmed coronavirus cases in the U.S. surged above 350,000 on Monday, the national death toll exceeded 10,000, and public health officials cautioned that even those grim numbers understated the true scale of the epidemic.

The U.S. is now by far the hardest-hit nation in the world, with more confirmed cases than the next three — Spain, Italy and China — put together. And the New York City area is the hardest-hit part of America, with hundreds of deaths daily and harrowing scenes of panicked doctors and besieged hospitals.

Though the crisis is showing signs of starting to level off in the city (more about that below), it is still growing explosively in places like Los Angeles, Miami and New Orleans. A halting federal response has left states and counties fighting with one another for critical supplies and imposing quarantines on each other’s residents.

The global pandemic shows little sign of letting up. At least 188 countries and territories have now reported five or more cases; many are in the early stages of outbreaks they are not well equipped to handle. But here and there are signs of progress: Death rates seem to be slowing in Italy and Spain, while countries like Singapore and South Korea show clear success in limiting new cases.

Is New York approaching its peak?

The spread of the virus in New York is beginning to stabilize, Gov. Andrew M. Cuomo said on Monday, and the state’s data seems to support that idea.

The state’s death tolls on Sunday (594) and Monday (599) were both lower than on Saturday (630). The numbers of people hospitalized and in intensive care units are still growing, but the growth rate appears to be slowing.

Joseph Goldstein, who covers health care in New York for The Times, says those figures should be taken with a grain of salt. The hospitalization rate might be slowing if overwhelmed facilities are sending more patients home, he said, and there are signs that deaths are being undercounted — for instance, by leaving out people who die at home.

Mr. Cuomo said he thought the daily tally of new cases might crest this week. But he warned New Yorkers that a positive trend could only continue if they maintained strict social distancing.

Even if the epidemic is starting to plateau, it is still overwhelming. A municipal official said New York City was running out of capacity to handle all the deaths, and might have to start burying people temporarily in city parks.

The peak of the epidemic might come later in the city than in the state. “May could be worse than April,” Mayor Bill de Blasio said. And as some experts have pointed out, the day after the peak will still be the second-worst day of the outbreak.

What will it take for the U.S. to reopen?

Until there’s a vaccine or an effective treatment for Covid-19, any projected date for the crisis to end is only a guess. But experts have come up with four benchmarks to indicate whether a state is on its way to recovery. The criteria were published in a recent report.

1. Hospitals must be able to treat all patients who need care, without resorting to crisis expedients.

This is the most immediate test. It’s not clear yet that any U.S. state has passed the point of peak demand for hospital care.

2. The state must be able to promptly test everyone who has symptoms, at a minimum.

That would mean performing about 750,000 tests a week across the country — and that’s once the situation has calmed considerably.

3. The state must be able to monitor all its confirmed cases and contacts.

Public health workers need to be able to trace the recent close contacts of everyone who tests positive and have them go into isolation or quarantine until it’s determined they’re not infected.

4. The number of new cases in the state must drop steadily for at least 14 days.

Such a trend would suggest that the state has achieved suppression — meaning that, on average, each patient is passing the virus along to fewer than one other person. When that’s true, the state’s case count will begin dropping exponentially, just as it rose.

Does your county have an epidemic?

As the coronavirus spreads silently through American cities and towns, people sometimes struggle to understand the scope of the outbreak — especially if they live in places that still have few reported cases.

According to a new study by disease modelers at the University of Texas at Austin, even in counties with just a single reported case, the odds are greater than 50-50 that a sustained outbreak — an epidemic — is already spreading undetected.

Using data from the study, The Times mapped the likelihood of an epidemic in every U.S. county.

Create new holiday traditions. Hide eggs or jelly beans around the house. Have an older relative coach children in cooking over a video call. Think of more showing, sharing, singing and games.

Help the helpers. Here are ways to (safely) help medical workers, including sending them food and protective equipment and offering them a place to stay.

Put your pantry in order. Step one is to make a mess: Pull everything out and clean the shelves. Our step-by-step guide will walk you through what to do next.

Distract yourself. Watch our short film of the day, or lose yourself in one of these four new crime novels.

My grandchildren live only a few blocks away, but it might as well be hundreds of miles during the quarantine. My second-grade granddaughter and I have decided to read a Magic Tree House book together and discuss it “book club-style” using FaceTime.