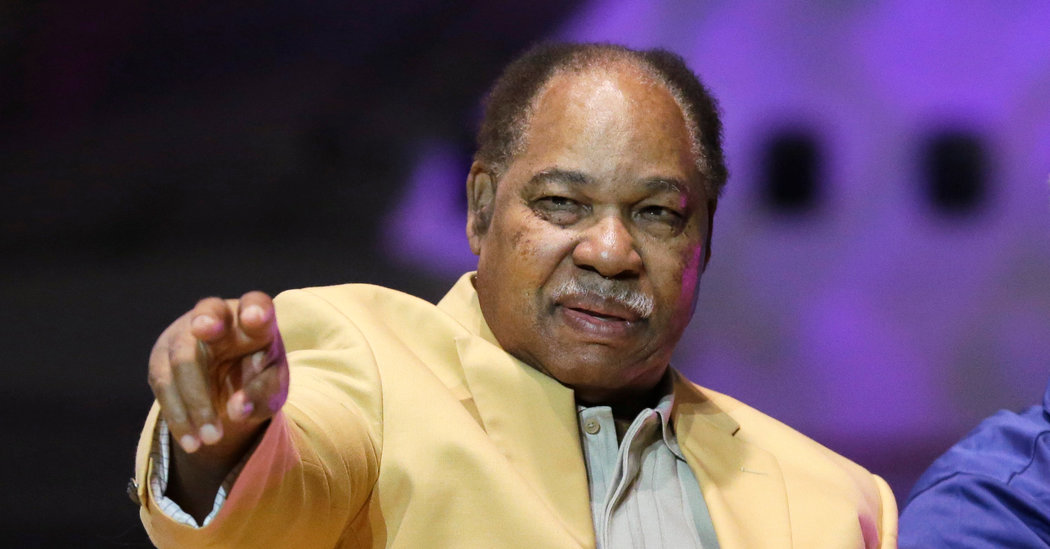 Bobby Mitchell, the Hall of Fame receiver and running back who in 1962 became the Washington Redskins’ first African-American star when the team yielded to pressure from the Kennedy administration and ended its resistance to signing black players, died on Sunday. He was 84.

His death was announced by the Pro Football Hall of Fame, which did not provide details.

“The game lost a true legend today,” David Baker, the Hall of Fame’s president and chief executive, said in a statement. “Bobby was an incredible player, a talented executive and a real gentleman to everyone with whom he worked or competed against.”

Mitchell played four seasons with the Cleveland Browns and seven with the Redskins, the last N.F.L. team of his time to integrate.

Fast, elusive and versatile, he scored 91 touchdowns, amassed more than 14,000 net yards, was named to the Pro Bowl four times and was voted to the N.F.L.’s all-decade team for the 1960s.

When he retired after the 1968 season, Mitchell became a Redskins scout and later their assistant general manager. But in his 34 years in the front office, he was passed over for the general manager’s post when there were vacancies. He told attendees at a Pro Football Hall of Fame luncheon in 1989 that he was denied the promotion twice, and that team owners paid only “lip service” to their professed goal of providing more coaching and front-office opportunities for black people.

“Bobby Mitchell was one of the greatest all-around ballplayers,” Lenny Moore of the Baltimore Colts, a contemporary and fellow Hall of Famer, was quoted as saying on the Redskins’ website. “Anybody who can transition himself and be one of the best in the business at both positions, that’s saying something.”

Selected by the Browns in the seventh round of the 1958 N.F.L. draft, out of Illinois, Mitchell, at 6 feet and 190 pounds, played halfback alongside fullback Jim Brown, perhaps the greatest runner in N.F.L. history, and also caught passes.

The Redskins were floundering when Mitchell joined them. Their owner, George Preston Marshall, who grew up in Washington and attended segregated schools, had refused to improve his team’s fortunes by obtaining black players; he was unwilling to jeopardize revenue from the Redskins’ TV and radio broadcasts, which were carried by dozens of stations in the segregated South in the years before the N.F.L. had national TV contracts.

“We take most of our players out of Southern colleges and are trying to appeal to Southern people,” Marshall told The New York Times in 1961. “Those colleges don’t have any Negro players.”

When President John F. Kennedy took office in January 1961, the Redskins were preparing to leave Griffith Stadium, their longtime home, and move into the new D.C. Stadium (later named for Robert F. Kennedy), which was built on land affiliated with the Interior Department’s national park system.

When Stewart L. Udall, the interior secretary, threatened to revoke the Redskins’ lease if they did not obey federal anti-discrimination laws, Marshall promised to obtain black players, and the N.F.L. gave him a year to comply.

The Redskins selected Ernie Davis, the Heisman Trophy-winning running back from Syracuse, who was black, as the first overall pick in the N.F.L. draft for the 1962 season. Fearing Davis’s prospective salary demands, Marshall traded his signing rights to the Browns, getting Mitchell as the key acquisition in the deal.

When the Redskins opened their 1962 season, Mitchell was among three black players taking the field for them, but the only marquee figure in that group. He caught two touchdown passes in the Redskins’ first home game, a 24-14 victory over the St. Louis Cardinals, and went on to lead the N.F.L. in receptions (72) and receiving yards (1,384).

Davis never played pro football. He was found to have leukemia in the summer of 1962 and died the following May.

Mitchell was “received enthusiastically and with open arms” by his teammates, said Norm Snead, the Redskins’ quarterback when Mitchell joined them, in Thomas G. Smith’s “Showdown” (2011), an account of the team’s racial controversy.

Snead “was just great, he just wanted to throw the ball to a guy who could go get it,” Mitchell said. But the pressures to perform amid the racial turmoil weighed heavily on Mitchell, and he felt that some teammates were jealous of his being the Redskins’ highest-paid player.

In Alan H. Levy’s “Tackling Jim Crow” (2003), Mitchell recalled racial taunts from some Redskin fans. “It affected me greatly,” he said. “I haven’t forgotten them.”

Robert Cornelius Mitchell was born on June 6, 1935, in Hot Springs, Ark., one of eight children of the Rev. Albert and Avis Mitchell.

He was a four-sport athlete in high school, then became an all-Big Ten back at Illinois and a track and field star in the hurdles and sprints.

Mitchell retired from pro football with 65 touchdown receptions, another 18 rushing, three on punt returns and five on kickoff returns. He amassed 7,954 receiving yards and 2,735 yards rushing.

But his Browns teams made the playoffs only once, and his Redskin squads never even had a winning record.

Mitchell and his wife, Gwen, who survives him, had a son, Robert Jr., and a daughter, Terri. A complete list of survivors was not immediately available.

Mitchell supported civil rights and civic and charitable causes over the years.

Robert Kennedy, the president’s brother and attorney general, became friends with Mitchell and asked him to help dedicate a John F. Kennedy Playground in a Washington neighborhood about a month after the Kennedy assassination in 1963.

Mitchell told Sports Illustrated that an emotionally devastated Kennedy, his hands shaking, gripped his hand at the groundbreaking, saying, “I don’t think I can do this.” He handed the shovel to Mitchell, distraught in his own right, and they gripped it together.

“I was so nervous,” Mitchell recalled. “I must’ve thrown that dirt 50 feet over my head behind me.”