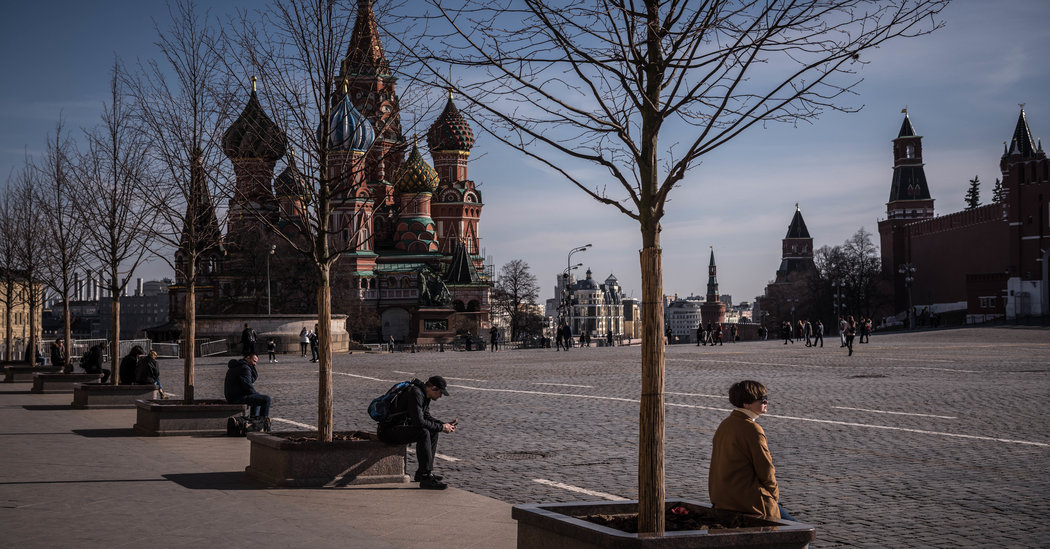 CAIRO — When the virus hit, the strongmen hit back as they know best.

For Egypt’s president, Abdel Fattah el-Sisi, that meant deploying chemical warfare troops, clad in protective suits and armed with disinfectant, to the streets of Cairo, in a theatrical display of military muscle projected via social media.

Russia’s leader, Vladimir V. Putin, donned the plastic suit himself, in canary yellow, for a visit to a Moscow hospital for coronavirus patients. Then he dispatched to Italy 15 military planes filled with medical supplies and emblazoned with the slogan “From Russia with Love.”

President Recep Tayyip Erdogan of Turkey, a prodigious jailer of journalists, locked up a few reporters who criticized his early efforts to counter the virus, then sent a voice message to the phone of every citizen over 50, stressing that he had everything under control.

And in Turkmenistan, one of the world’s most repressive countries, not a single infection has been officially declared, while the president for life, Gurbanguly Berdymukhamedov, promoted his book on medicinal plants as a possible solution to the pandemic.

In responding to the coronavirus pandemic, the world’s autocrats are turning to their tried-and-tested tool kits, employing a mixture of propaganda, repression and ostentatious shows of strength to exude an aura of total control over an inherently chaotic situation.

In the immediate term, the crisis offers an opportunity for autocrats to taunt rivals or entrench their already vast powers with little risk of censure from a distracted outside world, where the scramble to contain the pandemic has forced even liberal democracies to consider harsh measures, such as invasive cellphone surveillance systems.

“Coronavirus is the new terrorism,” said Kenneth Roth, executive director of Human Rights Watch, who fears that a sweeping expansion of draconian powers could become the virus’s enduring legacy. “It’s the latest pretext for rights violations that I fear will persist long after the crisis ends.”

Yet the virus also brings potential perils for the strongmen. Countries like Russia and Egypt are at the front end of the virus curve, meaning the worst is likely a matter of weeks away.

If the crisis is as bad as the one sweeping Europe and the United States, their usual tools may be of limited use. The virus cannot be arrested, censored or outlawed. The economic toll of a pandemic will strain the patronage networks that underpin many autocracies. Leaders who portray themselves as saviors are more exposed to blame if the death toll soars.

And while few analysts predict immediate upheaval, especially as public anxiety grows, a devastating pandemic could rattle faith in leaders whose authority rests on an edifice of unchallenged dominance.

“It could go either way,” said Steven A. Cook, a senior fellow for the Middle East and North Africa at the Council on Foreign Relations. “In some places, you could end up with a narrow, nastier dictatorship. In others, the whole thing could come apart.”

In some countries, the crisis has given a good name to strong, intrusive rule. The United Arab Emirates, an oil-rich autocratic monarchy, passed Iceland this week as the country with the world’s highest per capita coronavirus testing rate. A smartphone app used by Singapore to track infected citizens is being considered by several Western countries.

And in restive countries, the virus has sapped the power of dissent. Popular revolts in Lebanon, Iraq, Algeria and Chile slowed or sputtered to a halt in recent weeks and, given the health risks associated with public gatherings, are unlikely to regain momentum soon.

Autocratic leaders, meanwhile, have capitalized on the crisis to crack down on domestic dissent and play up their favored tropes. In a speech last week, Mr. el-Sisi denounced critics of his virus efforts as lackeys of the outlawed Muslim Brotherhood. His security services expelled from Egypt a reporter for The Guardian over an article that questioned the official toll.

In Russia, Mr. Putin’s officials initially tried to blame the crisis on wine-sipping Russian jet-setters, out of touch with vodka-drinking ordinary Russians, who imported the virus from skiing trips in Europe. “A suitcase of viruses was brought in from Courchevel,” said the mayor of Moscow, Sergei Sobyanin, referring to the French ski resort popular with Russian glitterati.

Even as Russian military supplies landed in Italy, the Kremlin’s chief propagandist, Dmitri Kiselyov, seized on the health crisis to declare that the European Union was dead.

But the pandemic has also scrambled the plans of those same strongmen.

Mr. Putin was forced to cancel a referendum that would have allowed him to remain in power until 2036. A delivery of Russian aid to the United States on Wednesday was accompanied by less crowing than the one to Italy because infections in Russia were soaring.

Mr. el-Sisi’s government quietly announced that the virus had killed two of its most senior generals, fueling speculation that the disease has spread widely in the military high command. This week, after Egypt announced it would make Egyptians returning from abroad pay for their own quarantine in luxury hotels, calls erupted on social media for Mr. el-Sisi to turn his lavish palaces into quarantine centers.

The president quickly backtracked, and promised the government would pay for the quarantine.

In many such countries, citizens already suspect their leaders of hiding the truth about the extent of infections. Where institutions are hollowed out, leaders are left surrounded by a small circle of advisers and boosters — arguably a good system for silencing opponents but a poor one for making hard, science-based decisions.

“Germs don’t respect censorship,” said Mr. Roth of Human Rights Watch. “The censorship might stop the momentary criticism, but it could fuel the public health crisis.”

The prospect of a virus-induced global recession, which the International Monetary Fund says is already upon us, has caused some analysts to speculate that the Middle East could see a fresh wave of Arab Spring-style uprisings.

Others say that is unlikely, at least in the short term. Citizens worried for their lives are more likely to support draconian measures, even at the cost of compromising their freedoms.

“We won’t see the political fallout until after the health crisis starts to abate,” said Michele Dunne of the Carnegie Endowment for International Peace.

If anything, the crisis is creating new authoritarian rulers. This week Hungary’s Parliament handed sweeping powers to the far-right populist leader Viktor Orban, allowing him to rule by decree indefinitely, ostensibly so he can fight the coronavirus.

As with established authoritarians, the worry is that Mr. Orban will be loath to hand back his new powers once the crisis has passed — a concern echoed in the Philippines, where the authoritarian right-wing leader Rodrigo Duterte last week declared a six-month “state of calamity.”

Yet in such fluid moments, little is predictable. In Egypt, Ms. Dunne noted, rare protests against Mr. el-Sisi last September were fueled by accusations that his family was living lavishly.

Any perception in the coming months that Mr. el-Sisi or the military are favoring his close circle in dealing with the coronavirus, she said, “could have repercussions.”