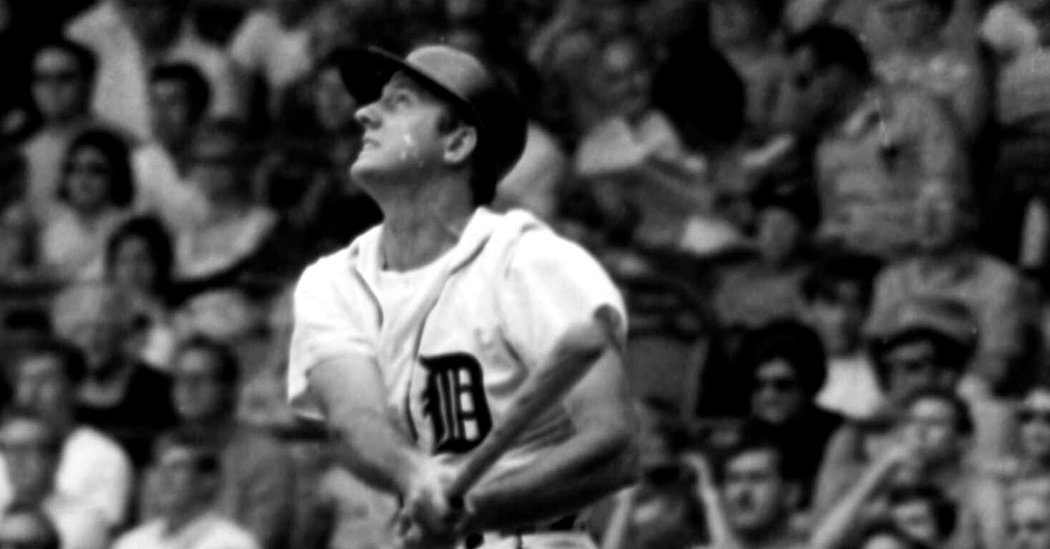 Al Kaline, one of baseball’s finest hitters and defensive outfielders whose Hall of Fame career spanned 22 seasons with the Detroit Tigers, died on Monday at his home in Bloomfield Hills, Mich. He was 85.

His son Mark confirmed the death. No specific cause was given.

Kaline lacked the charisma of a Mickey Mantle or a Willie Mays, and he played on only one World Series championship team, but he was among baseball’s premier figures of his era.

Renowned for his powerful arm, Kaline won 10 Gold Glove awards for his play in right field and sometimes in center. He set an American League record for outfielders by playing in 242 consecutive games without an error. He played in 2,834 games from 1953 to 1974, the most of any Tiger, and only Ty Cobb equaled his 22 years with the team.

Billy Martin, his manager late in his career, referred to Kaline as Mr. Perfection, but his achievements came in the face of twin obstacles. He encountered the pressure of comparisons with Cobb, one of baseball’s greatest players, and he had been hampered since childhood by the bone disease osteomyelitis.

“When you talk about all-around ballplayers, I’d say Kaline is the best I ever played against,” the Baltimore Orioles’ Hall of Fame third baseman Brooks Robinson told United Press International in September 1974 as Kaline approached his career’s final days.

Albert William Kaline was born on Dec. 19, 1934, into a working-class family in Baltimore that was determined to see him become a major league ballplayer. His father, Nicholas, two uncles and a grandfather had been semipro catchers on Maryland’s Eastern Shore.

“Even though my family could have used the money I might have made at odd jobs, my father would never let me earn a dime,” Kaline once told The Detroit News. “I never had to take a paper route or work in a drugstore or anything. I just played ball.”

When Kaline was 8 years old, doctors removed two inches of bone from his left foot to ease his osteomyelitis, leaving scars, a deformity and discomfort when he took the field. But that didn’t deter the young Kaline, who sometimes played for five teams at the same time in Baltimore.

“I’d play a game in one end of town, then my father or uncle would drive me to another game,” he recalled. “I would change uniforms in the car on the way. Sometimes I’d play three games in a day. I never got enough.”

Kaline signed with the Tigers in June 1953, a few days after graduating from Southern High School in Baltimore, where he batted over .400 in three of his four seasons. He never spent a day in the minor leagues.

He was soon a fixture in Detroit, sometimes known simply as Six, for his number. At 6 feet 2 inches and a trim 180 pounds, he lacked the classic mold of many a power hitter. But he squeezed rubber balls to strengthen his hands and relied on superb timing and his study of pitchers out of his right-handed stance. He hit .300 or better seven times between 1955 and 1963.

Kaline finally reached the World Series in 1968, when the Tigers played the St. Louis Cardinals. He had broken an arm when he was hit by a pitch in late May, sidelining him for six weeks, and Jim Northrup had replaced him in right field. But Kaline got his batting form back late in the season, and Manager Mayo Smith moved Mickey Stanley from center field to shortstop for the Series in place of the light-hitting Ray Oyler, switched Northrup from right field to center and put Kaline in right.

In Game 5, with the Tigers down 3 games to 1 and trailing in the game by 3-2, Kaline delivered a two-run single that gave the Tigers the lead, and they went on to win in seven games behind the pitching of Mickey Lolich and Denny McLain. Kaline hit .379 for the Series with two home runs and eight runs batted in.

He reached the postseason only one more time, when the Tigers lost to the Oakland A’s in the 1972 American League Championship Series.

After retiring as a player, he was a longtime commentator for the Tigers’ television broadcasts and then a special assistant in the team’s front office.

When Detroit played its last game at Tiger Stadium, in September 1999, Kaline brought the lineup card to home plate, receiving a standing ovation. He is honored with a bronze statute behind the center-field wall at Comerica Park, where the Tigers play today.

In addition to his son Mike, he is survived by his wife, Madge Louise (Hamilton) Kaline; another son, Mark; and four grandchildren.

Early in Kaline’s career, Ted Williams raved about him. “In my book he’s the greatest right-handed hitter in the league,” Sports Illustrated quoted Williams as saying. “There’s no telling how far the kid could go.”

But Kaline, as baseball’s youngest batting champion — Cobb was slightly older when he won the title in 1907 — faced heavy burdens.

“The worse thing that happened to me in the big leagues was the start I had,” Kaline told Sports Illustrated in 1964. “Everybody said this guy’s another Ty Cobb, another Joe DiMaggio. How much pressure can you take?”

Kaline performed brilliantly nonetheless, and on Sept. 24, 1974, just before his career came to a close, he doubled off the Orioles’ Dave McNally at Baltimore’s Memorial Stadium for his 3,000th hit, the hometown boy back in town to achieve a rare baseball feat.