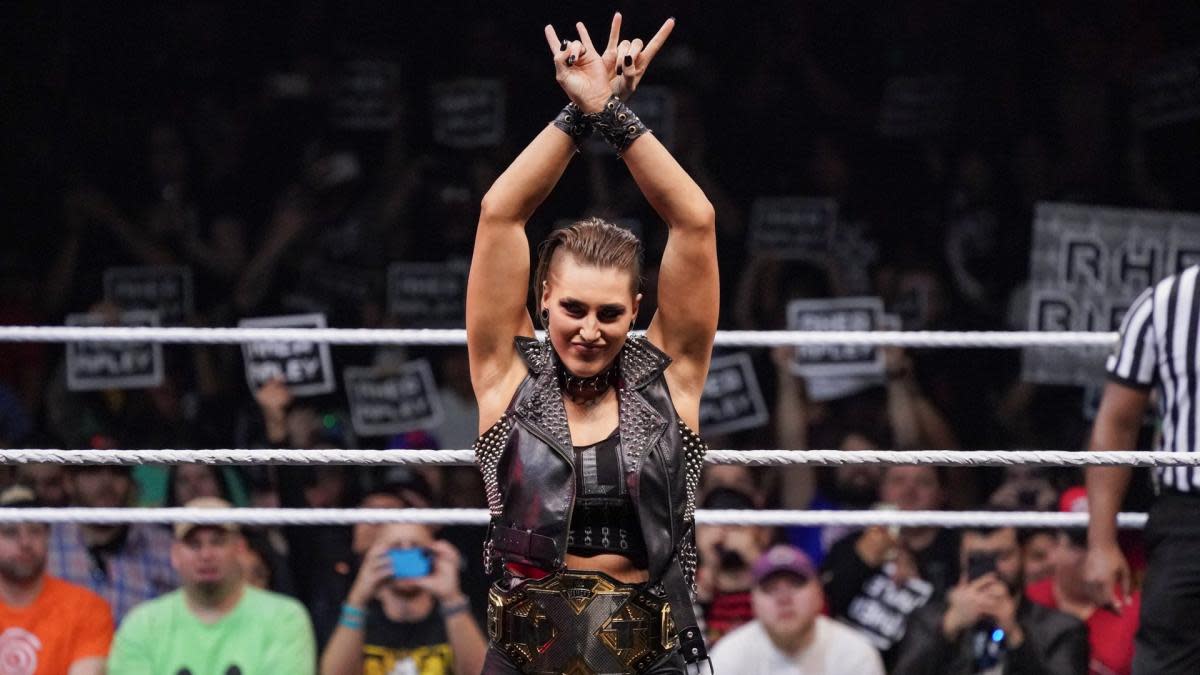 Rhea Ripley has enjoyed a meteoric rise through the WWE ranks since late in 2019, leading to the biggest match of her career: an NXT Women’s Championship defense against Charlotte Flair at WrestleMania 36.

Although not quite yet a household name in wrestling, that will change in a hurry with a WrestleMania victory against Flair.

Though WWE has shown confidence in Ripley for years now (she became the first-ever winner of the NXT UK women’s title in August 2018), her run in NXT since returning stateside in August 2019 has shown her true star power. She impressed at Survivor Series in November and added to her collection of gold by defeating Shayna Baszler for the NXT Women’s Championship in December. But she remains relatively inexperienced, having only performed on a total of three TakeOver shows before her date with destiny at WrestleMania.

Here is a quick guide to the woman battling Charlotte Flair at WrestleMania 36.

Born on October 11, 1996 as Demi Bennett in Adelaide, South Australia, the 23-year-old Ripley is already a seven-year veteran of pro wrestling. She made her NXT debut in October 2017.

Tegan Nox’s loss was Ripley’s gain in the 2018 Mae Young Classic. Ripley had been booked to lose to Nox in the quarterfinals of the tournament. When Nox tore her ACL and MCL during the match and could no longer compete, the match was awarded to Ripley. That unfortunate circumstance provided Ripley with an opportunity to reshape her future in the next round of the tournament against Io Shirai.

Triple H, Sara D’Amato and Matt Bloom were all thoroughly impressed by Ripley’s performance in the match with Shirai, so they sent her to NXT UK, where she had the opportunity to work more closely with WWE coaches. When she returned to NXT, the plan was to have her eventually challenge, and dethrone, Shayna Baszler.

Not as tall as she appears

Ripley is 5’7″, but she presents herself as a daunting, intimidating force in the ring. The height differential will be more noticeable against Charlotte Flair, who is 5’10”.

From the beginning, Ripley excelled at the Performance Center

Internally, there were incredibly high hopes when WWE moved Ripley to the Performance Center in Orlando.

Ripley learned in a physical, demanding environment as one of only two women in Coach Scott Garland’s class at the Performance Center. Garland, best known from his days as Scotty Too Hotty, challenged Ripley and helped develop her into a tougher, more cerebral performer.

“I got one when I won the NXT UK Women’s Championship, and I was legit so excited,” Ripley told Sports Illustrated in December. “I had this massive cheesy grin and I hated myself for it. I was like, ‘I can’t believe you made yourself like a goober in your one chance with the Triple H photo.’ So I’m glad that I got a second chance.”

Ripley defeated Baszler for the title in the main event of an episode of NXT on USA in December. The entire bout was electric, especially the finishing sequence. Ripley delivered her signature Riptide—a pumphandle powerbomb—to Baszler off the second rope to secure the win.

Ripley flawlessly executed that finishing spot off the middle rope, crediting Cesaro–who happened to be in the Performance Center as Ripley was working on her match–with a massive assist in creating that spot.

“Cesaro helped me how to get it from the top,” Ripley told Sports Illustrated. “My finisher, Riptide, is hard enough to do in the ring, let alone on two little ropes, and Cesaro helped me figure it out how to do it from there. We were at the PC struggling with it and he came out of nowhere to help.”

Ripley showcased her talent this past November at Survivor Series, which was her first WWE pay-per-view. The match against Flair is her WrestleMania debut.