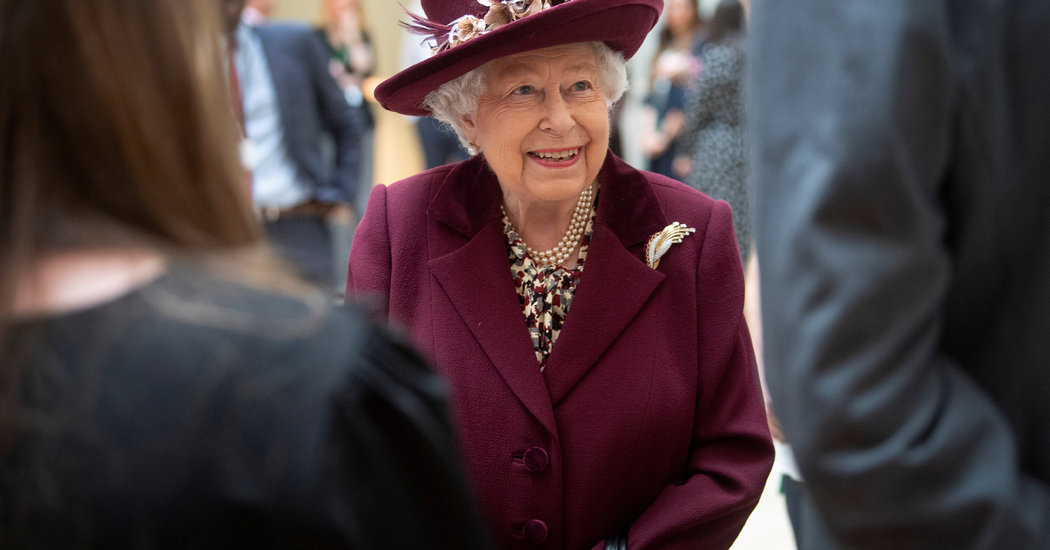 LONDON — Queen Elizabeth II, in a rare televised address on Sunday evening, sought to rally her fellow Britons to confront the coronavirus pandemic with the resolve and self-discipline that have seen the nation through its greatest trials.

“I am speaking to you at what I know is an increasingly challenging time,” the queen said in taped remarks from Windsor Castle, where she has sequestered herself against a virus that has infected at least 40,000 people in Britain, including her eldest son and heir, Prince Charles, and Prime Minister Boris Johnson.

The queen called it “a time of disruption in the life of our country: a disruption that has brought grief to some, financial difficulties to many, and enormous changes to the daily lives of us all.”

It was only the fourth time in her 66-year reign that the queen has addressed the British people, apart from her annual Christmas greeting — and it carried a distinct echo of the celebrated radio address her father, George VI, delivered in September 1939, as Britain stood on the brink of war with Germany.

The queen’s speech, like the king’s eight decades ago, appealed to the quintessential British traits of stoicism and solidarity. It is meant to pull the country together to vanquish an enemy that brings death not in the terrifying bombing raids of the Blitz but in the ordinary encounters of people transmitting a dangerous pathogen.

“I hope in the years to come, everyone will be able to take pride in how they responded to this challenge,” the queen said, “and those who come after us will say that the Britons of this generation were as strong as any. That the attributes of self-discipline, of quiet good-humored resolve and of fellow-feeling still characterize this country.”

Buckingham Palace took extraordinary measures to protect the queen, who turns 94 this month, from infection. She recorded the speech in a large room with only a single camera operator, according to a palace official. The operator wore a mask and gloves while a skeleton crew monitored from another room.

Fears for the queen’s health grew after Prince Charles announced two weeks ago that he was suffering mild symptoms of the virus. He had met his mother on March 12, only a day before his medical advisers assessed that he might have been infectious.

After isolating himself for seven days at Birkhall, his residence in Scotland, Charles re-emerged, via a video link from Scotland, to dedicate a new field hospital for coronavirus patients that was constructed in less than two weeks in a cavernous convention center in London’s Docklands.

Mr. Johnson remains in isolation in his flat next door to 10 Downing Street, where officials said he was still running a high temperature. On Saturday, his 32-year-old girlfriend, Carrie Symonds, disclosed that she, too, is suffering symptoms. Ms. Symonds is pregnant; the couple announced last month that they were engaged.

Other senior officials, including the health secretary, Matt Hancock, and the chief medical officer, Chris Whitty, have also had to isolate themselves because of symptoms.

With 41,903 confirmed cases, and 4,313 deaths, Britain appears to be following the same grim trajectory as other European countries.

The British government, however, came late to the need for social distancing, with Mr. Johnson initially balking at ordering pubs and restaurants to close. He is now an ardent convert and recorded a video from his quarantine urging people — without much success — not to flock to London parks during a sun-kissed spring weekend.

The queen has expressed no qualms about cutting social contacts. She canceled her public schedule and left Buckingham Palace on March 19, four days before Mr. Johnson ordered a lockdown across the country.

Her 98-year-old husband, Prince Philip, was flown to Windsor Castle by helicopter from his residence on the grounds of Sandringham, another of the queen’s residences.

After Prince Charles announced his illness, Buckingham Palace said the queen was healthy. But it has not issued any updates on her condition. The palace did not comment on a recent report in a British tabloid, The Sun, that one of the queen’s footmen, who walks her dogs, had contracted the virus.

Although the royal family has endured a litany of bad news in the last year — from the bitter departure of Prince Harry and his wife, Meghan, to the messy dealings of Prince Andrew with the disgraced financier and convicted sexual predator, Jeffrey Epstein — the queen remains a revered figure among many Britons.

She has used her lofty stature sparingly outside of her official schedule of investitures, diplomatic receptions and regular meetings with the prime minister (she and Mr. Johnson conducted their most recent one by phone).

Her speech included familiar touches, like an expression of thanks to the doctors and nurses of the National Health Service, something she has done in countless statements after natural disasters. At 8 p.m. every Thursday, people now gather at their windows or doorways to applaud the health workers.

By custom, the queen addresses the nation on Christmas Day. The only other times that she has given a televised address were in 1991 during the Persian Gulf war, before the funeral of Princess Diana in 1997, and after the death of the Queen Mother in 2002.

But the demands of social distancing have prevented the queen from playing the kind of highly visible role that she and previous monarchs have played during national emergencies. Her father and mother, Elizabeth, toured neighborhoods that had been bombed by the Germans during the Blitz in 1940 and 1941.

Elizabeth, who was known later as the Queen Mother, said after Buckingham Palace was bombed in September 1940 that she could “look the East End in the face,” referring to the working-class neighborhoods of East London.

Princess Elizabeth, the future queen, worked in the auxiliary service as a driver and truck mechanic during World War II. That experience left a lasting imprint on her and makes her a living link to Britain’s wartime experience.

Her speech, with its appeal to national solidarity but also its blunt acknowledgment of the trials to come, had many of the same themes as her father’s address, memorialized in the 2010 film, “The King’s Speech,” which starred Colin Firth as George VI and Geoffrey Rush as his speech therapist.

“In this grave hour, perhaps the most fateful in our history,” the king said in halting cadences, “I send to every household of my peoples, both at home and overseas, this message.”

The coming conflict, he said, “will be hard. There may be dark days ahead, and war can no longer be confined to the battlefield.”