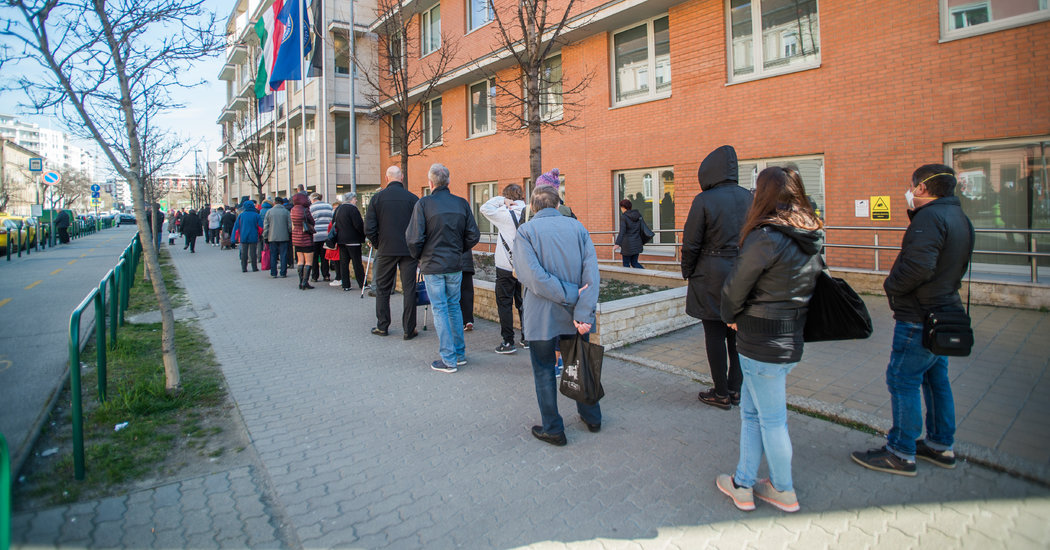 BUDAPEST — In the days since the Hungarian Parliament gave Prime Minister Viktor Orban the right to rule indefinitely by decree, nominally in the name of combating the coronavirus pandemic, his government has been energized by much other than the disease.

First, his deputy briefly toyed with a plan to strip powers from city mayors, many of whom represent opposition parties. Then he threw a cloak of secrecy over one of Hungary’s most expensive infrastructure projects, announcing a bill that would classify key information about a Chinese-funded railway for a decade. Next, he slashed bureaucratic obstacles to expedite a contentious construction project opposed by the opposition. Finally, he announced plans to scrap state recognition of gender transition.

By comparison, Mr. Orban took a gentler approach to testing for the coronavirus.

By Saturday, Hungarian officials had detected fewer than 700 cases, one of the lowest tallies in the European Union. The chief medical officer, Cecilia Muller, also said that the disease was still spreading only within clusters of people, rather than through the general population at large. On Sunday, reported cases grew to 733.

But some doctors fear that the numbers are only so low because the government has tested so few people. By Saturday, officials had conducted fewer than 20,000 tests — also one of the lowest totals, as a proportion of the national population, in the European Union.

“We do not have enough tests so we do not know the realistic data,” said Balazs Rekassy, a former manager of a state health clinic who advises the Budapest mayor, an opponent of Mr. Orban, on medical matters.

New restrictions on journalism that the government deems fake and harmful to the coronavirus response have made it harder to research the scale of the pandemic in Hungary. Many doctors are now reluctant to speak out publicly about specific problems, individual hospitals have been barred from releasing information, and journalists are warier of publishing it.

But beneath the veil of silence, there are indications that the situation may be graver than records show.

The coronavirus may have begun to spread through the Hungarian population nearly a month ago, in a process technically known as community transmission, according to a secret readout written by a foreign diplomat who had been briefed in early March by the country director for the World Health Organization, Dr. Ledia Lazeri. The readout was later obtained by The New York Times.

Dr. Muller, the chief medical officer, said on Friday that Hungary was still in the cluster-spreading phase. She hinted that the country was on the threshold of community transmission.

But according to the diplomat’s secret readout, the W.H.O. privately believed that community transmission had begun by the second week of March, since the disease’s first known victims in Hungary moved freely through the country before being diagnosed and one even left for Serbia.

The main facility used for testing at that time, St. Laszlo Hospital in Budapest, was also helping to spread the disease rather than contain it, because infected people were unwittingly mingling there with those yet to catch the disease, the readout stated.

The W.H.O. also concluded that the Hungarian government’s data was unreliable, since so few people were being tested, the readout said.

Asked to comment on the readout, Dr. Lazeri denied making these assessments. An independent epidemiologist currently advising the government, Gergely Roth, also said the country had not yet entered the community transmission phase, and said the term had a contested definition.

But diplomats from other missions said they had heard troubling information from a W.H.O. official.

As of Sunday, only 34 people are reported to have died from the virus in Hungary, but doctors worry that some deaths may have been attributed to other causes. A 99-year-old woman who died on March 11th in Budapest was reported to have died of pneumonia, even though her daughter, who visited her regularly and fell ill with similar symptoms at the same time, later tested positive for the virus.

The government has also quietly closed parts of the St. Imre Hospital in Budapest, after the disease spread among staff, two senior state doctors said on condition of anonymity. The hospital declined to comment, referring reporters to a government spokesman, who did not reply to two requests.

Some critics said the government had been slow to use the test facilities they already had at their disposal. Officials did not start testing at laboratories at the Semmelweis Medical School, which alone has the capacity to process at least 400 tests per day, until mid-March.

“Hungary did not respond in time,” said Andras Falus, a professor emeritus at the school.

But other physicians praised the government for doing a good job in tough circumstances, at a time of profound economic upheaval in which no country has tested enough people, let alone perfected its response to the pandemic.

“I do not see right now, for the time being, that there is a big turd in the crepe,” said Gabor Zacher, an emergency doctor with the Hungarian ambulance service. Dr. Zacher has criticized the government’s health measures in the past, but praised its recent social distancing measures.

Hungary implemented social distancing measures earlier than several other European countries, said Gergely Rost, an epidemiologist whom the government recently enlisted to advise Mr. Orban on the likely spread of the virus.

“As a consequence, we still don’t have too many,” said Dr. Rost, a lecturer at the University of Szeged, a college in southeastern Hungary. “At the moment, the epidemic is pretty much suppressed.”

Because of a lack of tests, the real number of cases is likely to be up to nine times higher than the current tally of infections, Dr. Rost said. But “numbers are underestimated in every country, even those who have tested more.”

For some, the problems with Mr. Orban’s response to the pandemic stem less from his actions since the start of the crisis, and more from his systemic neglect of Hungarian health care since re-entering office in 2010.

Under Mr. Orban, his government’s health care budget dropped as a proportion of national economic output, even as state spending rose in other sectors. He also abolished the Health Ministry, assigning its responsibilities to a larger department.

Around 10 percent of Hungarian doctors left the country in the first seven years of Mr. Orban’s current tenure in search of better-paid work, senior doctors estimated. The salary of a Hungarian general practitioner, as a proportion of the average national wage, is one of the lowest in Europe.

Under Mr. Orban, the cancer death rate rose and is tied for the worst in the European Union. Even before the coronavirus outbreak, the government refused to disclose the number of infections contracted in state hospitals for fear of alarming the public.

In the context of the coronavirus, his government’s most unhelpful action was the dismantling in 2017 of a state-run health authority that included a dedicated team of epidemiologists. Following the authority’s closure, these experts on pandemics either left government or were dispersed to other parts of the health system, undermining the government’s ability to react to a disease like the coronavirus.

“The extremely well-functioning pandemic defense network was weakened in recent years,” says Erzsebet Pusztai, a health care expert. “The previous unified organization was taken apart and distributed under government offices, and many experts left. And this serious pandemic found it in a very weakened condition.”

Years of low funding have left health facilities under-resourced, and contributed to a recent row about whether the government or health care workers should pay for their masks and visors.

“Health care workers are going unarmed into battle — we hardly have any protective masks,” said Dr. Peter Lehoczky, the director of outpatient care in a district of Budapest. “The feeling is that we are trying to shoot down a rocket with a slingshot.”

Benjamin Novak reported from Budapest and Patrick Kingsley from Berlin.