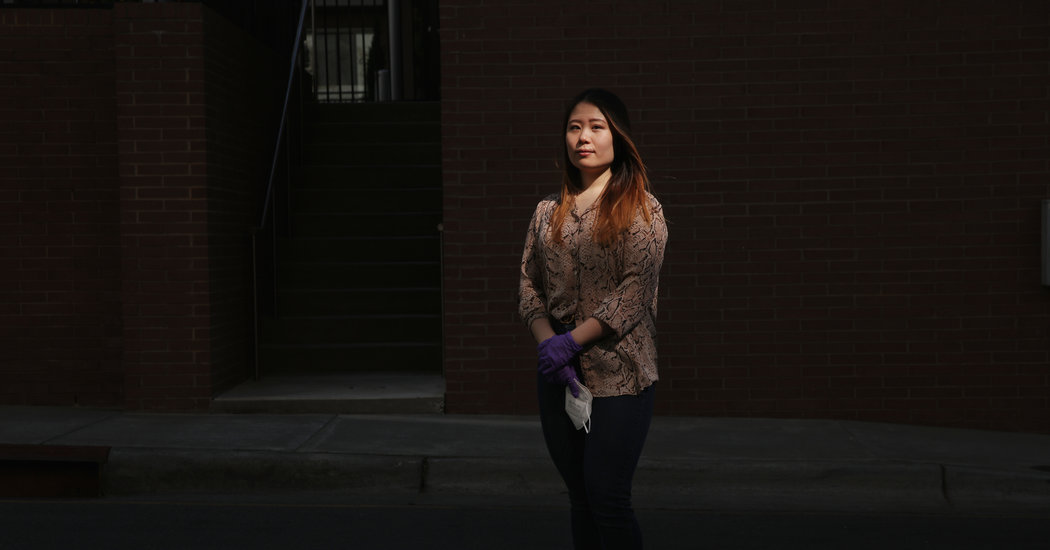 One student fantasized about buying a $30,000 seat on a private jet. One mother, frustrated with her inability to bring her daughter home, sent masks instead. One group of desperate parents made an unusually public appeal to the Chinese government for help.

The coronavirus outbreak has stranded more than one million Chinese students in empty dormitories and fearful towns and cities around the world. Many of those overseas students want to flee back to China, where official numbers suggest that the authorities have made progress in containing the pandemic. Fear, politics and the competing priorities of the Chinese government stand in the way.

Virtually all flights to and from China have been canceled as Beijing tries to keep infected travelers from reigniting the contagion there. Remaining seats are breathtakingly expensive. For students trapped in the United States, their families worry that tense relations between Beijing and Washington will hinder Chinese-run evacuation efforts.

The fears led one group of parents to publicly petition the Chinese government, a risky move in a country that increasingly tries to keep a lid on dissent. In an open letter posted online and addressed to the Chinese ambassador to the United States, the parents of 200 students in the New York area carefully praised the Chinese government’s support for its citizens overseas. Then it cited the “Wolf Warrior” series of films, huge hits in China, in which patriotic soldiers from the People’s Liberation Army protect Chinese people from overseas threats.

“We have always firmly believed that a Chinese passport can take you to more places, and in an emergency, can take you home,” they wrote.

The stranded students have put Beijing in a bind. It is anxious to tame the coronavirus outbreak that raged through the country before it spread abroad, putting its economy in free fall. Bringing in people from abroad, the government believes, invites further spread.

Yet China’s image is at stake. Beijing has portrayed itself as an increasingly powerful force on the global stage economically, politically and militarily. It has vowed to protect its people around the world.

Moreover, the students and their parents comprise an important constituency for the Communist Party. Many are upper middle class, if not wealthy. Foreign students could become virtual ambassadors for China as they rise in the ranks of business, politics or academia.

“International students are generally the group most concerned about the motherland among overseas Chinese,” Gao Cheng, a researcher at the Chinese Academy of Social Sciences, wrote in a social media post.

“They are also the most vulnerable group to the impact of the epidemic and possible wave of anti-China sentiment. They still need to have confidence in the country.”

The Chinese government has rushed to portray itself as helping out. In a series of public addresses over the past week, officials emphasized the role that Chinese embassies around the world have played in reaching out to students. They posted pictures of the health kits they sent to students that, as one official put it, will allow students to “feel the warmth and love from the motherland.”

China has also publicized its efforts to rescue 1,457 students stranded in countries like Bangladesh, Cambodia, Ethiopia, Iran and Italy. On Thursday, a flight arrived in London to evacuate 180 Chinese students from Britain.

The government “attaches great importance to and cares deeply about Chinese students abroad, and has taken major measures to protect their safety and health,” said Hua Chunying, a spokeswoman for the Chinese Ministry of Foreign Affairs, on March 31. “They are children of the motherland and the future of our country.”

Getting them home will be difficult, however.

One travel agency told Penny Pei, a 23-year-old graduate student of sensory science at North Carolina State University in Raleigh, that it could get her from Chicago to Shanghai for $10,000. Three days later, after the Chinese government slashed international flights even further, the price went up to $16,000.

“I don’t want to pay for that nonsense,” said Ms. Pei, who in a moment of frustration took a screenshot of an ad she saw offering a $30,000 seat on a private jet. Now her frantic parents pester her constantly about if she is eating enough and whether she is lonely. (Yes to both.)

“I really appreciate their concern,” she said, “but it gets a bit much.”

On Saturday, after two of her tickets were canceled and fearing additional travel restrictions in May, she paid a travel agency $12,000 for an economy class ticket from Chicago to Xiamen in mid-April.

“I’m still a little suspicious if I would eventually get to go back home because a lot can happen within these 10 days,” Ms. Pei said.

About 1.6 million Chinese students were studying abroad when the coronavirus struck, and 1.4 million of them are still there, according to official figures. The largest single group of students was in the United States, it said, totaling about 400,000.

Parents in China have watched in growing despair as infections and deaths have mounted in the United States — and as the Chinese government has taken steps to keep the outbreak from returning. After the government cut international flights, only 108 were scheduled to arrive last week in China from overseas, according to the Chinese Civil Aviation Administration, or about 1 percent of the total in better times.

Rainey Jin, a 20 year-old undergraduate at New York University, made it out of the United States just in time. She flew to Taiwan via Hong Kong on her way back to the mainland. When she landed in Taipei on March 22, she learned that she was on one of the last flights before Taiwan banned all transit passengers. Family members inundated her with text messages, worrying about her travel and reminding her to keep her mask on at all times.

“We are so young, but we have to face the difficulty ourselves because our family is not around us,” said Ms. Jin, who was on her third-to-last day of government-mandated quarantine in the Chinese city of Hangzhou on Friday. “We have to figure out how to get back home, or we have to decide ourselves if we have to stay or come back.”

Some parents, like the letter writers to the Chinese ambassador to the United States, have called for the government to allow evacuation flights, a politically difficult take. Evacuations require close coordination with foreign governments that have their own travel restrictions in place.

It is not clear whether Chinese and U.S. officials have discussed evacuation flights.

“I’m not aware that we are tracking Chinese students in the United States who are seeking assistance inasmuch as we are seeking to repatriate U.S. citizens from overseas,” said Ian Brownlee, principal deputy assistant secretary in the Bureau of Consular Affairs at the State Department.

For many people in China, the images from New York and other American cities look like a replay of Wuhan, the Chinese city where outbreak emerged. Their children, they fear, will be set adrift.

“They are not citizens,” said Zhengmei Sun, whose daughter, Jacquelyn Yang, 19, attends New York University “They don’t have good health insurance. They don’t have any connections in society, only each other and the consulate.”

Ms. Sun, 48, spent days and nights in her apartment in the Chinese city of Shenzhen looking for flights for Ms. Yang. Ms. Sun bought seven tickets with alternative routes as countries began to close borders. One early morning, as she found out that Canada and then Hong Kong would soon block nonresidents, she pounced on a $400 ticket to Hong Kong scheduled to depart hours later.

Ms. Yang rushed to John F. Kennedy International Airport with gloves, alcohol sprays and a mask — and made her flight. On Thursday, after Ms. Yang completed two weeks of quarantine, they celebrated Ms. Yang’s 19th birthday at a Shenzhen restaurant. While the government has showed sympathy, public attitudes in China have been less understanding. Online, many have reacted harshly to articles and videos about rich, young Chinese people taking private jets or complaining about their circumstances.

Zhaojing Qian probably would not be among them. The 22-year-old graduate student at Stony Brook University in New York said she worried about getting on a plane with others who might get infected. She also said that she understood the Chinese government’s worries about a worsening outbreak.

“China just overcame the coronavirus outbreak back there,” she said. “I know that the students going back is a big risk for them, and the American government has to focus on their citizens.”

University life has become lonely for Ms. Qian. Her roommate left for China a few days ago. But the emergency has created an unexpected bridge with her mother. Ms. Qian has attended boarding schools since she was 12, but her mother’s worries have brought new life to the relationship. In messages, Ms. Qian reassured her mother that she was eating properly, sending her photographs of her stocked fridge, home-cooked meals and cut fruit.

Frustrated that she couldn’t bring Ms. Qian home, her mother sent her a package for the first time: A packet of masks.

“I’m going to cherish it,” she said. “I feel some love from her now. Before that, I thought I was just a kid in her life. Now I can feel that she cares for me.”