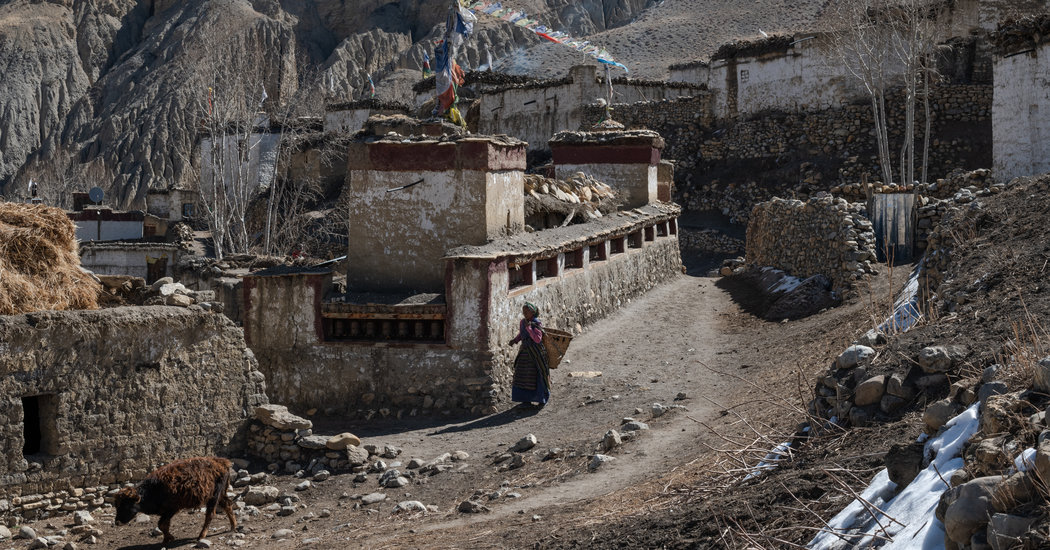 DHYE, Nepal — High in the Himalayas, on a rugged plateau dotted with empty mud huts, an exodus has begun.

In the village of Dhye, crops are stubby, dead stalks. Water is scarce. The only school closed a few years ago. With dwindling food, most families have packed their belongings and left, driven out by a faceless, man-made enemy.

They are Nepal’s climate-change migrants, and there will be more.

“I love this village,” said Sonam Chhiring Gurung, 76, one of the final holdouts, “but I can’t survive here much longer.”

Climate change is remaking the Himalayan region, putting at risk millions of South Asians who depend on its water resources and pushing mountain dwellers in northern Nepal, home to the world’s highest peaks, to build new settlements at lower altitudes.

Around the world, tens of millions of people have already been displaced as a result of a warming planet. Researchers estimate that the number of climate-change migrants — those fleeing natural disasters, droughts or other calamities — could reach a billion by the end of the century.

South Asians are among the most vulnerable. Last year, after an unusually weak monsoon, water nearly ran out in Chennai, one of India’s biggest cities. In Bangladesh, up to 18 million people face displacement by 2050 from sea rise alone, according to the Environmental Justice Foundation. Extreme heat is making people sicker and poorer, and could sharply diminish the living standards of 800 million people in the region if goals for mitigating climate change are not met.

Warmer Himalayas could have disastrous consequences for the subcontinent.

Last year, in one of the most complete studies on mountain warming, scientists warned that even if the world’s most ambitious climate change targets were met, at least one-third of Himalayan glaciers would melt by the end of the century.

If global warming and greenhouse gas emissions continue at their current rates, the region could lose two-thirds of its glaciers by 2100, according to the report, the Hindu Kush Himalaya Assessment.

“In the long term, the impacts will be profound for hundreds of millions of people in the plains,” said David Molden, the director general of the International Centre for Integrated Mountain Development in Kathmandu. “If we overlay significantly changed rain and river flow patterns, it will be a mess for people depending on Asia’s big rivers for irrigation and drinking water.”

In a country where nearly 70 percent of people work in agriculture, an acceleration in extreme weather may “reverse and undermine decades of development gains and potentially undermine all our efforts to eradicate poverty,” said Ayshanie Medagangoda-Labé, the United Nations Development Program’s representative for Nepal.

“Nepal is ground zero for the impacts of climate change,” she said. “As a country with one of the most fragile ecosystems — the Himalayas — and an economy that is heavily reliant on favorable climate conditions, Nepal is probably one of the most exposed.”

Glimpses of a warmer future are everywhere.

In 2016, Nepal’s army drained a lake near Mount Everest after rapid glacial melting threatened to cause a catastrophic flood downstream. A study released last year found that the size of ponds on top of glaciers in the region — which can both signal melting and accelerate it — had rapidly increased over the past three years, far outpacing the rate of change from the first decade and a half of the 2000s.

The number of climate change migrants in Nepal’s Himalayas is unknown, though local officials in mountain towns estimate it to be in the thousands. Min Bahadur Shahi, a member of the government’s commission for development work, said officials planned to track the impact of warming temperatures for the first time through coming census questions.

“Our first priority should be helping those displaced from the climate crisis,” he said.

Take the case of Dhye, in the remote Mustang region of Nepal, about 12,000 feet above sea level.

More than a decade ago, the village’s families gathered for a meeting to ponder a heavy question: Should they stay?

They looked around their landscape, a brown, dehydrated expanse that could barely sustain barley anymore. They weighed soil degradation, newly erratic rainfall and fears of starvation against centuries of lived history — the huts they had built with their hands, the pockets of earth where parents had buried each newborn’s umbilical cord.

“I couldn’t stay,” said Tsering Lamke Gurung, 54, a village leader and father of eight, four of whom have died. “My children and I were not able to survive from crop failure.”

The leavers have trickled out of Dhye in groups over the past few years. They strapped bundles of food and clothing to their backs and hiked nearly a mile down to the banks of a still-flowing stream. They called their new community Dhye Khola, a local name for the water body.

There were some moments of triumph. One resident sent pictures of the uncultivated land to a French aid agency, which agreed to plant fruit trees in the village and help build sturdier concrete homes for families.

But the longer-term settlement process was fraught, illustrating the challenges migrants face in procuring resources for unrecognized villages where residents have no legal right to the land.

Mr. Gurung, who took the lead in building Dhye Khola, said he approached a former prime minister of Nepal for guidance and aid. He met prominent lawmakers, a Nepal-based leader of the World Wildlife Fund and representatives from foreign embassies.

“They didn’t support us,” Mr. Gurung said. “They wouldn’t help us get a land ownership certificate.”

When a government conservation group backed away from its promise of providing apple seedlings for Dhye Khola, Mr. Gurung said he marched into its office and threatened to burn it down. He said the group eventually relented and sent about 275 seedlings.

“To those who say climate change is fake and criticize us for occupying public land, I ask them to come visit our village,” Mr. Gurung said. “I am a victim of climate change.”

Some wondered how long it would take before their next move, pointing out that broader warming trends were impossible to escape.

To protect against flooding during the summer monsoon, residents of Dhye Khola have started building embankments near the stream. They strategized about what to do if their apple orchards were marauded by locals from other struggling villages.

Tsering Bitik Gurung, 52, a farm laborer with a sun-creased face, said the stress was getting to her.

Ms. Gurung, who is not related to Tsering Lamke Gurung, agonized over the recent death of her husband from cancer and her diminishing money. The well near her home has gone dry. She cursed local police officers who prevented her from selling wild herbs in one of the bigger cities — retribution, she said, for villagers’ persistent efforts to get Dhye Khola recognized.

Sitting next to her stove, Ms. Gurung sighed. The apple orchards are bountiful for now, she said, but “our future is dark.”

“We came here after hardship, not for fun,” she said. “I pray that God will save us.”