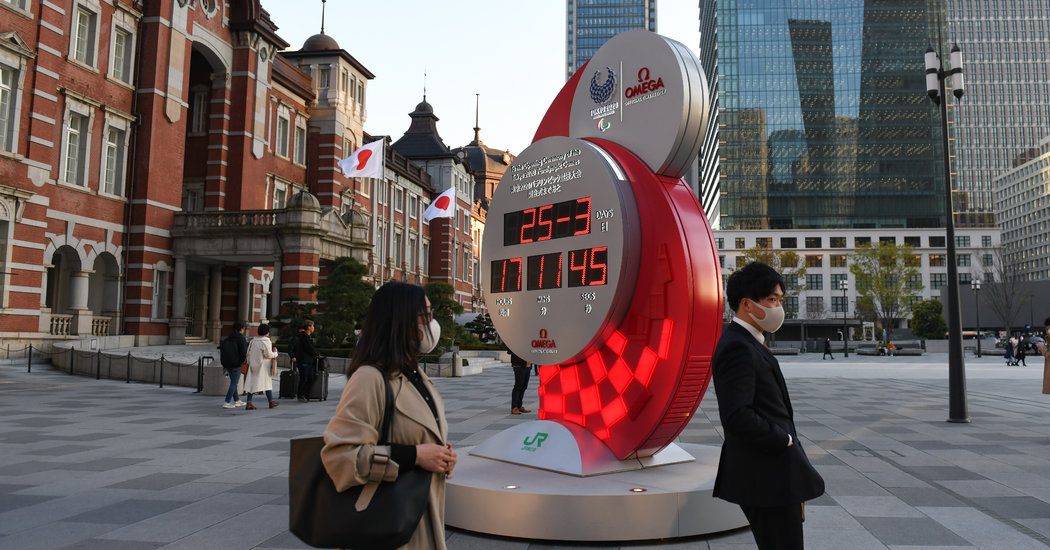 Wallace Spearmon, a two-time Olympian in track and field, got what he wanted when the International Olympic Committee finally bowed to pressure from athletes and national Olympic organizations and postponed the 2020 Tokyo Games for a year.

It made sense given the coronavirus pandemic. But the financial ripple effect might jeopardize his ability — and that of thousands of other American athletes — to train for the Games.

“Hopefully the athletes don’t feel this, though we know we probably will,” said Spearmon, who is training in Arkansas to compete in the 200 or 400 meters. “A lot of us are already struggling to get by.”

The anxiety is growing because the postponement has left the United States Olympic & Paralympic Committee with a $200 million cash crunch that could leave athletes without the modest living and training stipends they rely on. The deficit comes while the committee simultaneously makes a push for the 2021 Summer Games and the 2022 Winter Games in Beijing.

The organizations that run the individual Olympic sports in the United States, known as national governing bodies, were already trying to figure out how they will manage without income they were set to receive from thousands of events that have been canceled because of the pandemic.

In recent days, U.S.A. Cycling laid off or furloughed 40 percent of what had been a 70-person staff. U.S. Rowing cut its staff by a third, also through a mix of furloughs and layoffs, and cut pay for much of the staff that remained.

The looming crisis is a result of the U.S.O.P.C.’s unique financial structure, which relies so heavily on nearly $200 million it receives every other year from its share of the U.S. media rights fees that NBCUniversal pays the I.O.C. to televise the Olympics.

Unlike other national Olympic organizations, the U.S.O.P.C. receives no government funds. It pays for its operations and helps fund athletes and the national governing bodies of its sports through the sale of media and sponsorship rights and some modest fund-raising.

The problem for the U.S.O.P.C. is that it does not get its share of the NBCUniversal money until after the Games occur. That money represents about 40 percent of the U.S.O.P.C.’s budget and allows it to distribute annually about $100 million, including $13 million in stipends directly to athletes and more than $75 million to the national governing bodies for their sports.

For example, in 2016, U.S.A. Cycling received $2 million from the national committee, according to U.S.O.P.C. tax filings. The U.S. Fencing Association received $900,000. U.S.A. Gymnastics received $3 million. And even though the 2018 Winter Olympics were still more than a year away at the time, U.S. Figure Skating received $1 million, U.S.A. Curling got $842,000 and the U.S. Bobsled and Skeleton Federation received more than $2 million.

Some of the organizations received more the following year.

Also, direct payments for the athletes totaled $13 million each year as well, funding that helps roughly 2,000 athletes pay their rent and eat, using stipends that range from a few thousand dollars to as much as $21,000.

There is also a discretionary fund of about $1 million to target a team or a group of athletes for whom a little extra support might make the difference between sixth place and a medal.

Max Cobb, who leads the U.S. Biathlon Association and is the chairman of the council for the national sports organizations, said all of the projects the U.S.O.P.C. funds for athletes at the elite level and the grass roots now need to be reassessed and possibly put off for a year.

In a statement Thursday, Morane Kerek, the U.S.O.P.C.’s, chief financial officer, said the organization is still evaluating the financial impact of the cancellation of the Games.

“Given the uncertainty of the virus and its impact on the sports landscape we expect our analysis will continue to evolve over the coming weeks,” Kerek said.

The U.S.O.P.C. could try to tap the United States Olympic Endowment, created in 1984 after the Los Angeles Games, to finance Olympic sports. The endowment has net assets of $185 million, according to its last financial report, but the U.S.O.P.C. tries to limit how much it asks to withdraw from the endowment, which is run independently, in any one year.

What happens to the U.S.O.P.C.’s finances during the next 18 months may hinge on a delicate series of negotiations between the I.O.C. and NBCUniversal. In a conference call Thursday, Timo Lumme, the director of television and marketing services for the I.O.C., said his organization is speaking to broadcasters to try to avoid leaving national Olympic committees and athletes without the funds they need.

However, NBCUniversal is not obligated to make the bulk of its payment to the I.O.C. — roughly $1.2 billion — until shortly before the Olympics start. By that time, the network has finally received a steady stream of funds from advertisers.

A spokesman for NBC Sports said Thursday that executives are “in constant communication with our partners at the I.O.C.,” but he declined to comment on any specific conversations.

While those talks take shape, athletes and the people in charge of getting them the money they need are dealing with life in limbo.

DeMartini, the U.S.A. Cycling chief executive, said the organization receives roughly one-third of its money from the U.S.O.P.C., one-third from fund-raising and one-third from current racing. U.S.A. Cycling has received its U.S.O.P.C. money for this year but all riding in the country has stopped. Next year, riding will likely return but the Olympic money remains up in the air.

Susan Smith, the interim chief executive of U.S. Rowing, said her organization has applied for a low-interest loan through the Small Business Administration and reached out to donors for help covering the shortfalls that the cancellation of rowing’s busiest season of events has already produced.

“It’s an interesting thing how a pandemic can focus an organization,” Smith said.

Spearmon said athletes are already feeling the financial crunch, and if the U.S.O.P.C. has to dial back its funding that will only to make it worse. He is finally healthy from a calf injury two years ago, but there are no competitions where he can collect prize money or reach the standards that would requalify him for funding from the U.S.O.P.C. or the U.S.A. Track and Field. He doesn’t have a sponsor, and social distancing advisories prevent him from coaching.

For those athletes who do have sponsorships, many of them have to renegotiate with shoe companies in December. That was supposed to be the end of an Olympic year, not the beginning of one. And it will be a bad time for companies dealing with the fallout from what economists predict will be a deep recession.

“They are expressing how much money they have lost in last few months,” Spearmon said of the shoe companies. “There is so much unknown right now financially.”