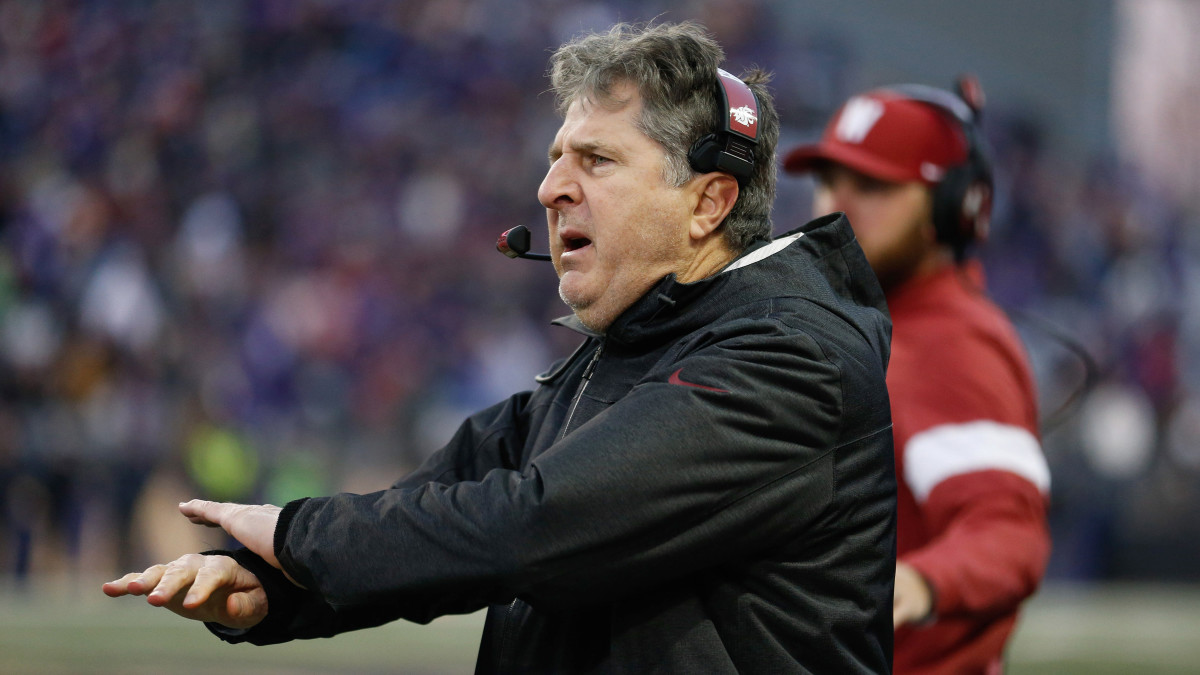 On Wednesday night, Mississippi State head coach Mike Leach tweeted a meme depicting a woman knitting a noose: “After 2 weeks of quarantine with her husband, Gertrude decided to knit him a scarf..”

On Thursday, Leach apologized for the tweet, saying, “I sincerely regret if my choice of images in my tweets were found offensive. I had no intention of offending anyone.” He appeared to offend his own players, including Erroll Thompson, Fabien Lovett and Kobe Jones.

And on Friday, Lovett announced his intention to transfer from Mississippi State. Lovett didn’t elaborate on his decision and didn’t say if Leach’s tweet prompted it.

I started with a list of 51 hires, locked in national championship coaches (that’s why Gene Chizik made the list) and filled in the rest. The top three—Saban, Swinney, and Carroll—seemed obvious but the rest were challenging. Disagree? Tweet at me.

This story got lost in the shuffle last week: On Monday, Tarleton State hired Billy Gillispie as head coach as the program transitions to Division I as a WAC member.

“Coach Gillispie has shown to truly be genuine in the way he cares about helping student-athletes achieve great success both on and off the court,” school president James Hurley said in a statement. “After a national search and an extensive interview process, we are confident that Coach Gillispie’s experience and commitment to Tarleton and our community make him the right person to build on the storied success of Texan basketball.”

“He had his team practicing for four hours a day — including one day where they went for eight hours — just obliterating the NCAA’s limit of 20 hours per week. It left one player on the team with stress fractures in both legs that he was forced to play through. He lied to players about scholarship offers, stringing them along until he had someone better to give the scholarship to. He did the same thing with coaches trying to get a spot on his coaching staff. According to [Jeff] Goodman’s reporting at the time, former Indiana guard Tom Coverdale quit his job as a Junior College coach to be an assistant on Gillispie’s staff only to get to Lubbock and be told that he was going to be an assistant strength coach that paid half as much. He would force everyone with the program—including radio and TV broadcasters—participate in layup lines at the start of practice. Anyone that missed a shot [had] to run the stadium stairs.”

Marquette and Long Beach State have more first-round NFL Draft picks than Iowa State … You can watch tons of HBO shows for free during quarantine … The best men’s Final Four games of all time … SI’s NFL Mock Draft 12.0: Dolphins, Bucs and Eagles trade up … And Todd McShay’s new 2-round mock draft … Antonio Brown is formally charged in alleged assault of driver in Florida … The most likely Hall of Famer on every current NBA roster … The NBA is “angling” toward canceling the remainder of 2019-20 season … Baseball might try to play in an empty spring training ballpark.

Can’t get this out of my head