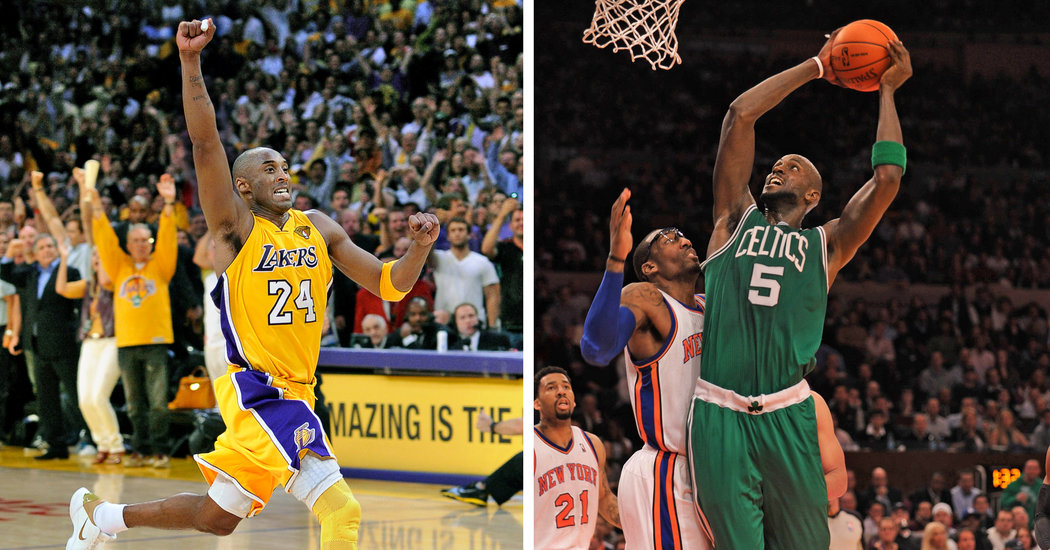 Kobe Bryant leads one of the most highly anticipated player classes ever for the Naismith Memorial Basketball Hall of Fame alongside three other superstars from the N.B.A. and W.N.B.A. who defined the sport over the first two decades of this century.

Bryant, the former Los Angeles Lakers star who died on Jan. 26 in a helicopter crash at 41 years old, was chosen for induction with two N.B.A. greats who repeatedly faced off against him in the playoffs as his career blossomed: Tim Duncan and Kevin Garnett. The three N.B.A. All-Stars helped shaped one another’s legacies and were among the signature faces of the league as it transitioned out of the Michael Jordan era.

They will be joined in the Basketball Hall of Fame by Tamika Catchings, who was named rookie of the year in 2002 with the Indiana Fever and never looked back, becoming one of the best players in W.N.B.A. history over 15 seasons.

Each of the three N.B.A. inductees transformed the landscape of basketball in his own way.

Bryant became the biggest international basketball star in the world because he had business savvy and was a winner who mimicked Jordan’s game more so than anyone else ever has, making him Jordan’s heir apparent for much of his career.

In a small way, it was Garnett who paved the way for Bryant’s entry into the league in 1996. The year before Bryant’s rookie season, Garnett became the first N.B.A. player drafted out of high school in two decades in a move that was heavily questioned at the time. But Garnett, a lanky and ferocious 19-year-old, made an immediate impact and would go on to become one of the most gifted big men in N.B.A. history.

Bryant and Garnett were the two greatest players in the league to have been drafted straight from high school before LeBron James came along in 2003. After 12 years of limited postseason success with the Minnesota Timberwolves, Garnett was traded to the Boston Celtics, where he helped the franchise revitalize and win its first championship in more than two decades.

Then there was Duncan, who was never as flashy as Bryant and Garnett but no doubt had just as much impact. He embodied the San Antonio Spurs’ organizational ethos of stability with his stoic demeanor and consistency year in and year out, resulting in five championships, the same number as Bryant.

During an era when big men who lived in the paint still reigned supreme, Duncan and Garnett were relentlessly compared to each other, in particular because they were both exceptional defensive players competing in the Western Conference. Duncan won two Most Valuable Player Awards, while Garnett and Bryant each won one.

She is among the career leaders in several categories for the W.N.B.A., including points (third), assists (eighth), rebounds (third) and steals (first). She is known as one of the best defensive players in league history and is a five-time Defensive Player of the Year Award winner.

Also selected for induction were the coaches Eddie Sutton, who was the head of Oklahoma State’s men’s team from 1991 to 2006; Kim Mulkey, who has led Baylor’s women’s team to three championships; and Rudy Tomjanovich, who coached the Houston Rockets to two championships in the 1990s. Patrick Baumann, a longtime FIBA executive, also was chosen as a contributor by the Hall of Fame’s international committee.