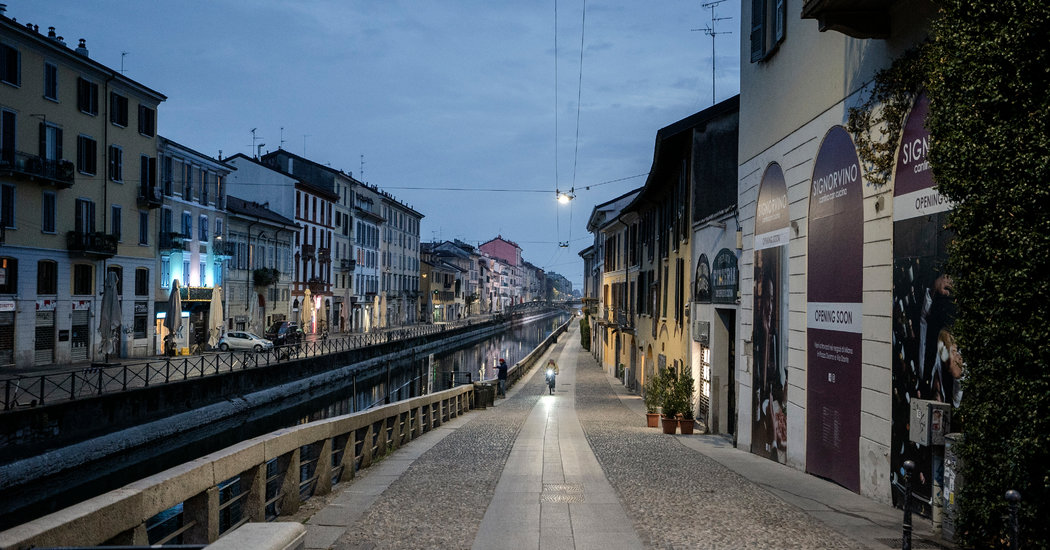 ROME — There is a growing sense in Italy that the worst may have passed. The weeks of locking down the country, center of the world’s deadliest coronavirus outbreak, may be starting to pay off, as officials announced this week that the numbers of new infections had plateaued.

That glimmer of hope has turned the conversation to the daunting challenge of when and how to reopen without setting off another cataclysmic wave of contagion. To do so, Italian health officials and some politicians have focused on an idea that might once have been relegated to the realm of dystopian novels and science fiction films.

Having the right antibodies to the virus in one’s blood — a potential marker of immunity — may soon determine who gets to work and who does not, who is locked down and who is free.

That debate is in some ways ahead of the science. Researchers are uncertain, if hopeful, that antibodies in fact indicate immunity. But that has not stopped politicians from grasping at the idea as they come under increasing pressure to open economies and avoid inducing a widespread economic depression.

The conservative president of the northeastern Veneto region has proposed a special “license” for Italians who possess antibodies that show they have had, and beaten, the virus. The former prime minister, Matteo Renzi, a liberal, has spoken about a “Covid Pass” for the uninfected. Prime Minister Giuseppe Conte said that while the lockdown remained in place, the government had begun working with scientists to determine how to send people who have recuperated back to work.

With its echoes of a “Brave New World,” the debate about how to reopen arrived in earnest this week in Italy. Like the virus’s crushing toll — some 14,681 dead in Italy as of Friday evening — the shift is ahead of countries like Spain, Britain and the United States, where the contagion is still on an upswing.

Italy was the first European country to announce a nationwide lockdown, which it began on March 9. But the rate of new infections slowed this week — on Friday, there were about 4,500 new cases, less than in recent weeks — leading officials and first responders alike to talk with guarded optimism.

“We are beginning to see the light at the end of the tunnel,” said Fabio Arrighini, a supervisor of an ambulance hotline in the Lombardy town of Brescia, which has one of the highest death rates in Italy. “The calls have gone down.”

But the debate over an antibody-based work force has once again placed Italy at the unfortunate vanguard of Western democracies grappling with the virus, its uncomfortable ethical choices and inevitable aftermath. Such questions have already been raised by the wrenching decisions of doctors to treat the young, with a better chance of life, before the old and sick.

But at some stage, nearly all governments will have to strike a balance between ensuring public safety and getting their countries running again. They may also find themselves weighing what is best for society against individual rights, using biological criteria in ways that almost certainly would be rejected absent the current emergency.

“It looks like it splits humanity into two, the strong and the weak,” said Michela Marzano, a professor of moral philosophy at the Paris Descartes University. “But this is actually the case.”

From an ethical perspective, she argued, the question of using antibodies as a basis for free movement reconciles a utilitarian vision of what is best for society with respect for individual humanity, by protecting “the most fragile, not marginalizing them.”

Scientists in Italy, like their counterparts in Germany, the United States, China and beyond, are already studying whether antibodies are a potential source of protection or immunity from the virus.

China has slowly reopened its economy, focusing on preventing another wave of infection arriving from overseas. In New York, Gov. Andrew M. Cuomo has envisioned a strategy in which younger people, and people who have antibodies showing they have been cured of the virus, can go back to work.

The British government has floated the idea of “immunity passports,” though it is still struggling to complete even swab tests for an accurate snapshot of current infection levels, and the virus has not been present long enough in the British population to provide enough antibody data.

Italy, by dint of its early and widespread exposure to the virus, has an opportunity to gain insight into how the virus works and the biological properties that protect against it.

Next week, Veneto plans to begin collecting 100,000 blood samples from people across the region — first from thousands of health care workers and then public employees — to study in labs the antibodies of people who have the virus and those who have healed from it.

Nowhere in Italy is the pursuit of the antibody strategy more intense than in Veneto. With its wealth of resources, high-profile consultants and biotech presence, it may now be uniquely positioned to influence the global conversation and provide insights for the rest of the world.

The region sits adjacent to the hard-hit Lombardy region, and one of its towns, Vo’, had Italy’s first fatality from the virus and was one of the first towns in the country to be quarantined.

Vo’ also has a relatively homogeneous genetic pool, which may facilitate research, and it has been widely tested. After the outbreak, officials there took the extraordinary step of swab-testing the entire population of 3,000, including people without symptoms.

That helped eliminate an outbreak, and now officials plan to carry out antibody testing and genome sequencing on the entire population to detect patterns in who was and was not susceptible to the virus.

Those results, expected in three or four months, perhaps could shed light on why some remained asymptomatic while others got sick, whether those who didn’t get infected already had antibodies and whether children had something that helped them avoid sickness.

“Italy has at the moment, of course, one of the largest pools of infected people that have recovered from the infection,” said Andrea Crisanti, the top scientific consultant on the virus in Veneto and a professor of microbiology at the University of Padua. He added that it was “a unique and valuable set of information and data.”

Dr. Crisanti emphasized the need for a carefully designed strategy to unlock Italy that would make use of contact tracing, protective gear and aggressive testing of post-virus antibodies.

“The planning ahead is one of the most important things,” Dr. Crisanti said. “Because it’s easy to lock down.” Without a proper strategy for the path ahead, “the most likely outcome is that the epidemic starts again.”

When only the second antibody is detected, it means the person is probably no longer infected.

“You are most likely a healthy person that either survived the infection or you were asymptomatic and you have developed antibodies,” Dr. Crisanti said.

In Veneto, the regional president, Luca Zaia, has expressed concern about a single case of “a person who got better and got reinfected,” but he and his consultants appear confident about the potential of antibodies.

The antibodies in healed Italians could be a valuable tool in determining who could safely exit quarantine to work, Dr. Crisanti said. The key to lifting the lockdown would be limiting the probability of contagion and transmission, he said, since the force of the virus itself remained constant.

He argued that the small town of Vo’ presented ideal conditions for antibody and genome testing.

“The good thing about Vo’ is that this is a community that has been in place for several hundreds of years and with probably very little mixing,” he said, giving a clearer genetic picture.

Giuliano Martini, the mayor of Vo’, said that he and the people in his town were grateful for the aggressive testing, which potentially saved hundreds of lives.

Once the central government in Rome lifted an initial quarantine on Vo’ in the beginning of March, Mr. Martini said, the comprehensive testing identified people who were infected but asymptomatic and kept them from spreading the disease.

Putting the town at the disposal of researchers looking to learn more about the virus and its antibodies is “the least we can do,” he said.

“We have to recognize this effort done for us by making ourselves available for future tests,” he said, adding that the town continued to be a gold standard in Italy for active surveillance, and that “we know the name and surname” of all the people left in quarantine.

For residents reluctant to take part in the new study, which he acknowledged was more intrusive as it was a blood test, he said, “We go see them in their homes and convince them.”

“There isn’t going to be any problem for this second test,” he said. “It’s an additional check on them, it can’t be anything but positive.”

But the outcomes may not be great news for individuals who, potentially under the law, will remain marginalized from society.

In Veneto, Mr. Zaia has proposed that Italians in possession of antibodies showing they no longer have the virus could obtain a “license” that allows them to move around the country and work.

Dr. Luisa Bracci Laudiero, an immunologist at the Italian National Research Council, said that the antibodies “should be protective, we all hope they are, but we don’t have the mathematical certainty.” She said researchers looked to China, which preceded Italy in the outbreak, for evidence of immunity.

But Italy was also further along in cases to research compared with the rest of the West.

“Here the illness has already been in full development for a month and a half,” she said, adding that this allowed researchers to track many patients over a long period of time to determine if immunity had developed.

“We find ourselves being a bit of a laboratory,” she said.