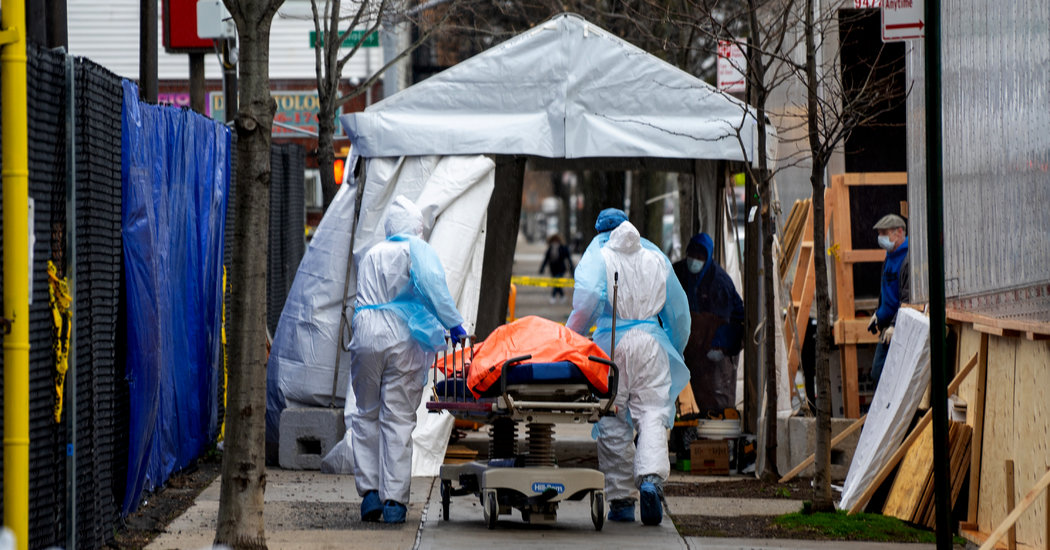 New York, the increasingly battered epicenter of the nation’s coronavirus outbreak, on Friday reported its highest number of deaths in a single day, prompting state officials to beg the rest of the United States for assistance and to enact an emergency order designed to stave off medical catastrophe.

In the 24 hours through 12 a.m. on Friday, 562 people — or one almost every two-and-a-half minutes — died from the virus in New York State, bringing the total death toll to nearly 3,000, double what it was only three days before. In the same period, 1,427 newly sickened patients poured into the hospitals — another one-day high — although the rate of increase in hospitalizations seemed to stabilize, suggesting that the extreme social-distancing measures put in place last month may have started working.

Despite the glimmer of hope, the new statistics were a stark reminder of the gale-force strength of the crisis that is threatening New York, where more than 102,000 people — nearly as many as in Italy and Spain, the hardest-hit European countries — have now tested positive for the virus. The situation, as it has been for weeks, was particularly dire in New York City, where some hospitals have reported running out of body bags and others have begun to plan for the unthinkable prospect of rationing care.

“It is hard to put fully into words what we are all grappling with as we navigate our way through this pandemic,” Vicki L. LoPachin, the chief medical officer of the Mount Sinai Health System, wrote in an email to the staff on Friday. “We are healing so many and comforting those we can’t save — one precious life at a time.”

Around the country, the total number of coronavirus cases spiked sharply as of Friday afternoon, exceeding 275,000, with more than 7,000 total deaths. After New York, New Jersey was the state with the highest rate of infection. Globally, more than one million people had been infected and nearly 60,000 had died.

“We continue to watch, in addition, the Chicago area, the Detroit area, and have developing concerns around Colorado, the District of Columbia,” Dr. Deborah Birx, the White House coronavirus response coordinator, said at a daily news briefing on Friday. She added that the government would “move supplies creatively around the country to meet the needs of both the front line health care providers but also every American who needs our support right now.”

As the inexorable march of contagion in New York continued, Gov. Andrew M. Cuomo issued an impassioned plea to the nation to hurry medical staff and equipment to the state before an expected shortfall of both overwhelmed its already groaning health care system, perhaps as early as next week.

Mr. Cuomo, vowing to return the favor, said he would redirect hundreds of lifesaving ventilators and teams of local doctors to other states as soon as the crisis in New York passed its peak.

But unable to count on reinforcements arriving fast enough, Mr. Cuomo also issued an extraordinary executive order on Friday giving him the power to commandeer ventilators from hospitals in less-affected counties in the state and to redeploy them to hard hit areas in Brooklyn, Queens and Long Island.

But Representative Elise Stefanik, a Republican congresswoman who represents a rural district of northern New York, said in a statement that she was “very concerned” about the order.

“I represent demographically the largest number of seniors of any district in New York,” she wrote. “This is the most vulnerable age group facing Covid-19 and needs to be considered.”

As the outbreak entered its second month, New York City in particular hunkered down for what promised to be a long and grueling siege.

Earlier in the week, city officials rushed 45 refrigerated trailers to overburdened hospitals where in-house morgues were filling up with bodies. Crematories, under eased restrictions, are now allowed to run around the clock. A special team of 42 military mortuary affairs officers was starting to arrive from Virginia to help the city’s medical examiner.

One out of every six police officers in the city had called out sick or was in quarantine, straining the department at the very moment when its 36,000 officers have been asked to enforce new rules intended to slow the spread of infection.

To cut back on crowding in emergency rooms, the city’s Fire Department issued new guidelines to thousands of paramedics, telling them not to bring cardiac patients to hospitals unless they were able to find a pulse.

Mayor Bill de Blasio has been warning that the city was only days away from what he called a “D-Day,” when the outbreak would overwhelm the health care system, putting hundreds, if not thousands, of additional people at risk. In an early morning television appearance on Friday, he made his own appeal to the country, asking for what amounted to a draft for medical personnel.

“Unless there is a national effort to enlist doctors, nurses, hospital workers of all kinds and get them where they are needed most in the country in time, I don’t see, honestly, how we’re going to have the professionals we need to get through this crisis,” Mr. de Blasio said.

As the weekend neared, the possibility emerged that the city could finally get relief from the U.S.N.S. Comfort, the Navy hospital ship that arrived in New York to great fanfare on Monday.

Pentagon officials had initially said the ship would treat only non-coronavirus patients in an effort to keep the vessel free from infection. But on Friday, Gen. Mark A. Milley, the chairman of the Joint Chiefs of Staff, said the military was “reassessing” its policy and might allow coronavirus patients aboard the ship.

General Milley’s comments came after New York hospital executives complained on Thursday that the Comfort was sitting at its berth in New York largely empty while hospitals in the city were overrun.

In one sign of the strain on hospitals, Lenox Hill Medical Center in Manhattan temporarily experienced a drop in pressure in its oxygen supply on Friday, according to a memo that hospital executives sent to staff members. The cause was apparently the heavy demand.

To bolster the local health care system, Mr. Cuomo this week enacted an unprecedented plan for all of New York’s hospitals — public and private, upstate and downstate — to work together in a kind of single network. By the end of the week, there were early signs that the effort was working.

“So far, we’ve been holding it together,” Dr. Chin said. “Are we ready for what’s coming? I can’t really say — because I don’t know what’s coming.”