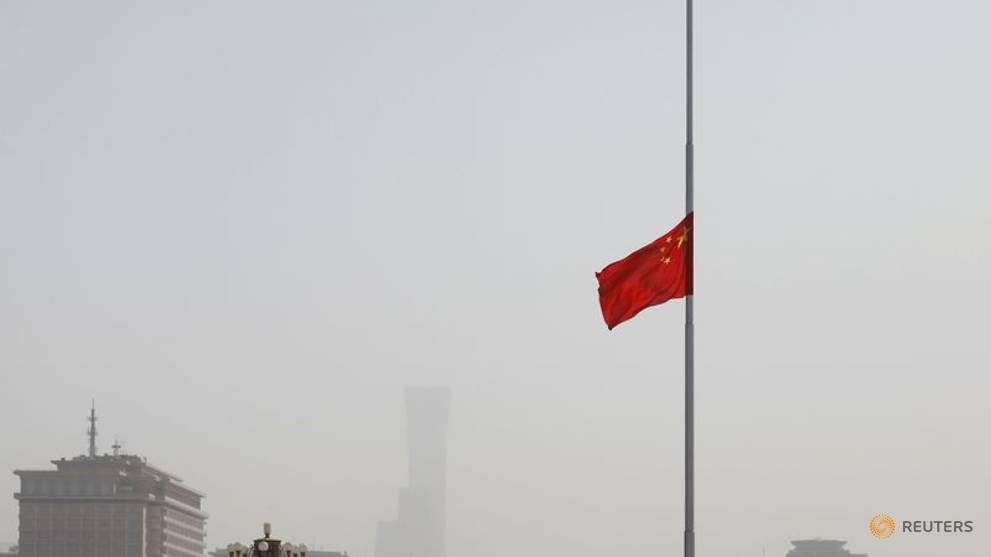 BEIJING: China on Saturday (Apr 4) mourned the thousands of “martyrs” who have died in the new coronavirus outbreak, flying the national flag at half-mast throughout the country and suspending all forms of entertainment.

The day of mourning coincided with the start of the annual Qing Ming tomb-sweeping festival, when millions of Chinese families pay respects to their ancestors.

At 10am Beijing time, the country observed three minutes of silence to mourn those who died, including frontline medical workers and doctors. Cars, trains and ships sounded their horns and air raid sirens wailed.

Explore: Interactive map of all the confirmed cases reported around the world

More than 3,300 people in mainland China have died in the epidemic, which first surfaced in the central province of Hubei late last year, according to statistics published by the National Health Commission.

In Wuhan, the capital of Hubei province and the epicentre of the outbreak, all traffic lights in urban areas turned red at 10am and all road traffic ceased for three minutes.

More than 2,500 people have died in the city of 11 million people, accounting for more than 75 per cent of the country’s coronavirus fatalities.

Authorities in the city banned all tomb-sweeping activities in its cemeteries until at least Apr 30, curtailing one of the most important dates in the traditional Chinese lunar new year calendar which usually sees millions of families travel to tend to their ancestral graves, offer flowers and burn incense.

They have also told residents, most stuck at home due to lockdown restrictions, to use online streaming services which will allow them to watch cemetery staff carrying out those tasks live.

Some resident burned joss paper, a tradition which they believe sends money and wealth to deceased relatives, on sidewalks and within the confines of their barricaded housing compounds.

As of Friday, the total number of confirmed cases across the country stood at 81,639, including 19 new infections, the National Health Commission said.

Eighteen of the new cases involved travellers arriving from abroad. The remaining one new infection was a local case in Wuhan, a patient who was previously asymptomatic.

Asymptomatic people exhibit few signs of infection such as fevers or coughs, and are not included in the tally of confirmed cases by Chinese authorities until they do.

However, they are still infectious, and the government has warned of possible local transmissions if such asymptomatic cases are not properly monitored.

China reported 64 new asymptomatic cases as of Friday, including 26 travellers arriving in the country from overseas. That takes the total number of asymptomatic people currently under medical observation to 1,030, including 729 in Hubei.