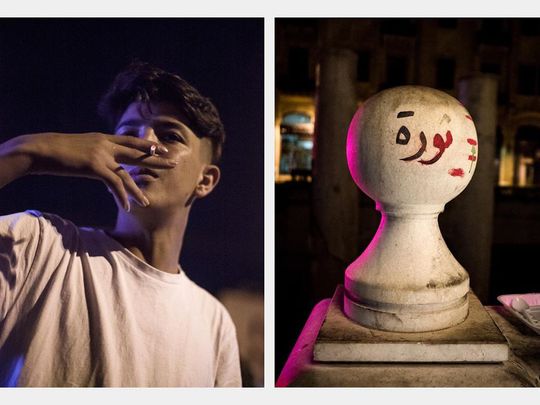 The latest exhibition at Gulf Photo Plus (GPP), All What I Want is Life celebrates the power of collective action and the resilience of the human spirit in surmounting the most difficult challenges.

The show, which borrows its title from graffiti scrawled on a wall in Baghdad, brings together works by nine artists that offer an insiders’ perspective of the recent wave of uprisings across much of the Arab world. The artists include Myriam Boulos, Tamara Abdul Hadi and Roi Saade from Lebanon; Amir Hazim and Abdullah Dhiaa-Al-Deen from Iraq; Lana Haroun and Salih Basheer from Sudan; and Fethi Sahraoui and Abdo Shanan from Algeria.

Unlike the mainstream media’s simplistic, stereotypical coverage, these artists, who are part of the communities depicted in their work, provide unique perspectives and more nuanced interpretations of the social, political and economic aspects of the uprisings. Their photographs, videos and writings look at the different motivations and demands of the protesters in each country while highlighting the universal desire of all human beings for a better future.

Haroun’s well-known image of the young woman Alaa Salah, standing atop a vehicle, leading thousands of protesters in chanting political slogans highlights the role of women in the uprising in Sudan, and embodies the hope of millions of people yearning for a dignified existence. Similarly, Sahraoui’s multimedia work, Youthopia: An Algerian Tale explores how the protests in Algeria started with young people raising slogans in football stadiums during games and spilled onto the streets with the wider public joining the movement for change and democratic governance.

Shanan’s video titled, A Little Louder, focuses on individuals within the crowds of protesters who came out on the streets of Algiers every Friday, reminding us of their daily struggles during the rest of the week and highlighting the fight for personal justice within the wider public upheaval.

Similarly, Boulos has used the fill-flash technique in her photographs to illuminate individual faces within the mass of protesters in Lebanon, highlighting the coming together of people of different ages, ethnicities, religious and political beliefs, and social strata.

Al-Deen’s photographs of the Anti-Teargas Grenade Squad in Baghdad tell the story of the courageous people whose mission is to protect civilians from the tear gas attacks by the authorities; and Hazim’s images take us beyond the action and drama of the demonstrations in Baghdad to offer glimpses of the quiet moments in between, the sense of community among the protesters, and the after-effects of a long and tiring campaign.

Visitors can take a virtual 3-D tour of the exhibition which was supposed to run at GPP until April 18 at www.alserkal.online to view all artworks, videos, wall texts, curatorial comments and details about works on sale.