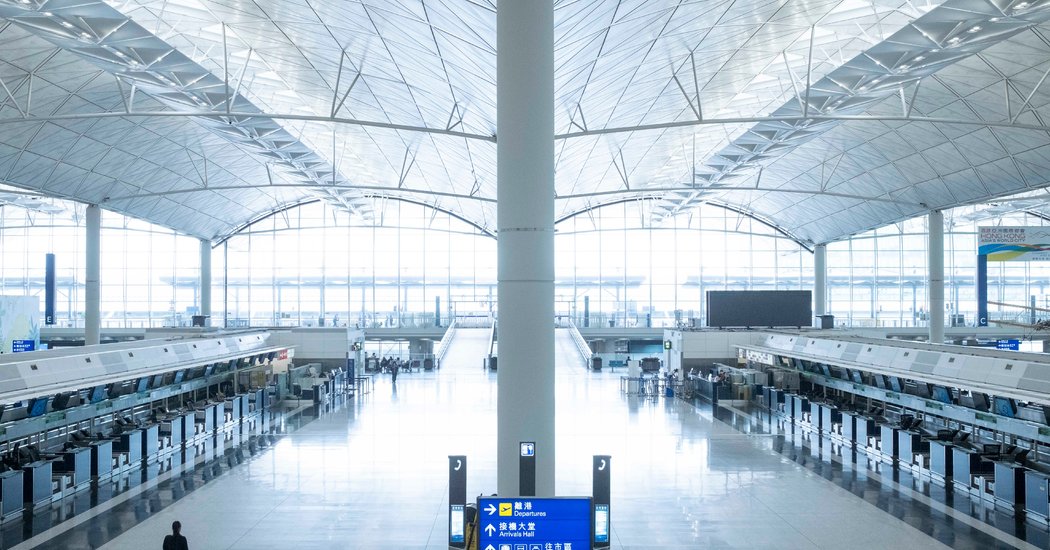 When I tell people I flew back to New York City from Hong Kong last weekend, many ask one of two questions.

The first: How long do you have to quarantine? And the second: They must have asked you a lot of questions at the airport, right?

The answer to the first is zero days. In many parts of the world right now — including Greece, Ghana, New Zealand and Hong Kong — anyone arriving from abroad must undergo a mandatory two-week period of isolation to minimize the spread of the coronavirus. In some of these places, if new arrivals are caught even running to the corner store, they may face penalties such as a $3,000 fine or six months in jail.

But in the United States, there is no mandatory 24-7-you-better-not-even-step-outside quarantine for Americans coming from any foreign location, regardless of the status of the outbreak there. Non-Americans from some perceived coronavirus hot spots have been barred from entering altogether. The Centers for Disease Control and Prevention has some special recommendations for arrivals from these same hot spots. (Hong Kong is not on that list.) And everyone in New York City is currently required to spend most of their time hidden away. But there aren’t any extra rules for people like me who just stepped off an international flight.

The answer to the second question, about what must surely have been a rigorous screening at the airport, is: Let me tell you a story. But it may not end the way you want it to.

It begins with emptiness.

When I arrived at Hong Kong International Airport on the night of March 27, I saw so few passengers that I began to wonder if all flights had been canceled. A few days earlier there had been a rumor that was going to happen.

But, no. The airport bouncers asked for my boarding pass. I think they also zapped my forehead with one of those temperature scanners, but I can’t be certain. After three weeks in Hong Kong, I had stopped noticing when masked strangers took my temperature. It’s that common.

To say the security line was short would be false, because you cannot have a line of just yourself. Once I got past that, the only other “people” I saw were beautiful unmasked Gucci models hugging horses and floating in pools projected across massive screens. (Why would you wear leather gloves in a pool? But this was not a corona-specific issue.)

Everything beyond security — the stores, the duty-free bazaar, the restaurants — was closed.

I had arrived at the airport extra early because I assumed that health policy sleuths would be asking me a bunch of questions to assess how much of a risk I was to society.

My plan had been to get through that and then find something to eat. Since arriving in Hong Kong in early March to help out in The New York Times’s bureau there, I had learned that the city was committed to keeping the food flowing. Even as schools closed, bars closed and the entire population committed itself to wearing masks nearly all the time, the restaurants stayed open, packed with people late into the night.

But I had miscalculated. There was no health policy sleuth awaiting me at the airport, and even the vending machine was empty. I found myself frozen in front of it, listening to its eerie hum, trying to remember which zombie apocalypse movie prominently features a vending machine. (I never figured it out.)

A colleague messaged me that she had heard that the Wing, a lounge operated by the airline Cathay Pacific, was open. I found my way there and learned that yes, it had a fully functioning restaurant inside.

“How much for a lounge pass?”

“It’s invite-only,” the greeter told me.

“There is nowhere else to get food or even buy water in this entire airport,” I told him. “Can’t I just pay?”

I returned to my gate, where 20 or so people had now appeared. So I was not the only person choosing to leave one part of the world that kind of had the coronavirus under control to fly to another that clearly didn’t.

As I entered the boarding line, a man in a uniform approached me. Had I been to Iran, mainland China or Italy? This was what I had been craving. But too quickly he moved on to the old standards: Had anyone handed me something to put inside my bag? (As if I would have let anyone get that close!)

My nearest neighbor on the flight, a woman in a crinkly oversize poncho, was already obsessively spritzing and wiping her row by the time I sat down. She made me feel safe.

I’m not sure I did the same for her. During my airplane dinner, I accidentally dropped my mask and stepped on it. I did have a backup, but it took me awhile to find it.

Fifteen hours later, I exited the plane in Los Angeles, where a flight attendant handed me a C.D.C. form. There was a section for me to fill out, and a section for “the screener” to check off if I had any signs of being “obviously unwell” and to fill in my temperature. This seemed promising. If they were asking me to go through screening, that most likely meant they were pushing all international arrivals to go through screening.

But the closest I got to a screener was the automated passport control kiosk. I did have two brief encounters with living, breathing humans after that; one wordlessly checked my passport and the other collected the passport kiosk’s photo of me. But neither asked me a single question.

And gauging from the nearby posters, the primary threat facing the nation was still illegal wildlife trafficking.

That was it. That’s how I re-entered America,

As I walked toward the domestic terminal for the next leg of my journey back to New York, I was overwhelmed by all the naked noses and mouths. Even the Delta counter attendants were standing around with their faces hanging out. It had been awhile since I had seen that.

At domestic security, I tried to get away with keeping my shoes on. It didn’t work. “Shouldn’t we be more focused on making sure that people are not transporting a humanity-terrorizing virus than looking for sneaker explosives?” I wanted to say. But not that much.

On my next flight, this one to Atlanta, we learned that there would be no soda or hot beverages — only water — to reduce the flight attendants’ interactions with passengers. OK, here people were making sense. A woman a couple of rows behind me asked if she could move to first class since it was emptier up there. The answer was no. OK, not that much sense.

On my final flight, from Atlanta to New York, I found myself inexplicably compelled to watch “Gilmore Girls,” even though I had never liked the show and didn’t have the right headphone jack. After 20 minutes of silent scenes of small-town, close-contact life, it hit me: People in TV shows rarely touch their face.

We landed, three flights and 27 hours after my journey home began. When I had dragged my suitcase to the airport on March 9, only 20 confirmed coronavirus cases had been reported in New York City. None had led to death.

And now, less than three weeks later, New York City had surpassed 32,000 confirmed cases and 670 virus-related deaths. (As of Friday it had risen further to 57,159 cases and 1,867 reported deaths.)

Now that New York City was an epicenter of the outbreak in the United States, surely someone was going to ask me something?! Of course not. I left the airport and made my way home to Brooklyn.

Later that night, I told my wife how disappointed I was by the lack of interrogation.

“What specifically did you want them to ask you?” she asked.

I tried to think of my most critical question: “Might you have come in contact with an infected person?”

“What were you hoping that would accomplish?” she asked.

It was fair criticism given that pretty much everyone’s answer at this point, in Hong Kong and in New York, would be yes.

Further undermining my own need for interrogation, researchers have long said that airport screening for most diseases is pretty useless. The only consistent benefit seems to be the opportunity to collect information for future health sleuthing.

Still, that’s not nothing. Might as well ask us to hand in those C.D.C. forms.

I pulled the wrinkled document out of my bag and read the fine print. At the bottom it listed about 20 destinations. Travelers from these locations were required to fill it out, it said. Hong Kong wasn’t included. So why had anyone bothered to give it to us in the first place?

Maybe, like me, they needed to believe there was something more that could be done.