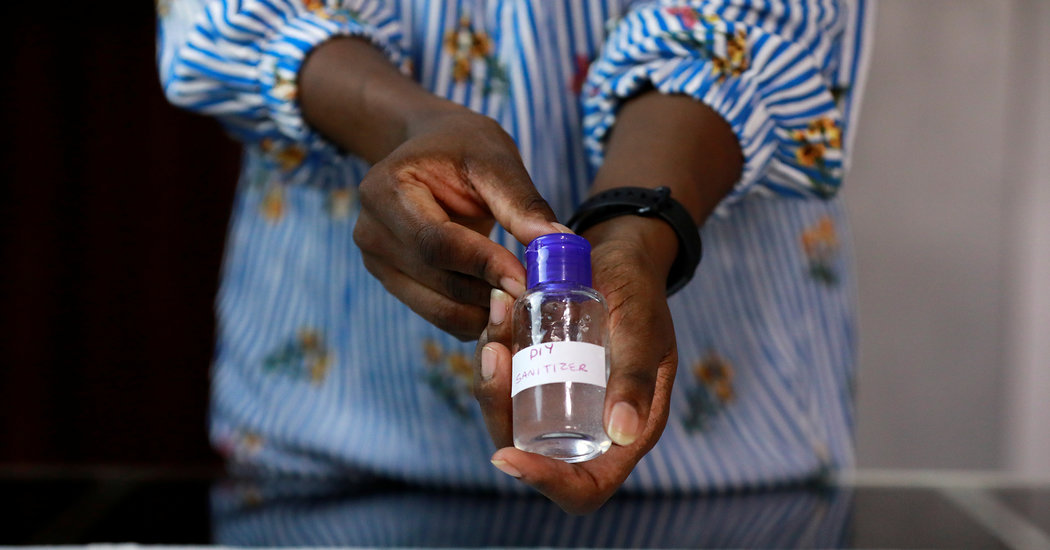 Ms. Ippoliti noted that the final result was runny and not at all like store-bought sanitizer. “But if I am quick, I can get my hands covered with it without losing too much in drips,” she said. She put a batch in a spray bottle for her husband to use at work, but a week later, the homemade sanitizer had gummed up the sprayer, so she switched to a flip-top bottle.

Ms. Ippoliti said she took the time to make D.I.Y. sanitizer because her husband is still leaving the house to go to work during the pandemic. “He’s out there every day slathering his hands with homemade sanitizer because that’s the best we can do right now,” she said.

Some sanitizer recipes on social media suggest using vodka rather than rubbing alcohol, but the alcohol content in vodka is typically too low — around 40 percent — to make an effective sanitizer. And while you can still find industrial grade 99 percent alcohol (often used to clean electronics), experts say it’s not intended for human use and would be too harsh on skin.

The website LiveScience.com, had better luck making sanitizer by mixing alcohol and glycerin, a viscous liquid used as a skin moisturizer. “One thing you should keep in mind, this is probably not going to feel like the commercially-produced hand sanitizers that you’re used to,” said writer Mindy Weisberger.

Gel hand sanitizer was something of a technological breakthrough when it was invented in the late 1980s. It isn’t made just by mixing a few ingredients in a bowl. It uses a combination of alcohol, emollients and thickeners to create a gel that contains at least 60 percent alcohol and spreads easily across our hands before it evaporates.

“Hand sanitizer is regulated by the F.D.A. as an over-the-counter drug, and there are robust regulations around its manufacture,” according to a statement from GoJo Industries, maker of Purell, which declined to comment outside the statement. “We caution against making your own hand sanitizer, due to concerns with the safety and efficacy of the final product.”

To ease shortages of hand sanitizer for hospitals and essential workers, some alcoholic beverage companies are switching their alcohol production to make sanitizer. Even those companies aren’t trying to replicate gel sanitizer. Instead they are making a spray version based on World Health Organization guidelines. It includes either a 96 percent ethanol or a 99.8 percent isopropyl, plus a 3 percent concentration of hydrogen peroxide to kill any contaminating bacteria spores, plus glycerol (another name for glycerin), as well as distilled water.