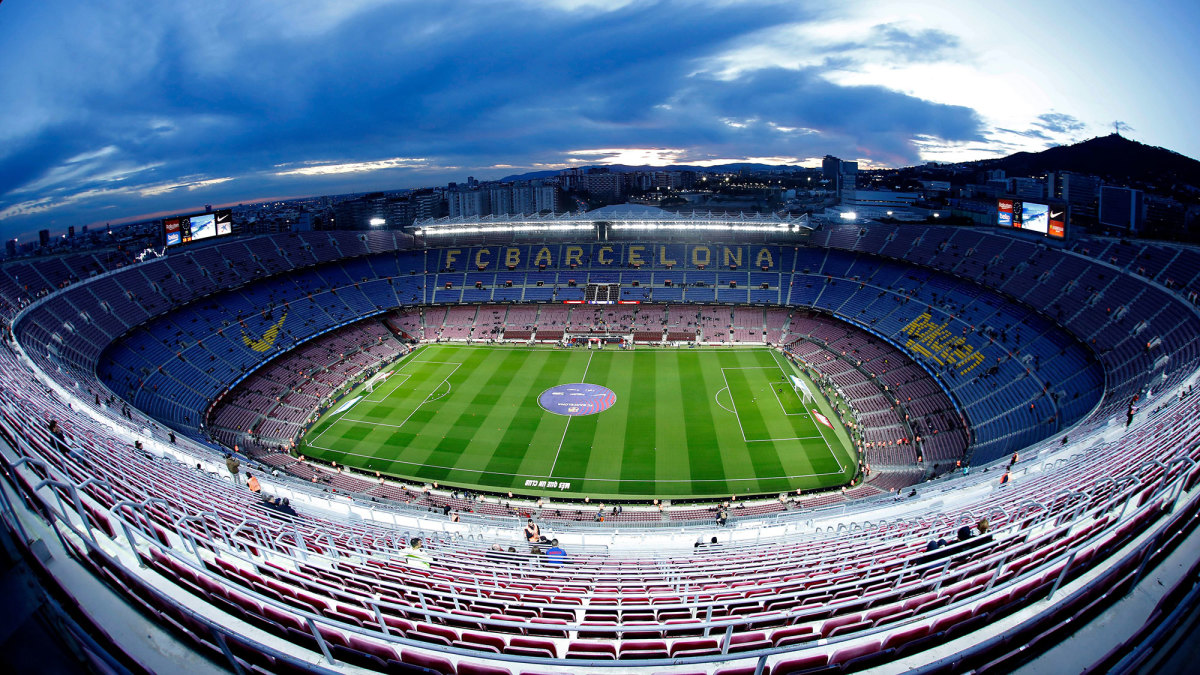 The breadth, depth and complexity of the coronavirus pandemic seems to evolve and expand daily, as the crisis careens from turning point to turning point in matters of survival and, in less crucial ways, in its impact on the institutions of daily life.

And so Thursday seemed like another turning point for world soccer, which appears to be facing a period of increasing upheaval despite the almost total lack of games (you do you, Belarus).

It was just Wednesday that UEFA canceled all June internationals (Euro 2020 was already pushed back a year) as part of a focused effort to finish the 2019-20 club season. Any related deadlines “are postponed until further notice,” the governing body added, thereby giving domestic leagues—as well as the Champions League and Europa League—ample leeway in these unprecedented times. Finding a safe and fair way to complete the competitions already underway appeared to be the priority.

Then came Thursday, and the world changed again. The Belgian Pro League’s board of directors announced its unanimous decision to end the season after 29 rounds. It’s expected to become officially official when the general assembly votes on April 15. Club Brugge, which holds a 15-point lead over Gent, will win its 16th title, while a committee will convene to determine promotion and relegation.

As weeks go by and it becomes more difficult to determine when it’ll be safe to play again, the Pro League’s choice could create a continental domino effect. Does it make sense to resume the season over the summer, or in a manner that’ll make a full 2020-21 campaign impossible? The calendar is already facing a crunch thanks to international postponements, and the pandemic’s deepening impact continues to rearrange priorities. It may be easier simply to stop.

UEFA, the European Club Association and the European Leagues group responded Thursday evening, issuing a letter expressing confidence that play “can restart in the months to come,” and that moving to cancel domestic competition “is, at this stage, premature and not justified.”

The letter, as reported by the Associated Press, indicated that soccer authorities hoped to determine the best course of action by mid-May, and that “scenarios encompassing the months of July and August” were the focus.

If play resumes in August, assuming a preseason in July, there will have been five months between games. And this is only if the pandemic doesn’t get worse before it gets better. Those five months will have felt like an eternity. Players will have slid further and further from fitness and form. Clubs could be playing in empty stadiums, or leaving it to municipal authorities and fans to decide whether attendance is worth the risk. The threads of momentum, narrative and trajectory that remained from early March will have dissolved completely. It won’t feel like the same season. The price to pay for cutting it all short, whether its owed to TV networks or sponsors, could be worth paying to avoid that charade. The Belgians obviously think so, and they’re not alone. Thursday’s letter may be the first element of UEFA’s effort to stem the tide.

Following the Pro League’s announcement, the Dutch De Telegraaf reported that Ajax, AZ Alkmaar, Feyenoord and PSV Eindhoven—the top four clubs in the Eredivisie standings—have “made it clear” to the KNVB that the season should be called off.

“The Eredivisie is dead,” Ajax director of football Marc Overmars told the paper.

PSV GM Toon Gerbrands said, “We think it is in no way justified to finish the remainder of the matches. First, because of public health. That is the most important thing. … In addition, we believe that playing through the summer, as suggested by UEFA yesterday, is not feasible. What do we do, for example, with players who are under contract until June 30? And there are many more unanswerable issues.”

Also Thursday, Brescia president Massimo Cellino said his club, which is last in Serie A and nine points from safety, will forfeit its 12 remaining matches if the season resumes.

“This season doesn’t make sense anymore,” he told La Gazzetta dello Sport. “I don’t care at all about relegation. So far we have deserved it, and I have my blame in that, too.”

There’s even been whispers of a cancellation in England, and nowhere is that being watched more closely than Merseyside, where Liverpool was just six points from its first league title in 30 years when play was suspended. The Liverpool Echo reported this week that West Ham United (publicly), Tottenham Hotspur, Brighton & Hove Albion and Watford (all privately) were in favor of ending the Premier League season.

Players are chiming in as well. Spurs striker Harry Kane said during an Instagram chat that, “There needs to be a point where enough is enough. … If the season’s not completed by the end of June we need to look at the options and just look forward to next season.” And Manchester City’s Kevin De Bruyne told Belgium’s Het Laatste Nieuws, “I think that waiting too long to make a decision could cause problems for next season. … It would be a shame to stop early after such a good season, but if it avoids problems next year, it must be done.”

Four clubs and two players isn’t critical mass, but there’s more of this sort of talk now than there was two weeks ago, and it’s only likely to increase as the delay continues. People aren’t going to become less anxious.

While UEFA, the trade associations and the TV networks plead for patience (or a medical miracle), they could also pause and find a silver lining to the Pro League’s pronouncement. Because there’s still a chance to save the 2/3 of the season that’s already been played. Belgium didn’t void its season. It just ended it. Yes, that may be a bit less controversial because the clubs were just one game short of a home-and-home round robin, and because Brugge held such a big lead. But it’s a precedent nevertheless, and one upon which UEFA should insist if further cancellations are imminent.

Ending the season early is bad, and almost certainly costly. But pretending it never happened is worse. Confronted with what’s evolved into a global tragedy and faced with nothing but less-than-ideal options, the least leagues and governing bodies can do at this point is honor the sweat, effort, money, preparation and emotional investment that went into staging the first two-thirds of the campaign. The games that weren’t played aren’t more important than the games that were.

Count the goals, statistics and records, publish the standings, and don’t tell the fans who bought tickets to those games that they never happened. Don’t sully the match-day memory. Everything that occurred, and the points that were awarded, was an honest reflection of the players and teams on the field that day. The cumulative tally of those events and points is equally fair. Clubs weren’t saving themselves for a stretch run. That’s not how European leagues work. The tables as they now appear may not be complete, but they are the result of every team’s best effort.

FIGC president Gabriele Gravina told Italy’s TMW Radio that ending the Serie A season early would be a “grave injustice,” but also would require naming a champion. Juventus holds a one-point lead over Lazio. But according to ESPN, Gravina said the club that still claims the Scudetti stripped in 2005 and 2006 now “have expressed a dislike of such of a solution.”

So Juve doesn’t want a ninth straight title. Fine. Perhaps Porto will not want to be declared Primeira Liga champion with a one-point lead on Benfica. Maybe Barcelona will turn down another La Liga crown because it’s ahead of Real Madrid by just two (and maybe not). The leagues themselves—the clubs collectively—could agree that no trophy will be awarded. That’s also fine. There have been seasons without champions. Serie A officially had no winner in 2005. The 1993 Ligue 1 title was stripped from Olympique Marseille and then never redistributed. In relative terms, the NCAA does this pretty regularly, most recently to Louisville’s 2013 men’s basketball team.

But in each case, that season’s games were counted, and the play and performances were acknowledged. UEFA could leave it to an individual league whether to name a champion or melt down the medals for next season. But the standings should remain, in part for posterity and in part to identify the participants in the 2020-21 Champions League and Europa League (if there is a 2020-21 season). To the teams in contention for those berths that miss out because they won’t have the chance to make up their points deficit, sorry. There is no way, in these messy times, to find a perfectly clean solution. Someone is going to be disappointed. But next season shouldn’t be kneecapped just because this one couldn’t be finished.

Relegation poses another problem and may require an innovative approach if more countries follow Belgium’s lead. Theoretically, freezing the standings would doom the bottom clubs. But leagues also could decide there’s a difference between ending a second-place team’s bid for the title—they have no claim, only hope—and inflicting the trauma of relegation (especially in tough financial times) before the entire schedule is complete. A one-year reprieve would be the solution. Promote but don’t relegate. Find room for the extra games by adding mid-week fixtures—streamlining or eliminating the various domestic cups, super cups and friendlies—and then relegating the additional sides in 2021, thus returning leagues to their optimal size.

It’s unorthodox, but there’s nothing wrong with a little mercy in times like these. If the football world is returning to normal by 2021-22, that’ll be a significant win. And if there’s an asterisk next to the 2019-20 season, or the name of its champions, that’s a small inconvenience in the grand scheme. An asterisk is preferred to no season at all.