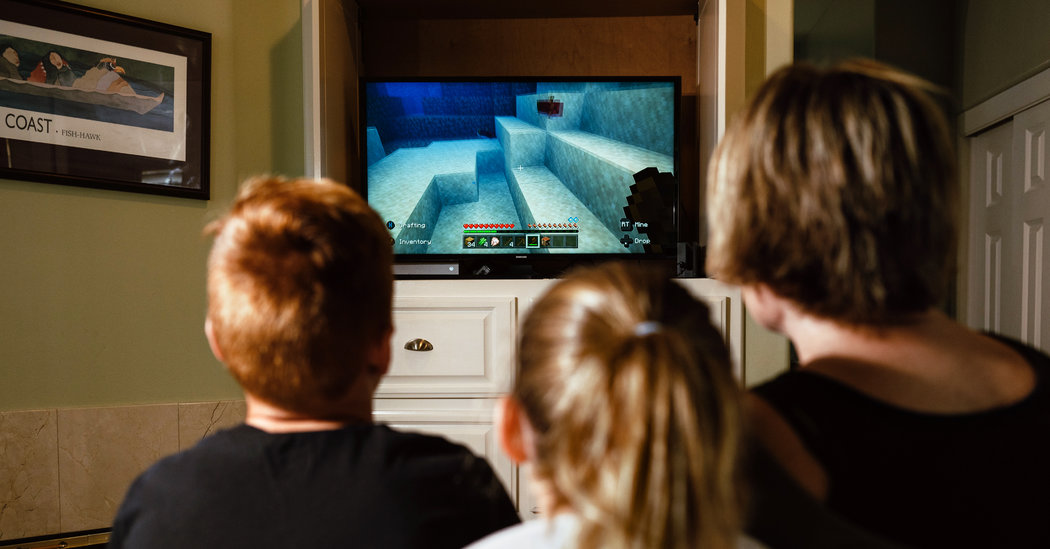 You’ve binge-watched “Paw Patrol.” You’ve sat through “Frozen II” a dozen times. There must be something better — more interactive and fun — to do with your kids while stuck at home. Look at it as an opportunity to connect and build relationships with your children by doing something together: playing video games. The trick, of course, is finding ones that you actually want to play without driving yourself crazy.

The first step: Find out what they are already playing. Express genuine, non-patronizing interest and you might find some common ground. If your kids already play, ask them to explain their game to you, no matter how inane or mysterious it may seem. Ask them to let you try it, under their guidance. You may be surprised at your response.

It’s likely that your kids are into at least one of the big three games popular with children — Fortnite, Roblox and Minecraft — each of which has hundreds of millions of players.

If your kids play Fortnite, in which 100 players battle until only one is left standing, you may find the game interesting to watch but you should have realistic expectations about actually playing with them. Fortnite certainly rewards teamwork, cooperation and strategic planning, but it also requires a level of reflexes, eye-hand coordination and manual dexterity beyond almost anyone who can remember the Clinton administration.

Roblox is not a single game but rather a platform for thousands of different mini-games created by users. Some of those mini-games are more manipulative in trying to extract real money from players than others. As with Fortnite, it is unlikely parents will have much fun with Roblox, though for a different reason: Much of Roblox is just simplistic.

Minecraft, however, probably has the broadest crossover appeal between adults and children of any video game, and for good reason. Minecraft’s basic formula — explore a newly created world, find materials, build structures — generates a cycle of discovery, creation and community stimulating enough for curious adults but accessible enough to captivate even grade-school children. If your kids already play Minecraft, you should give them the opportunity to introduce you to a new hobby, as long as you can stand the blocky graphics.

If none of these options are appealing, don’t give up. There are plenty of other choices that can engage both parents and children, both multi-user games played simultaneously and single-player games played as a team. And most are available for multiple systems.

One final piece of advice before the recommendations: Don’t let yourself be put off by cartoony graphics. Just as the best animated films are written to entertain both young children and their parents, games often use a similar sleight-of-hand: wrapping subtle play systems in simple images.

Nintendo Switch. The Switch is varied enough to include games for every age, but before children can even play properly they may enjoy “helping” you through a game that pushes some nostalgic buttons. I know parents who are currently playing through Switch editions of Super Mario Bros. and the Legend of Zelda with “help” from 4-year-old offspring. The new, wildly popular Animal Crossing for Switch is a perfect example of a deep game hidden beneath a kiddie veneer.

Just Dance 2020. We’re all struggling to get the exercise we need — not to mention moments of pure fun. Just Dance can provide both, and as much healthy sweat as you and the family can handle. It includes tracks from top pop stars like Ariana Grande, Ed Sheeran and Billie Eilish.

Overcooked 2. Chaos and laughs emerge from the kitchen as up to four players try to cooperate to prepare and serve meals to ever more demanding customers. Possible bonus: It may give children additional appreciation for their real-life personal chefs.

Lego. Yes, Lego still makes plastic construction blocks, but the Lego concept has also been extended to video games in worlds including Star Wars, Harry Potter, Marvel, DC and Lord of the Rings. The games tend to be great in their own right, but can also help you introduce children to a franchise you already love.

Rock Band 4. A full set of new instrument-like peripherals can run into hundreds of dollars, but Rock Band can provide a fascinating facsimile of actually playing music.

Rocket League. Flying cars with rockets smashing a ball around to play high-velocity soccer. As with real soccer, teamwork overcomes all.

Stardew Valley. Despite its cutesy appearance, the strategy and base-building in Stardew Valley are approachable enough for children (and novice adults) while also rich enough for expert gamers.

LittleBigPlanet 3. LittleBigPlanet is not only a whimsical, delightful “platformer” — a game where players traverse treacherous, puzzle-like landscapes — but also a construction kit that lets users create and share their own levels with a global community. Available exclusively for Sony PlayStation consoles.

Cities: Skylines. The modern, sophisticated king of the city-building genre first popularized by SimCity, Cities: Skylines and its many expansions make urban planning and disaster recovery as difficult as you want to make them.

Forza (Windows / Xbox) and Gran Turismo (PlayStation) are the prestige racing franchises for their respective platforms. The racing may be virtual but the adrenaline is real.

7 Billion Humans. “Educational” games are usually a snooze, but 7 Billion Humans teaches the basics of computer programming almost before you’ve noticed. You control an Earth’s worth of mindless little people. Can you figure out the correct instructions so they can avoid their own destruction?

Sid Meier’s Civilization VI. The classic Civilization series has long tasked the player with guiding a fledgling society from the Stone Age to the space age. The latest edition is an engaging successor for both adults and older children with an interest in strategy and history.

World of Warcraft. If you want to go off on a long fantasy adventure in which you and your children will have to learn to work together and depend on one another, the venerable World of Warcraft still provides the most expansive and appropriate virtual realm. You will need multiple computers, however. I suggest starting with the classic version and then graduating to the modern “retail” version if you get hooked.