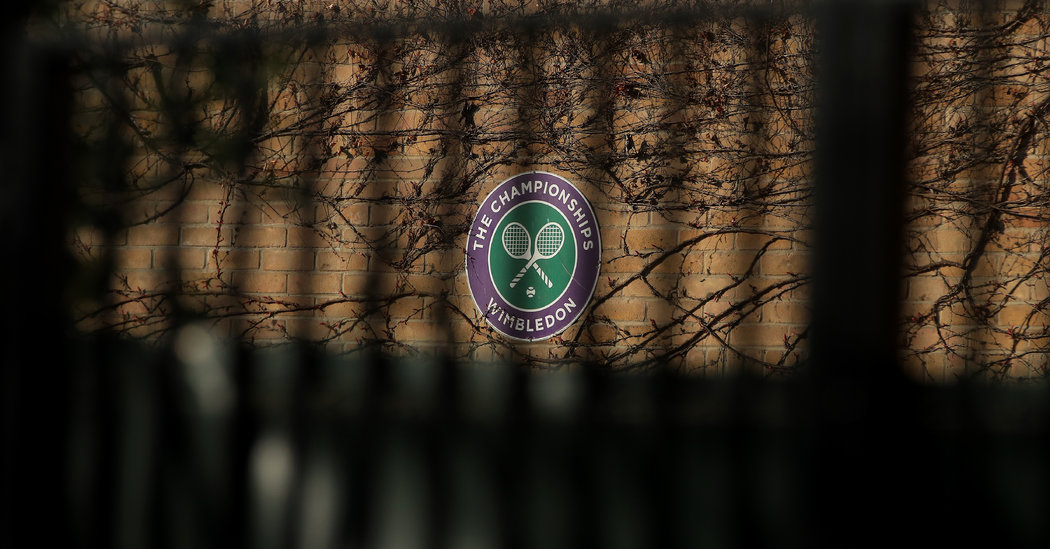 With tennis shut down amid the coronavirus pandemic, the game is still playing for its future as Roger Federer practices trick shots in the snow against a wall at home in Switzerland.

Wimbledon’s cancellation, its first in 75 years, made it clear when it was announced on Wednesday that the rest of the 2020 season was in danger. Disputes over finances and space on the calendar are already underway, with more turf wars looming.

Even if play does resume in July, as currently planned, a forced four-month break will mean huge losses for the majority of players, all of whom are independent contractors, and for their support staffs. Some tournaments, particularly lower-tier events, are in danger of disappearing, without insurance or, for now, any guarantee of a financial bailout.

Lower-ranked players are joining forces to petition for financial relief, and some have requested that the tours advance, at the very least, part of their guaranteed first-round money to help them through this difficult period. Wimbledon, based on its strong financial position, might even provide some direct assistance to players and other tournaments.

“We are still discussing all of this,” said John Isner, the top-ranked American men’s player and a member of the player council for the ATP, the men’s tour. “The top players in the world, most of those guys are going to be OK. I personally will be OK, but some people literally rely on a paycheck week after week. So the struggling professional tennis players are no different than anyone who has been furloughed or laid off through all of this in any profession.”

But among the people who need help in this emergency, who will take priority? The players and their support teams? The tournaments and their staff members?

“The ATP is 50-50 players and tournaments, so if you’re bailing out players you have to bail out events as well,” said Chris Kermode, who was the head of the men’s tour from 2014 to 2019.

The question is whether the players will take this opportunity to change that equation and finally break out on their own: creating a true union instead of being directly tied to the tournaments.

“What’s always sort of hampered us to to try to change things is the fact we’re always playing and always so busy and now we have a lot more time on our hands to assess things,” Isner said. “I know a lot of people out there speak of unionizing. We’ll see if that’s a possibility. If there ever was a situation that could arise, I would imagine it would be right now.”

For now, the most intriguing match at this edgy stage is the one between the French Open organizers and tennis’s other power brokers.

The tournament leadership’s unilateral decision on March 17 to abandon its traditional slot in late May and early June and announce a move to late September and early October has created an ocean of bruised feelings.

The shift in dates encroaches on other tournaments already scheduled in those calendar slots and deprives other events of the chance to move into that same window.

“From what I’m hearing, the French Open has recognized pretty quickly the error of stepping on people’s toes without giving them enough warning,” said Jim Courier, a two-time French Open champion and a former world No. 1. “I think there have been lots of discussions among the powers that be since then.”

That has been confirmed by the sport’s powers, including David Haggerty, the president of the International Tennis Federation.

“I think they’ve learned the need to collaborate on decisions that are such important decisions for tennis,” Haggerty said, referring to the French Open brain trust in a telephone interview on Thursday from London. “So the good news is that the seven stakeholders have had some regular conversations of late, talking about calendar and impact and the future.”

The seven stakeholders are the leaders of the four Grand Slam tournaments, the men’s tour, the women’s tour and Haggerty’s I.T.F. Each controls different parts of the calendar and the tennis ecosystem, which helps explain why infighting remains as much a part of the game as the drop shot.

As in all sports affected by the pandemic, the future will depend on how long the pain lasts. Long-term losses could mean that tennis’s stakeholders might finally be willing to cooperate and fix some long-term problems, above all the sport’s overstuffed, oft-conflicted schedule.

“When times are good, no one really wants to change,” Kermode said in an interview from Monaco on Thursday. “You only get people’s attention when businesses start stopping their incremental growth, and you really get their attention when it starts to go down. No one envisaged this situation, but this is the time where it can have a massive reset.”

Though Kermode thinks that sponsorships and the market for media rights will recede for quite a while, he also sees hope in the potential for unity among the sport’s stakeholders. The French Open’s move appears to have helped the cause, if only by allying every other key organization against it.

“I think if this goes all the way through 2020 and there is no more tennis this year,” Kermode said, “it will be a true turning point for the sport, a radical moment.”

After the round of cancellations on Wednesday, which included Wimbledon and all the preliminary grass-court events, the sport is on hold at all levels until at least July 13.

The break could be considerably longer unless the coronavirus situation improves significantly in Europe, home to the majority of tour players, and in North America, where the main hardcourt season begins in July and culminates with the United States Open in New York.

What is clear is that, in the short term, preserving the biggest paydays should be the priority.

For now, the U.S. Open site is being converted into a temporary 350-bed hospital and the All England Club, which stages Wimbledon, has made its grounds available to the British authorities.

But at this point, the U.S. Open is sticking with its scheduled dates from Aug. 31 to Sept 13. Cancellation would be a huge blow for a tournament that has total revenue approaching $400 million and that, unlike Wimbledon, is not believed to have insurance that would cover most of its losses during a pandemic.

Income from the U.S. Open helps fund the sport in the United States at all levels, all year round. Wimbledon, which helps fund tennis in Britain, could absorb such a blow more easily because of its insurance coverage and big reserves.

The U.S. Open will surely explore all alternatives before following Wimbledon’s example, but the options are limited in part by the French Open’s land grab and in part by the New York weather. (Playing outdoors much later in the year is impractical.)

The French Open, with an estimated $300 million in annual revenue that is vital to French tennis, has announced its new dates as Sept. 20 to Oct 4. But organizers are under intense pressure to push back at least another week to provide a bigger buffer for players as they recover from the U.S. Open and shift back to clay and Europe.

An extra week’s buffer could also preserve some of the events scheduled for those autumn dates, including the Laver Cup men’s team event in Boston in late September.

But moving a week would create new conflicts, including one with the China Open, a top-tier women’s event scheduled to begin in early October in Beijing.

Conflicts are inevitable in this nightmarish moment. Though the Grand Slam events deserve priority, the game’s bigger-picture focus should be on creating stronger connections. Tennis, like all sports, will need those more than ever in the leaner seasons to come.