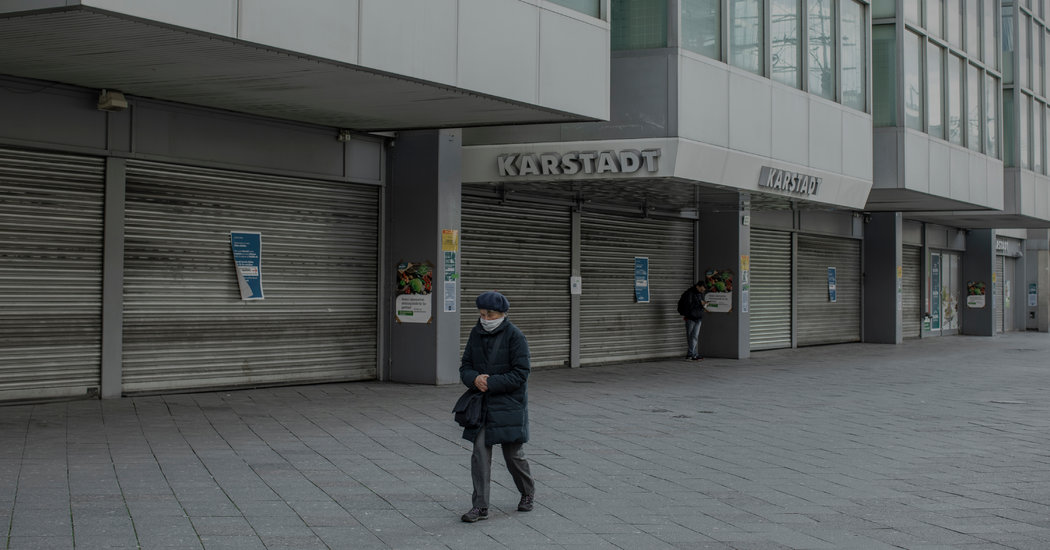 BERLIN — When Germany shut down public life to halt the spread of the new coronavirus last month, Laurenz Bostedt, a freelance photographer, watched as one contract after another was canceled, until his entire expected income had disappeared.

On Tuesday, 5,000 euros, or about $5,400, landed in his bank account, just three days after he had submitted an application for immediate assistance. The city-state of Berlin had pledged on March 19 that money would be distributed quickly to self-employed people and small- business owners who were unable to cover their basic expenses.

To the shock of many Berliners, hardened by regular stacks of paperwork from the city’s bureaucracy, it was. On Thursday, just five days after the application process opened, Berlin’s government said it had already paid out more than $1.4 billion to more than 150,000 self-employed individuals or businesses with fewer than five employees.

“We are all pretty amazed,” Mr. Bostedt said in a telephone interview. “It went surprisingly fast and was all refreshingly well-organized.”

Small employers and freelancers like artists, fashion designers, computer programmers, hair stylists, web designers, coffee shop owners and club operators account for a quarter of all business in Berlin. They were too small to qualify for the initial aid from the federal government that was aimed primarily at keeping big business afloat, leading the city to set up a rescue package meant specifically for them.

Across Europe, countries from Austria to Italy, France and Spain have quickly drawn up relief packages aimed at not only preventing larger business from laying off employees, but also ensuring that small entrepreneurs are able to make basic payments. A worker who loses a job qualifies for unemployment benefits, but government orders to stay at home put self-employed people in an unusual position — not out of a job, strictly speaking, but unable to work.

Nowhere have the benefits been as generous, or as swift, as in Berlin — a city that has become the butt of endless jokes over its perpetual inability to open an international airport, originally slated to begin passenger service in 2011.

“Three days waiting to be called up, then about 10 minutes to fill out the form and after two days, the money was in my account,” George Kvasnikov, an interface and graphic designer, said over Twitter. “Very stress-free.”

Italy introduced payments of nearly $650 for self-employed and seasonal workers on Wednesday. Within hours of opening applications, the website of the country’s social security agency crashed under the deluge of requests — 300 per second by Thursday morning. The authorities will vet the applications before making payments.

The French government is offering the country’s estimated 600,000 self-employed people up to more than $1,600 if lockdown orders force them to stop work entirely, or cost them 70 percent or more of their business in March. Applications for the money are being processed and some tax advisers are urging clients to message the tax authority if they are in need.

In Spain, the benefits largely involve delayed tax payments and tax rebates rather than cash handouts. To qualify, independent workers have to prove that their monthly income fell at least 75 percent, compared to the average over the previous six months.

All Germany’s 16 states are offering aid payments, similar to those in Berlin, to the smallest businesses and the self-employed. While the states are contributing their own funds, they are also drawing on support made available by the federal government as part of its overall spending package to help the economy weather the shutdown, which Chancellor Angela Merkel ordered on March 22.

Those measures banned restaurants from seating patrons — they can offer deliveries or takeout orders — and forced other nonessential businesses to close, in addition to banning people from meeting in groups larger than two.

Each state has its own guidelines for who qualifies for aid, and not all of them have made the application as simple as Berlin’s. Small businesses with some savings available face a challenge in weighing whether to dip into that money now, or draw from the aid, only to possibly find it taxed later in the year.

“It was all hastily thrown together,” said Hasso Mansfeld, an independent consultant from the western city of Bingen am Rhine, who pored over the fine print to make sure he was following the law before submitting an application in his state, Rhineland-Palatinate.

“It would have been easier if they had just given us ‘helicopter money’ — all small businesses get a set amount,” Mr. Mansfeld said in a telephone interview.

That suggestion resembles the stimulus plan adopted by Congress and President Trump, which includes checks, typically $1,200, for most American adults, and expanded jobless benefits, including payments available to freelancers and gig workers, who ordinarily would not qualify.

Authorities in Berlin, mindful of the role that entrepreneurs and freelancers in the arts and other creative sectors play in the city-state’s economy, were among the first in Germany to pledge financial assistance to them.

They also streamlined applications and approvals, requesting only that applicants be honest and simply checking their tax identification number and a few other basic facts rather than verifying all the information before making payments. But they warned that anyone later determined to have submitted a false claim would have to repay the money.

“Berlin is lively and great, thank in no small part to the commitments of its artists in all creative areas,” Klaus Lederer, the city’s minister for culture, said after the local government had passed legislation to provide the relief. “The cancellation of countless cultural events and the closure of venues triggered by the corona pandemic is an existential threat to many of them.”

He pledged that the process would be easy and move quickly, in part to ensure that anyone needing to pay their rent for April would have money to do so.

Mr. Bostedt, 29, was in that position. With the shutdowns, the extra jobs he’d take on to make ends meet when things got tight, including setting up trade fairs or working in restaurants, also dried up.

He was one of the thousands of people waiting to get a number needed to submit an online application, hours after the Investment Bank of Berlin opened the process last Friday. He was nearly 25,700th in line and waited 30 hours for the push alert to his phone that it was his turn to apply.

Having done his paperwork in advance, he felt no qualms when he checked the box that amounted to a sworn oath that he needed the money to cover his basic expenses. Two working days later, the money arrived.

“I had no other options,” he said. “My landlord was expecting the rent.”