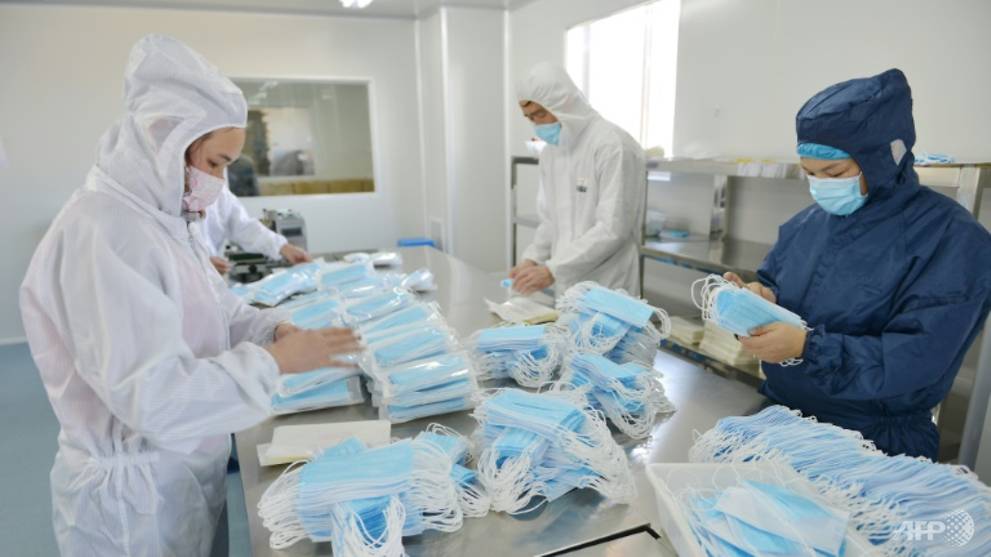 WASHINGTON: US politicians have voiced fury over Beijing’s handling of the coronavirus crisis but they face a harsh truth – the United States desperately needs China’s supplies, some experts say.

China before the crisis produced nearly half of the face masks imported into the United States – which in normal times cost less than a dollar but have disappeared from shelves amid growing calls for ordinary Americans to wear them when outside.

As China appears to have contained its own outbreak of the disease, which has infected more than 1 million people worldwide since first emerging late last year in Wuhan, it is now the first resort for protective gear sought across the world.

“China is a massive source of supply for these products at a time of incredible need, both in the United States and globally,” said Chad Bown, a senior fellow at the Peterson Institute for International Economics.

“So if you’re not open to China and trying to buy these from China right now, you really have no hope,” he said.

US manufacturers have stepped up, with 3M and Honeywell together raising production of masks to 70 million per month, but that’s well below needs and the Department of Health and Human Services is seeking to buy 500 million masks for a strategic stockpile.

The health crisis has meant a seller’s market for Chinese manufacturers of so-called N95 masks, which are designed to block out 95 per cent of very small particles.

Dan Harris, a Seattle lawyer who represents companies in emerging markets, wrote on his blog that he recently heard from three companies that were each scammed out of more than US$1 million after placing N95 mask orders from China – with one firm receiving “dusty, mouldy Halloween masks”.

Bown found no evidence in the available early data that China has cut off supplies or diverted them to politically favoured partners such as hard-hit Italy.

Its exports of personal protective equipment declined in the first two months of the year – but by less than China’s overall exports, he said.

Still, China exerts power as it supplies 48 per cent of personal protective equipment imported to the United States and 50 per cent to the European Union, according to Bown’s calculations.

“When you start a trade war with a country that you deliberately antagonise while you’re still reliant on them for certain things, you’ve sort of done this to yourself,” Bown said.

President Donald Trump has veered from lashing out at Beijing to praising cooperation with President Xi Jinping.

Trump, who has slapped tariffs on billions of dollars of Chinese goods since taking office, said Wednesday that China’s figures on the coronavirus outbreak “seem to be a little bit on the light side”.

He appeared to be confirming a Bloomberg report that quoted US intelligence as saying China has deliberately downplayed its virus cases.

Trump’s former national security adviser John Bolton – who has himself faced criticism over preparations for a pandemic – on Thursday pointed to the alleged underreporting to call for the United States to pursue “new policies to prevent continued US over-reliance on China in our supply chain”.

Yanzhong Huang, a global health expert at the Council on Foreign Relations and Seton Hall University, said face mask manufacturing has grown in China for the same reasons as many export industries – production is low-tech and labour-intensive.

A Senate hearing last year heard that more than 80 per cent of the key ingredients in drugs in the United States originated abroad – mostly in China or in India, which by contrast has warm relations with the United States.

Commentary: As the US plays the blame game, China steps up its global leadership

Huang expected the United States after the crisis would move to shorten or diversify the supply chain for active pharmaceutical ingredients.

But he also noted that the United States dominated in plenty of vital drugs, including in treating non-communicable diseases of rising concern in China.

“China has leverage but we should just keep in mind that it is not a one-way street. The US also has its own leverage,” he said.

“I don’t think it would be wise for any country to use this, really, as a weapon.”

Senator Tom Cotton, a Republican outspoken in his criticism of Beijing, has proposed a complete ban on buying active pharmaceutical ingredients from China in 2022.

Bown, the economist, said countries should not aim for self-sufficiency in medical supplies but rather seek a diverse global supply.

“The point is, with a pandemic like this, nowhere geographically is safe anywhere in the world,” Bown said.