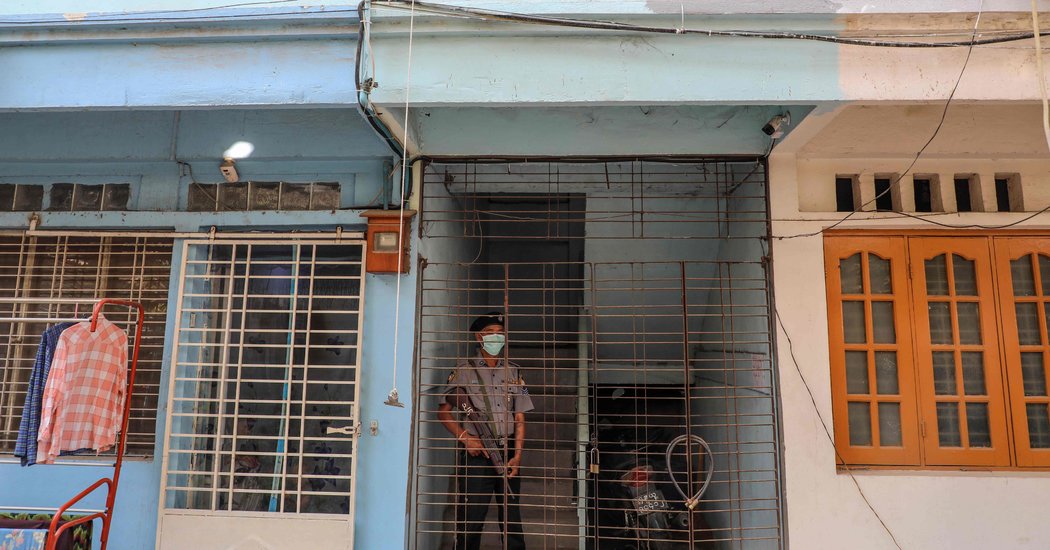 MANDALAY, Myanmar — In a new crackdown on free speech, the Myanmar authorities have arrested a prominent editor on terrorism charges for publishing an interview with a rebel army spokesman, and on Friday they were seeking two more editors on similar charges.

In recent days, the authorities have raided journalists’ homes and offices, interrogated reporters about their coverage and blocked websites that were reporting on armed conflict with ethnic groups. News sites run by the three editors were among those blocked under the government order.

Journalists and human rights activists said the government’s actions — including the arrest on Monday of U Nay Myo Lin, editor in chief of Voice of Myanmar, an independent news site based in Mandalay — were an attempt to reinstate authoritarian measures like those of Myanmar’s former military regime, at a time when most of the world is focused on stopping the coronavirus pandemic.

“During this critical time, we believe that it is very dangerous and irrational to detain journalists and block access to media, which are the eyes and ears of the people,” said the Myanmar Press Freedom Center, a media advocacy group in Yangon, Myanmar’s largest city.

Health experts, meanwhile, worry that the government is insufficiently focused on containing the coronavirus. The government has done little to prepare for the pandemic; it has conducted just 644 tests in a country of more than 50 million people, reporting only 20 cases.

The military, known as the Tatmadaw, is battling rebel ethnic groups on three fronts, but it has not proposed cease-fires during the pandemic. Myanmar has an elected civilian government, but the military is independent under the Constitution, which it drafted.

The authorities have repeatedly targeted journalists in recent years. Two reporters for the Reuters news agency were sentenced to seven years in prison in 2018 after they exposed a military massacre in the state of Rakhine. The two were later pardoned and released.

The governing party, the National League for Democracy, which is headed by the Nobel Peace laureate Daw Aung San Suu Kyi and won by a landslide in 2015, is heading into new elections this year with diminished support from many ethnic groups.

The Tatmadaw’s biggest military campaign is against the Arakan Army, a rebel ethnic group that is fighting to create an independent territory in Rakhine, along the lines of the ancient Arakan kingdom that was once there.

The Arakan Army, formed a decade ago, says it has 7,000 soldiers. It has killed hundreds of Myanmar troops and staged dozens of abductions, including a daring raid in October, when rebels dressed as soccer players ambushed a bus and seized 31 people.

Rakhine came to the world’s attention in 2017 with the brutal ethnic cleansing of Rohingya Muslims carried out by the Tatmadaw, including a campaign of murder, rape and the burning of villages. Since then, more than 700,000 Rohingya have fled across the border into Bangladesh, where they live in squalid refugee camps with little chance of returning.

Meanwhile, the Arakan Army has been waging war against the Tatmadaw in the same part of the country.

On March 23, Myanmar declared the Arakan Army to be a terrorist group. The government also ordered communications companies to block at least 220 websites. Most were said to be pornography sites, but the list also included media outlets that cover news in areas where ethnic conflicts have broken out, including Rakhine.

Myanmar’s director general of communication, U Myo Swe, said in an interview that media sites had been blocked to keep them from posting “fake news” about the coronavirus, or news that would contribute to instability in the country.

“In this time of the coronavirus pandemic, some websites are publishing fake news about the virus and it harms the public,” he said, without citing any examples. He declined to comment when asked whether the website closures were aimed at suppressing press freedom.

The government has blocked internet access since June in parts of Rakhine and the state of Chin where the Arakan Army operates, in what amounts to one of the longest internet shutdowns by any government in the world.

Mr. Nay Myo Lin, the Voice of Myanmar editor, was arrested on Monday on terrorism charges after posting an interview with the Arakan Army spokesman, U Khaing Thu Kha. Mr. Nay Myo Lin faces up to life in prison.

The next day, the police raided the office of Narinjara, a news outlet based in the Rakhine city of Sittwe, seeking to arrest its editor in chief, U Khaing Mrat Kyaw, who also had posted an interview with the rebel spokesman. Mr. Khaing was not at the office and is now said to be in hiding.

The police seized computers and detained three Narinjara journalists, who were released that evening.

“We are not committing a crime. We are doing our job,” said U Thant Myat Khaing, a reporter who was detained and interrogated. “When people are focusing on virus news, they are arresting journalists to shut down the information.”

Late Tuesday night, the police raided the homes of several editors at the media outlet Yangon Khit Thit Media, including the home of the editor in chief, U Thar Lon Zaung Htet, who published a similar interview with the rebel spokesman. Mr. Thar’s whereabouts was unknown Friday.

“Yangon Khit Thit Media reports news ethically and violates no terrorist law,” the outlet said in a statement after the raids. “This situation is unacceptable and threatens the Myanmar media.”

Phil Robertson, the deputy Asia director for Human Rights Watch, said it was distressing to see Myanmar roll back media freedoms while most of the world is preoccupied with battling the coronavirus.

“Myanmar’s military, and their accomplices in the civilian government, have realized the global Covid-19 crisis provides a golden opportunity to take care of repressive business while diplomats and the international media are distracted,” he said.