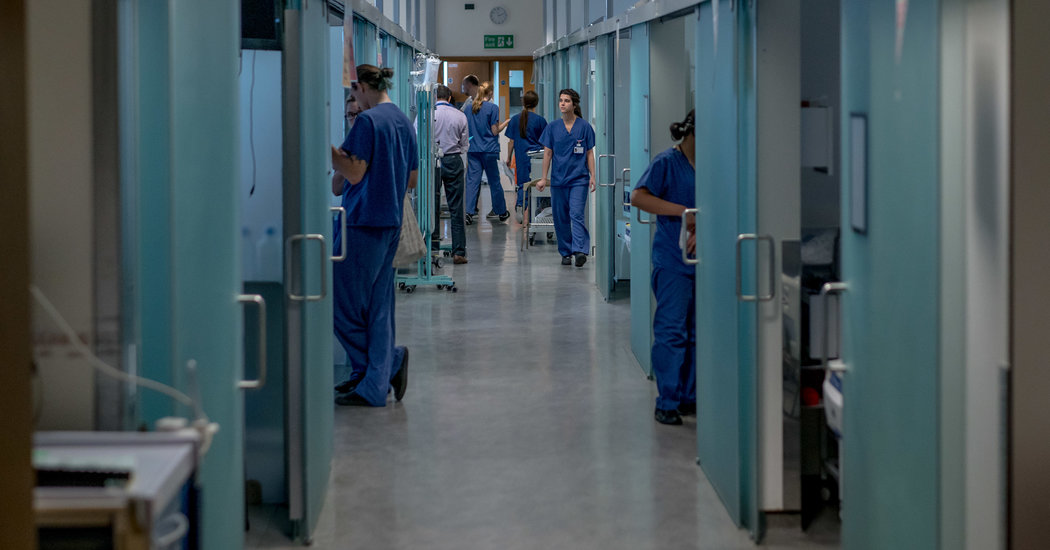 In expensive treatments for cancer and other diseases, the health service officially limits what it will spend to postpone a death: 30,000 pounds, or about $37,000, for each year of full “quality” life provided to a patient.

In the case of a pandemic, the public guidance from health officials for more than a decade has been that doctors should prepare to withhold scarce resources from the weakest patients in order to save more of the strong, especially with the use of life-sustaining ventilators.

Yet now that a pandemic has finally arrived, the health authorities this week balked at spelling out exactly how to make those agonizing choices, evidently for fear of a public uproar.

Barraged with criticism from all sides for its sluggish response to the threat, the government of Prime Minister Boris Johnson has elected to avoid the political pain of disclosing its already-drafted criteria for deciding which patients should be allowed to die of the disease — even those with some chance of survival.

The absence of official guidance could effectively force front-line doctors to improvise their own criteria, lawyers and ethicists say, potentially consigning poor, aging or disabled patients to the back of the line.

Doctors in Northern Italy have already reported withholding life-extending support from patients in order to devote scarce ventilators to those with better odds. Now other European governments and many American states are scrambling to craft similar triage policies in case their hospitals become overwhelmed.

Yet the British government has far more experience and expertise than American states in rationing treatments for medical problems, making its failure to spell out a policy especially striking.

“In the U.K., these are decisions by public bodies for which they are publicly accountable,” said David Lock, a lawyer who is advising the British Medical Association on legal and ethical issues. “Therefore, there is an urgent need for a clear framework for doctors to make these decisions on behalf of the public bodies that employ them.”

Without more careful guidelines, “really terrible decisions could be made,” said Peter Todd, a lawyer who has represented autistic patients who were denied medical treatment by the National Health Service.

Senior health officials took initial steps last week to develop such a triage policy, quietly commissioning a small committee of doctors and other experts to help set a specific protocol for access to ventilators, three people familiar with the effort said. The office of the chief medical officer had been expected to issue the guidelines by the end of last week.

After considering whether special panels in each hospital should make such decisions, the committee leaned toward setting a numerical formula ranking chances of survival, much like the calculations British doctors currently use to rank patients seeking liver transplants. Proponents argued that a numerical ranking could lift burdens from front-line doctors while reducing inconsistencies from one hospital to the next.

On Monday, however, for fear of sowing panic, health officials reversed themselves and decided to put off disclosing the effort at all, people familiar with the project say. Officials argued that the recently imposed policy of strict social distancing might slow the rate of infections enough to avoid the need for such triage.

Asked about the decisions first to draft and then pull back the triage criteria, representatives of the Department of Heath and Social Care sent an emailed statement: “As the public would expect, we do lots of work to prepare for a number of different scenarios so we are as prepared as possible.”

Despite official hopes of averting the darkest scenarios, though, doctors say the strains on the British health care system continue to build. Desperate efforts to produce more ventilators have so far failed to significantly expand the number available — currently fewer than 10,000 — and the numbers of those infected continue to climb.

British health officials said Friday that the number of hospital deaths in the previous 24 hours had reached a new high of 684, bringing the total to 3,605. The full extent of infection remained impossible to quantify, in part because testing materials were in such short supply.

The British authorities began issuing vague pandemic guidance more than a decade ago, telling health care providers to give preference to those most likely to benefit from access to limited resources like ventilators.

“Everyone matters equally, but this does not mean that everyone is treated the same,” the health department declared in ethical guidance formulated after the H1N1, or swine flu, pandemic in 2009.

“Even if existing critical care bed capacity can be maximally escalated, during the peak of a pandemic, there may be 10 times as many patients requiring mechanical ventilatory support as the number of beds available,” the health department estimated in pandemic flu guidance first issued in 2009.

“Additional security measures,” the same document warned, may be needed to protect doctors making triage decisions from the wrath of people whose friends or relatives were denied life-sustaining breathing support.

But such general guidance failed to address many of the most delicate questions, including how to decide which patients stand the best chance of survival.

Advocates for the aged warn that older but physically healthy patients may suffer unfairly if doctors use age as a stand-in for resilience, and that decision-making may vary from one hospital to another. Diabetes, heart disease, obesity or other health risks might all be counted differently.

Ethicists warn that the poor would probably suffer disproportionately because they are more likely to have pre-existing health problems. Without specific guidelines, they say, the decisions of doctors may be influenced by unconscious bias against ethnic minorities, people with mental disabilities and other groups.

In the absence of guidelines from Britain’s top health officials, the same body that applies the £30,000 cap on new treatments —- the official National Institute for Health and Care and Excellence, usually referred to by the acronym N.I.C.E. — sought to step in. Last week N.I.C.E. advised doctors to prioritize ventilator access in part by consulting a numerical score known as a Clinical Frailty Rating.

But the frailty rating is a measure of physical activity and general self-sufficiency that was designed to evaluate only seniors, not the broader population. Lawyers representing people with autism and other disabilities quickly complained, and N.I.C.E. amended its guidance to specifically rule out any application to younger people or those with learning disabilities or long-term disabilities, though patient advocates argued the changes were insufficient.

Then this week the British Medical Association, the main doctors trade group, issued its own general guidelines, arguing that its members and other health care providers should be given special priority. That way they might return to caring for others, the association reasoned.

“Decisions about which groups will have first call on scarce resources may also need to take account of the need to maintain essential services,” the medical association said. That should include, it said, “those individuals involved in tackling the immediate health and social care aspects of the pandemic, and particularly those with scarce and irreplaceable skills.”

The association also said that health care providers should prepare not only to withhold life-sustaining treatment but also to actively withdraw it in order to transfer it to others — even when withdrawal might hasten the death of a patient who had been improving.

Even if the patient is “stable or even improving,” the association said, a ventilator could be withdrawn if “objective assessment indicated a worse prognosis than another patient who requires the same resource.”

Some legal experts, though, argued that patients facing the withholding or withdrawal of respiratory support deserved at least a day in court. British courts should have a chance to rule on triage policies in a test case before they are applied more broadly, said Kathleen Liddell, director of the Cambridge Center for Law, Medicine and Life Science.

“This maxim that we should be saving the most number of lives is not complete,” she said. “It has to be while respecting the human rights of the patient.”

Some British doctors are already seeking to reassure frail patients that they will not be left for dead, even if efforts to save them can only go so far.

If treatment becomes futile, “we will change our focus from cure but most importantly we will continue to care,” Dr. Matthew Morgan, an intensive care doctor in Wales, wrote in an open letter to vulnerable patients published last month in the BMJ, a British medical journal. “We have not forgotten about you.”