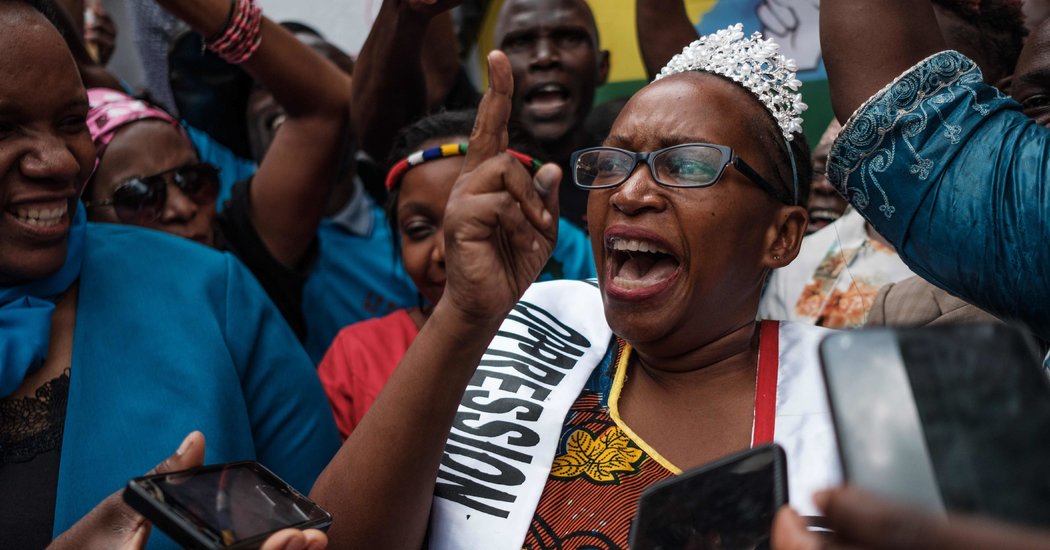 It was a cool mid-March afternoon, three weeks after Ms. Nyanzi, a Ugandan scholar and feminist, was released from prison for insulting the country’s longtime president, Yoweri Museveni. Before her was an array of political activists and community organizers, many of whom had traveled long distances to celebrate her newfound freedom at a hotel in Kampala, the capital.

“Thank you for loving me,” she said, drying her tears. “To love me is to invite hate. Some of us have been hated so much that we don’t know how to do love.”

But Ms. Nyanzi, who speaks with a ringing, authoritative voice, quickly got back to her remarks, urging activists to build movements and develop campaigns that would help marginalized members of society.

“We can laugh when we are liberated from Museveni,” she said of the 75-year-old president, once the darling of Western democracy advocates whose rule has devolved into outright dictatorship.

“Please be bad for the sake of the cause,” she exhorted the activists, and with an impish grin added, “And don’t get caught while being bad.”

Ms. Nyanzi, 45, has in recent years become one of the most potent foes of Mr. Museveni, who has governed the East African nation for 34 years. With over 212,000 followers on Facebook, Ms. Nyanzi mixes profanity and bawdy humor with razor-sharp political insights in both English and Luganda to taunt the president and his family and agitate for sociopolitical and economic change.

In a country where freely expressing opinions is a risky endeavor, her denunciations have put her in the sights of the government’s security apparatus.

But she has never been the shrinking violet sort.

In 2016, when Ms. Nyanzi was suspended from her teaching post at Makerere University, the country’s largest and most prestigious university, she stripped naked and chained herself in her office in protest. In 2017, she was detained for over a month after calling Mr. Museveni “a pair of buttocks” in a Facebook post. Officials tried to commit her to a mental hospital.

In 2018, she was arrested and charged with cyberharassment after writing a poem about the president’s mother’s vagina, leading to an 18-month jail sentence last August. While attending the verdict via video link, Ms. Nyanzi screamed obscenities at the court and bared her breasts in protest.

But after a court quashed that sentence in late February, Ms. Nyanzi said she came out more determined than ever to skewer the president and his allies — and risk going back to prison.

“I refuse to be repentant,” she said in an interview one recent morning at her home in Kampala.

Images of her three children — a daughter, Baraka, 15, and twin sons, Wasswa and Kato, 12 — hang next to shelves filled with books on sexuality, gender studies and self-improvement, along with parliamentary reports dating to the 1980s. She and the children’s father, Ousman Bah, separated 13 years ago.

Ms. Nyanzi says she’s not preoccupied with Mr. Museveni himself, but is “obsessed with the abuser of the seat of the president; he is the liberator who is now an oppressor.”

When he captured power in 1986, Mr. Museveni promised “a fundamental change in the politics of our government” and an end to years of lawlessness, political strife and human rights abuses. But his critics accuse him of overseeing a government with high levels of corruption, expanding digital surveillance powers and refusing to address growing unemployment and poverty.

Citizens, exasperated by the country’s direction, have increasingly taken to the streets in recent years, protesting escalating food and fuel prices, anti-gay legislation, tuition increases and the failure of the police to investigate violence against women.

Ms. Nyanzi has not only helped to organize and lead some of these protests; she’s also written about them in academic journals and on social media platforms, the latter in her characteristically sardonic style.

The eldest of four sisters, Ms. Nyanzi was born in the town of Jinja in southeastern Uganda, where her father worked as a doctor and her mother was a social worker. (She also has eight half-siblings from her father.) A trained medical anthropologist with degrees from Makerere University, University College London and the London School of Hygiene and Tropical Medicine, she said she was always aware of her relatively privileged upbringing.

“I know what it means to have,” she says, “but I refuse to be guilty about privilege because you can use it to help others.”

As a medical anthropologist, Ms. Nyanzi has delved into a wide range of issues, including the negotiation of sexual relationships among Ugandan students, the impact of H.I.V. and AIDS on rural communities and homosexuality in Africa.

But she has a public, nonacademic side, trying to break down complex ideas into what she calls “chewable posts” on Facebook, covering cultural and health issues, as well as topics on sexuality, gender, law and politics.

“Social media is very elitist,” she said. “By using it, I know we are excluding a huge majority of the population” But it scares the powerful, she said, mentioning a controversial social media tax that the authorities introduced in 2018 and that has depressed usage.

Lacing her messages online with invective and sexual metaphors helps her to reach a large number of people, Ms. Nyanzi says. In a recently published collection of poems written behind bars and titled “No Roses From My Mouth,” she compares jail to sexual intercourse, concluding neither “lasts forever.”

Her writings have predictably drawn criticism from the country’s more conservative elements, but also from fellow activists, who believe her antics detract from their message.

“You can oppose Mr. Museveni while also remaining civil and respectful,” a journalist, Musaazi Namiti, wrote recently. “Obscene expletives and shocking sexual imagery dumped on social media in the name of opposing a power-hungry president are not alternative policies. They cannot propel Uganda forward.”

In the face of such criticism, Ms. Nyanzi remains, as she said, unrepentant.

“They say I am reckless; they want me to silence myself, to edit my rudeness,” she said. “I am an academic, not a politician. I want the issues flagged out there, and if I lose a few supporters in the process, then perhaps the issues are much more important.”

Out of prison now, Ms. Nyanzi is spending more time with her three children, taking them to the zoo and poetry readings, where fans applaud when she walks in and ask for selfies and autographs.

While her children understand her drive and cause — they help make placards for her protests — she says she knows her absence takes a toll on them.

“They sometimes ask me, ‘Mom, why do you love Uganda more than us?’” she said on a recent drive while one of her twin boys sat in the car. “I want to be there for them. I want to have an input on their lives. I hope they forgive me.”

Ms. Nyanzi is also spending time with her partner, David Musiri, an activist who is also the father of the baby she miscarried in prison. The two met in 2018 while protesting in front of Police Headquarters to get clearance for a march demanding government action against a spate of kidnappings and murders of women in Kampala.

“I immediately fell in love with him,” she said.

On a quiet Sunday in March, she and Mr. Musiri visited the grave of his adopted father, who died last year while Ms. Nyanzi was still in detention. After giving her respects, she said she was determined to work hard and lay the groundwork that will see Mr. Museveni go before or after she dies. She’s also mulling a run for office as Uganda’s 2021 elections draw closer.

“The suppression will continue,” she said. “I know I will go back to prison. They will handcuff my body but not my spirit.”