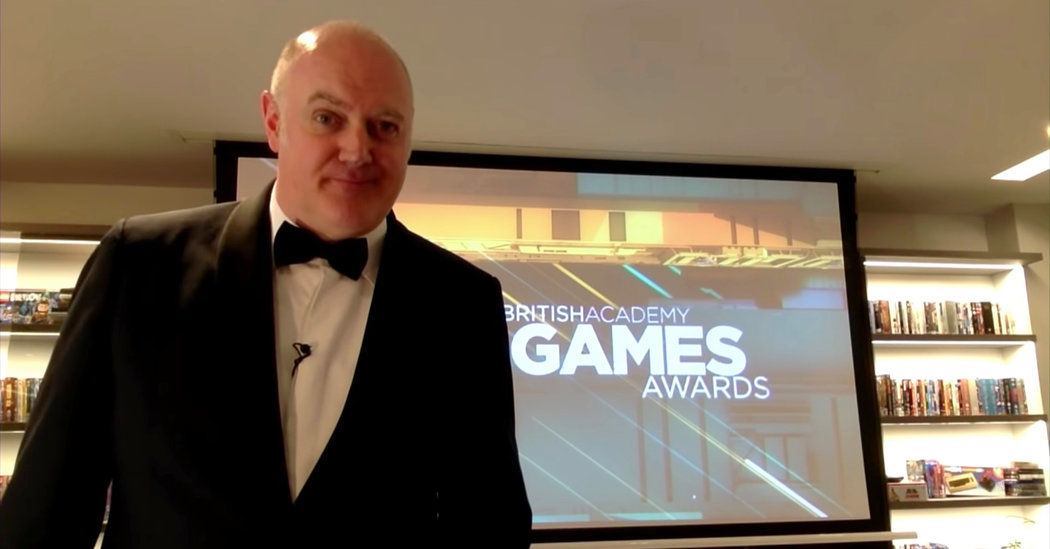 LONDON — Dara O’Briain, an Irish comedian, appeared in a tuxedo on a YouTube live stream on Thursday night and announced the start of the 2020 BAFTA Games Awards, celebrating the best video games of the past year.

“I’ve hosted these awards many times before,” O’Briain said, “usually from some plush concert hall in the middle of London.”

“Not tonight!” he added, with a smile. “Tonight, these awards in their entirety will take place in the room in my house with a big telly in which I play video games.”

O’Briain then warned that his cat might wander into the shot “every so often.”

The coronavirus pandemic has led to a host of the world’s biggest award ceremonies being postponed or canceled, with rules on social distancing making it impossible to gather several hundred nominees and guests in a room.

“I think it was in the first conversation, I said, ‘Wait, why don’t you just send over the awards logo and I’ll stick it on a screen behind me,’” he recalled in a telephone interview. “I mean, bar a dais, that’s essentially what an awards show looks like.”

An idea was quickly developed in which O’Briain would record his segments from home, as if they were happening live. Separately, nominees would record acceptance speeches. The British Academy would then stitch the ceremony together and broadcast it as if live. Nobody — including O’Briain — would know who had won awards until the broadcast.

The unusual arrangements weren’t hidden, though. When O’Briain announced the biggest prize of the night — best game, which went to Outer Wilds, in which players try to save a solar system from destruction — the feed cut back to O’Briain.

O’Briain recorded all his segments one night last month after his children had gone to bed, he said, going down to the spare room in his London home and setting up a laptop to project the award logo on the screen behind him. He then set up another laptop on a kitchen stool and a pile of books to record himself. It looked “pretty bad” at first, he added, so he used two desk lamps to improve the lighting.

“It took about five hours to do the bloody thing,” he said. “There are vloggers who do this all the time,” he added. “I was like some analog comedian from the ’50s trying to do it in a tuxedo.”

There was an “after show party,” he added: It involved him transferring all the recordings to BAFTA via a file-sharing website.

It was important the awards went ahead, O’Briain said, to recognize the efforts and achievements of people in the industry through the year. But video-game awards could also provide a huge lift during the lockdown, and recommendations about the best games could be really useful for fans, he added.

In a Zoom interview, Helen Hindpere and Aleksander Rostov — two of the team behind Disco Elysium, a game in which players take the role of an amnesiac police officer trying to solve a murder, which was nominated for seven awards — said the experience of recording red carpet interviews and acceptance speeches in advance was bizarre but welcome.

“I hadn’t seen anyone in days,” Hindpere said of the day that she recorded multiple speeches using the Zoom app. “It was definitely a surreal experience as we all dressed up, the guys wearing their tuxedos, and I was actually wearing my high heels,” she added.

The games industry had little problem moving to an online awards show, because most ceremonies are streamed for fans already, Rostov said. But he said he hoped that the unusual format would not be permanent. “Ceremonies are important,” he said. “It’s important for people to get together in the same space to do our weird modern versions of shamanic rituals.”

On Thursday night, the awards may have had a homemade feel, but they flew by without a hitch. O’Briain made a series of jokes related to the pandemic. “Yes, I am drinking,” he said at one point while holding a pint of cider. “I’m in my own house!” And most acceptance speeches contained a message to fans to “stay safe.”

Hindpere and Rostov appeared onscreen several times, as Disco Elysium took three prizes, including best debut game and best music. For the music award, members of the band British Sea Power, who wrote the game’s soundtrack, gave an acceptance speech from the Scottish island of Skye, surrounded by sheep.

The ceremony even contained one genuinely touching moment when O’Briain addressed the several hundred thousand gamers watching live and called on them to introduce games to those struggling to cope with being locked down in the pandemic.

“You’re the experts here,” he said. “Draw them into this world and show them the joy and the human contact that can be got in a virtual world.”

“Because for the time being,” he added, “that’s what we’ll have to rely on.”