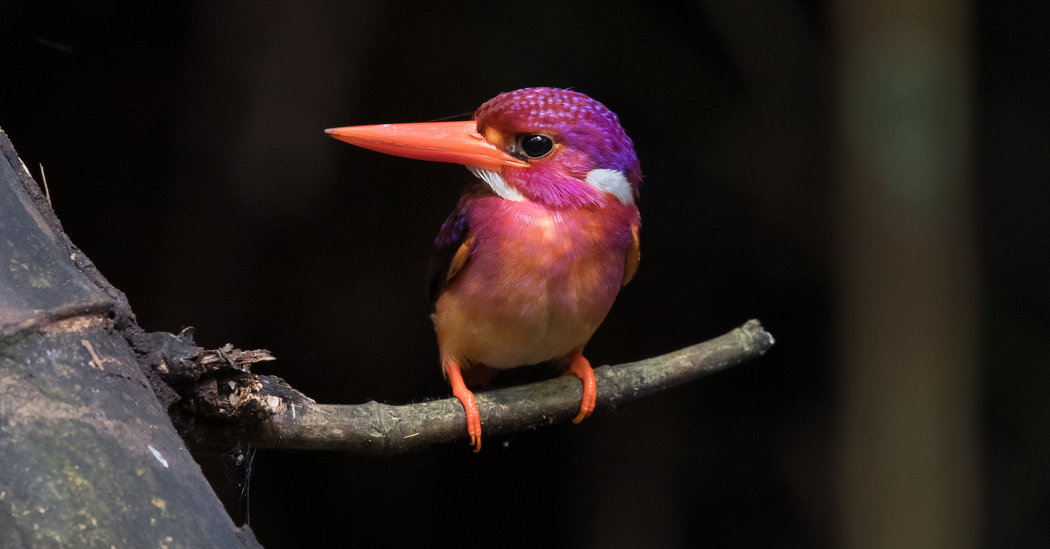 On March 11, Dr. Miguel David De Leon — a vitreoretinal surgeon in Mindanao, the southern island of the Philippines — worked a full morning at the medical center. When he got home, “I was exhausted,” he said. But he pulled it together, lugged his camera an hour uphill and clambered into his bird hide.

Soon his prize appeared: a fledgling South Philippine dwarf kingfisher, about three weeks old. For 10 minutes the rare bird posed on a branch, showing off its pastel coloring and unusual black bill. “I was so, so thrilled,” said Dr. De Leon, who had chased this shot for over three years. “I felt like my chest would explode.”

The Philippines is filled with birds that can be found only in its forests — at least 255 species are unique to the country. But very little is known about most of them, including the South Philippine dwarf kingfisher. Dr. De Leon’s photograph is the first known to be taken of a fledgling.

His birding group, the Robert S. Kennedy Bird Conservancy, specializes in such photos. The group’s work tends to be both research- and Instagram-worthy, filling gaps in scientific knowledge while showing off the country’s biodiversity.

Dr. De Leon started his group, which is named for the author of the region’s main bird guide, in 2017. None of its eight members are professional ornithologists — others include an artist, a military strategist and two pilots. But they are very, very patient.

“Foreign researchers and scientists don’t stay here in the Philippines long,” Dr. De Leon said. His group instead does stakeouts: long days in bird hides, which they construct from bamboo, palm fronds and banana leaves.

They build the hides over the course of a few days, usually near nests. They then do their best to stay in them from sunrise to sunset, to avoid disturbing wary bird parents.

“If there’s any alteration in the behavior of the birds, then we stop,” said Dr. De Leon.

With these strategies, they can learn things that might otherwise require more disruptive methods, Dr. De Leon said. In 2017, for example, he and a few others published a paper detailing the South Philippine dwarf kingfisher’s dietary habits, which they pieced together over years of watching parents bring food back to the nest. (They eat a lot of skinks, and no fish.)

This took extra dedication, as the South Philippine dwarf kingfisher is particularly hard to spot. “It perches quietly and darts invisibly from perch to perch,” Dr. Kennedy’s bird guide warns.

And as Dr. De Leon’s group soon found, the fledgling is even sneakier. While birds of other species often stay close to their nests while learning to fly, the young kingfishers rocket away. “Even if we’re watching them closely, they just disappear,” he said.

He hopes his hard-won photos of the young bird will help researchers learn more about the species’ plumage development, which could help them judge the age of birds in the field. Plus, he said, “many Filipinos didn’t realize we even have this rare kingfisher.” His images, which have been popular on social media, help spread the word, which in turn aids conservation efforts.

The group has been slowly staking out about a dozen other rarely seen birds, and hopes to release more images and research over the next few years.

“There is just so much to know about Philippine birds,” Dr. De Leon said. “Way too much for even a lifetime.”