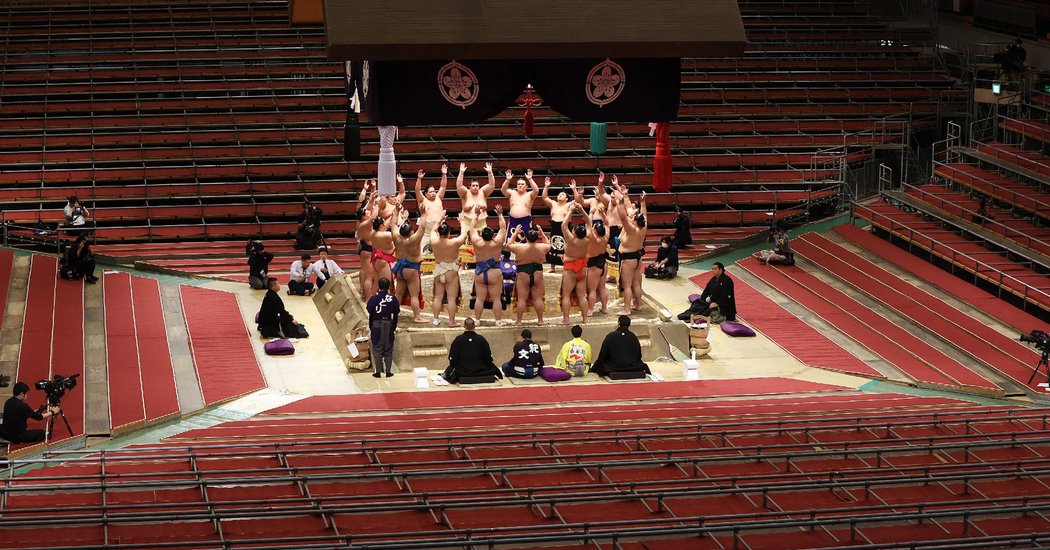 As the host of the 2020, we mean the 2021, Summer Games, Japan has drawn an outsize share of attention during the coronavirus pandemic. While it did shut down some events as early as February, and closed schools in March, it was slower to adopt some other mitigation efforts like working from home and social distancing, in part because its infection rates seemed low.

But after the Olympics were postponed a year by the International Olympic Committee, Japan seemed to begin to catch up with many other countries. But in sports, it is still sometimes taking half-measures.

The most recent elite sumo tournament, or basho, was held as scheduled March 10-22 in Osaka, although without spectators and without the traditional offering of a ladle of water from a winning wrestler to the next one up. (The winner of the basho was Hakuho, who collected his record 44th win.)

On Friday, the May and July tournaments were postponed, but only by two weeks. That delay, at least in the case of the May basho, seems unlikely to push the event into a safe period.

Sumo is Japan’s national sport, and the elite tournaments have been held six times a year uninterrupted since 1958. At least one basho has been held every year since 1909, including during World War II and the Allied occupation.

President Trump attended the May tournament last year and presented a trophy inside the ring, where women are not permitted.

Perhaps optimistically, Japan’s top baseball league had been planning to return on April 24 and the top soccer league on May 9. On Friday, both said they would postpone even further, probably until at least the end of May.

Too Fast, Too Furious: Zwift

Thomas De Gendt was just trying to play on Zwift, the game in which players on stationary bicycles can roll around or race in virtual worlds.

Then he was suddenly reduced to a lower speed. The reason? He was going so fast that the game suspected that his device was faulty, or perhaps that he was cheating.

But maybe his high rate of speed was not so surprising. De Gendt is a professional cyclist from Belgium who has won two stages of the Tour de France.

“On a climb, I just had the numbers ​​that I more or less push in a race,” he told Het Nieuwsblad, a Belgian newspaper. “Suddenly I was blocked and neutralized by the game.”

He added: “The numbers weren’t so special, though. For a while, 500 to 550 watts. As a cycling tourist, it may be unrealistically high, but for us as pros it is more or less normal if you want to win a race.”

So the next time you get walloped in a sports video game, just tell your friends a true professional beat you. Surely.

The Sum Total of Sporting Events

International sports score services like FlashScore are typically stuffed full of results in dozens of sports in hundreds of countries, especially on a weekend.

So looking at FlashScore for this Saturday is a forlorn experience. What follows is the sum total of sporting events being held on our planet:

Soccer from Belarus, Nicaragua and Burundi, which seem to be the three countries left playing league competition, plus a couple of Swedish friendlies.

And a decent range of e-sports, which of course are especially well-suited to social distancing.

And that’s everything. Half the world is on lockdown, but for sports, it’s more like 99 percent.