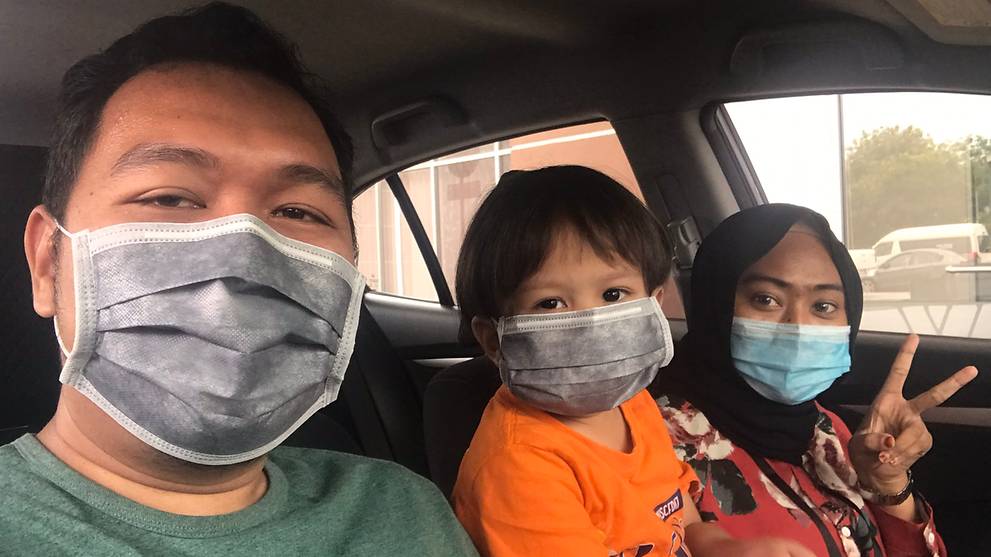 KUALA LUMPUR: As Mr Zulafandi Haris was ushered out of his flat into an ambulance by health officers wearing face masks, visors and gloves, his toddler son stood at the door watching.

The 30-year-old man had tested positive for COVID-19. His wife, Mdm Farah Salwani, who was three-months pregnant, was already warded in hospital after she was confirmed positive three days before.

Mr Zulafandi could see tears running down the 3-year-old’s cheeks, but he could not hug or kiss him goodbye. He could not even touch the boy.

“He asked me: ‘Daddy can I come along?’ I told him he couldn’t and that made my heart ache,” recounted Mr Zulafandi in a phone interview with CNA.

In what he described as one of the most heartbreaking moments in his life, he shed tears while he sat in the ambulance to go to Hospital Kuala Lumpur (HKL).

With the couple taken ill, they had to leave their son under the care of Mdm Farah’s sister. He did not know if or when they would see each other again.

“I was in tears because we don’t usually separate or live apart,” said the insurance agent. “Even if I have to travel for work, I will bring my family along. But we are thankful it’s all behind us now.”

Mr Zulafandi was warded at HKL for 12 days, from Mar 9 until Mar 20. Both he and his wife have made full recovery and the family has since been reunited.

The couple are among more than 750 people who have fully recovered from COVID-19 in Malaysia. As of Friday (Apr 3), the country reported more than 3,300 cases in total and 53 deaths.

Mr Zulafandi told CNA that the days they spent isolated from one another was a distressing experience. “(It) seemed to drag on forever,” he said.

Their ordeal started in early March when Mdm Farah had a high fever. She had been in contact with another positive case, and was asked to go for a drive-through test for COVID-19.

She later tested positive and was taken to the hospital from her home by ambulance.

Mr Zulafandi and Umar, the toddler, were later tested while they were at home. Only the father was positive.

“I was most relieved that my son tested negative, that was most important for me. Can you imagine if he was positive? We would have to be kept apart. Who was going to care for him? That would have been a nightmare,” he said.

SEPARATION ANXIETY WHILE IN HOSPITAL

Although Mr Zulafandi was tested positive, he did not have any symptoms throughout.

“I was positive (for COVID-19) but I was never sick, not even sore throat. The doctors said that can happen, but they treated me as a potential carrier and I had to be isolated from the public,” he said.

However, he was anxious for his wife and their unborn child.

Luckily for Mr Zulafandi, he was warded in a room next to his wife. They were not able to meet face to face, but he said it was comforting to know they were close by.

“Every time I saw the doctors, I would ask them what was her condition before asking about my own. I needed to stay updated and if her condition worsened, I wanted to know,” he recounted.

Mr Zulafandi described his hospital stay as a waiting game. He could contact his family through video calls, but he eventually stopped himself from contacting his son because he would get emotional.

“When we did speak, he would ask me things like ‘Daddy, when are you coming home?’ I tried to explain by saying ‘Daddy needs to see the doctor, cannot come home yet.’ but he would still be sad”.

To take his mind off his family, Mr Zulafandi would talk to his roommates, three other men who also tested positive for COVID-19.

The three of them were colleagues from work, but Mr Zulafandi made friends with them easily although he did not know them prior to this.

“We would talk, play games, anything to distract us from the reality that there was a virus inside our bodies. We shared a lot about our lives and promised to keep in touch after we were discharged,” he added.

READ: ‘If not us, then who?’: Malaysian doctors overcome fear of infection in country’s battle against COVID-19

After being treated in hospital, Mr Zulafandi said he developed a newfound respect for doctors and healthcare professionals on the frontline.

“We were just sitting on our beds in an air-conditioned room but they were working so hard, sweating in the PPE (personal protective equipment). They were clearly uncomfortable but still managed to do their jobs professionally,” he said.

When his family was reunited on Mar 20, Mr Zulafandi said he had never felt so relieved. They still had to be quarantined at home for 14 days, as per the Health Ministry’s protocol.

However, the challenges did not end there. Mr Zulafandi noticed that his neighbours were initially apprehensive towards his family. He recalled how some of them were wary about approaching and talking to them.

He noted that they probably felt afraid of contracting the virus and did not understand that he and his wife were discharged because they have been tested negative.

“When the ambulance came to take me to the hospital, the whole block became chaotic. They were scared that they would be infected by living close to us,” said Mr Zulafandi.

“It turned out that we were the only ones in the area to test positive. I can understand why they were scared, and they were still careful around us when we came home” he added.

He and his wife took the time to explain that they were fully recovered. He told those around them that they would be fine if everyone followed precautions laid out by the Health Ministry.

“Many of them who were reluctant at first came forward to help us, by buying groceries and talking to us about our experience in the hospital. We are thankful,” he added.

Although his family’s overall experience was challenging at times, Mr Zulfandi prefers to see the silver lining, especially in terms of how closer ties were forged during the period.

He narrated his hospital experience on a Twitter thread, with photos and videos at different junctures of the journey.

“I want to thank the netizens who read and posted encouraging comments. All of them were supportive and the positivity is something we need to celebrate during these tough times,” he told CNA.