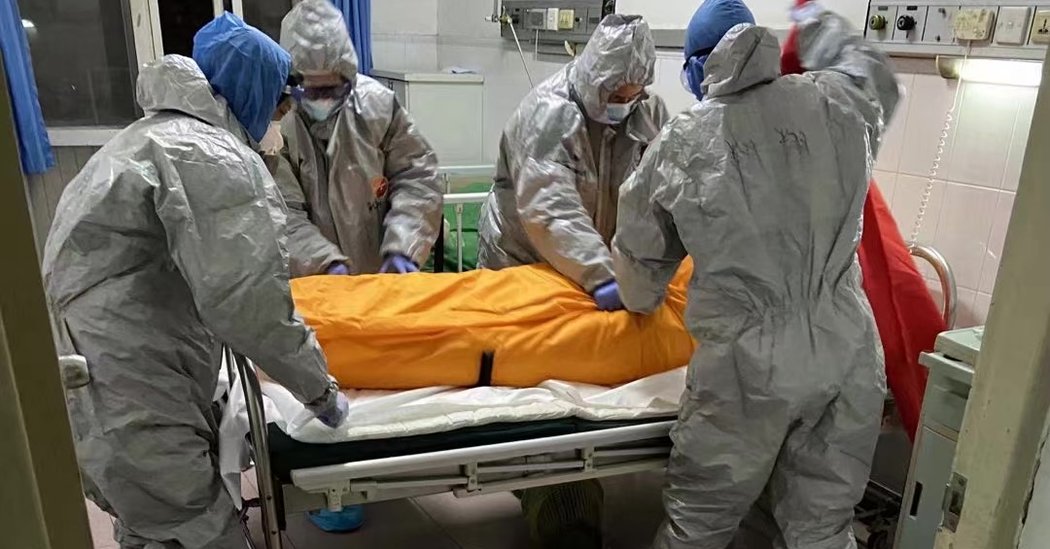 Liu Pei’en held the small wooden box that contained his father’s remains. Only two months ago, he had helplessly clutched his father’s frail hand as the elderly man took his last breath, and the pain was still raw. He wept.

But there was little time, or space, for Mr. Liu to grieve. He said officials in the central Chinese city of Wuhan had insisted on accompanying him to the funeral home and were waiting anxiously nearby. Later, they followed him to the cemetery where they watched him bury his father, he said. Mr. Liu saw one of his minders taking photos of the funeral, which was over in 20 minutes.

“My father devoted his whole life to serving the country and the party,” Mr. Liu, 44, who works in finance, said by phone. “Only to be surveilled after his death.”

For months, the residents of Wuhan had been told they could not pick up the ashes of their loved ones who had died during the height of China’s coronavirus outbreak. Now that the authorities say the epidemic is under control, officials are pushing the relatives to bury the dead quickly and quietly, and they are suppressing online discussion of fatalities as doubts emerge about the true size of the toll.

China’s official death toll from the coronavirus stood at 3,322 on Friday, but medical workers and others have suggested the count should be higher. The C.I.A. has warned the White House for weeks that China vastly understated its epidemic, current and former American intelligence officials say.

As China tries to control the narrative, the police in Wuhan, where the pandemic began, have been dispatched to break up groups on WeChat, a popular messaging app, set up by the relatives of coronavirus victims. Government censors have scrubbed images circulating on social media showing relatives in the city lining up at funeral homes to collect ashes. Officials have assigned minders to relatives like Mr. Liu, to follow them as they pick burial plots, claim their loved ones’ remains and bury them, grieving family members say.

The ruling Communist Party says it is trying to prevent large gatherings from causing a new outbreak. But its tight controls appear to be part of a concerted attempt to avoid an outpouring of anguish and anger that could be a visceral reminder of its early missteps and efforts to conceal the outbreak. Those same public displays or discussions of loss could also feed skepticism over how China has counted the dead.

Wuhan accounted for nearly two-thirds of China’s total infections and more than three-quarters of its deaths. But in the early weeks of the outbreak, medical workers said many deaths from the coronavirus weren’t counted because of a shortage of test kits.

More recently, a truck driver cited in a report by Caixin, an influential newsmagazine, talked about dropping off thousands of boxes for storing ashes at Hankou Funeral Home, one of eight funeral homes in the city. While the numbers raised doubts about the death toll, it was unclear whether the boxes were used for just coronavirus victims or more broadly.

The Chinese government says it has been open and transparent about the scale of the outbreak within its borders. But the party also wants to closely orchestrate how the epidemic’s victims should be mourned and remembered. It is portraying them as martyrs and compatriots who gave their lives in the fight against the spread of the disease, rather than victims of an outbreak.

The government said it would hold a nationwide moment of silence on Saturday, the day of the annual Tomb Sweeping Festival, a time for honoring ancestors. Activities will stop, flags will fly at half-staff, and alarms and horns will be sounded for three minutes starting at 10 a.m.

The moment of silence will probably not be enough to soothe many families in Wuhan who have chafed against the state’s efforts to assert control over the grieving process.

Some have demanded justice and accountability from the government, hoping that their loved ones did not die in vain. The government fired two top local officials in February, presumably over the bungling of the initial response, but it has not said if it would conduct further investigations.

“I demand an explanation,” said Zhang Hai, a 50-year-old native of Wuhan whose father, Zhang Lifa, died after he was infected with the coronavirus in a hospital. He wants to know why it took officials weeks to inform the public that the virus could spread among humans. “Otherwise, I can’t give my father closure and I will never be at peace.”

Other residents have tried to find their own way to privately memorialize their loved ones with small, makeshift acts of remembrance.

Maria Ma, a 23-year-old design teacher at a college in Wuhan, knew that her grandfather would have wanted the family to hold a wake for him in a large tent in which relatives could keep vigil and friends could burn incense.

But when he and Ms. Ma’s grandmother died in January, his wish couldn’t be met. Instead, their bodies were quickly taken away and cremated.

With Wuhan under lockdown, Ms. Ma and her family had no choice but to make do with simple rituals at home. They burned “spirit money,” wads of paper printed to look like currency, following the custom of ensuring that loved ones have enough to spend in the afterlife. On the 49th day after her grandfather’s death, the men in Ms. Ma’s family cut their hair, also in line with tradition.

Still, she said, the family was racked with guilt over not being able to organize a proper funeral.

“We keep asking ourselves, ‘How could this have happened to our family?’” Ms. Ma said by phone. “We are just ordinary people. We never did anything bad to anyone.”

In recent days, as the official number of new cases in China has dwindled, the authorities in Wuhan have turned to dealing with deaths. Officials have paid families about $420 for each relative who died during the epidemic, regardless of the cause. Relatives of coronavirus victims are also entitled to a 30 percent discount on burial plots and free cremation services.

Some, like Peng Bangwen, are finding that the monetary support doesn’t address the stigma of the virus that extends even after death.

Mr. Peng wants to bury his father, Peng Andong, who died in early February, in the family’s ancestral home outside of Wuhan. But village officials rejected the idea, saying they didn’t want the remains of a coronavirus patient there.

“Whether it’s with a quiet and peaceful funeral, or a grand and ornate funeral, I just want to have it taken care of,” Mr. Peng, 32, who works at a hotel in Wuhan, said by phone. “Otherwise it is too cruel, both for me and for him.”

Others, like Mr. Liu, the finance worker who buried his father, are struggling to come to terms with their loss.

His father, Liu Ouqing, was a respected member of the Communist Party who had led a distinguished life as a civil servant and college administrator and had started enjoying retirement only in recent years. The father and son had grown closer, and the elder Mr. Liu doted on his 11-year-old granddaughter.

In January, the elder Mr. Liu had gone to a hospital in Wuhan for a regular checkup. There, he became infected with the coronavirus.

His son, who had sneaked into the hospital by pretending to be a patient, said Mr. Liu fought valiantly but knew his end was near. His father told him to look in the bedside drawer, where he had kept notes on his finances and recipes for his granddaughter’s favorite dishes.

Mr. Liu, devastated, sought out a Buddhist priest, who conducted a ritual in a temple to monitor the state of his father’s soul. On some nights, Mr. Liu quietly read Buddhist prayers for his father.

Late last month, he received a call from the authorities notifying him to prepare for the burial.

Mr. Liu was assigned two officials, one from his father’s workplace and the other a local neighborhood worker, who said they were there to provide support. Last week, they went with him to Biandanshan Cemetery, in the city’s southwest. He chose the most expensive option, a south-facing plot that had mountains behind it and a lake below. It cost $14,000.

They held the funeral two days later. A label had been affixed to his father’s blank headstone noting the grave’s location: Row 24, Number 19. The tombstone would come later.

“Like a house without a door,” Mr. Liu said. With a marker, he wrote his father’s name at the top of the headstone.

When the burial was over, the officials asked the family to sign a form indicating that they had completed their assignment.

Two days later, Mr. Liu returned to the cemetery. This time, he went alone and spent an hour at his father’s grave. “Wait for me and Mom,” he told his father. “One day we will all live together in your new home.”

Mr. Liu said he would not stop pressing the government to punish the local officials responsible for initially concealing the outbreak and to provide fair compensation to the families of the victims.

“They think that I’ll go away now just because I’ve completed the burial?” he said. “No. I’m not finished yet.”