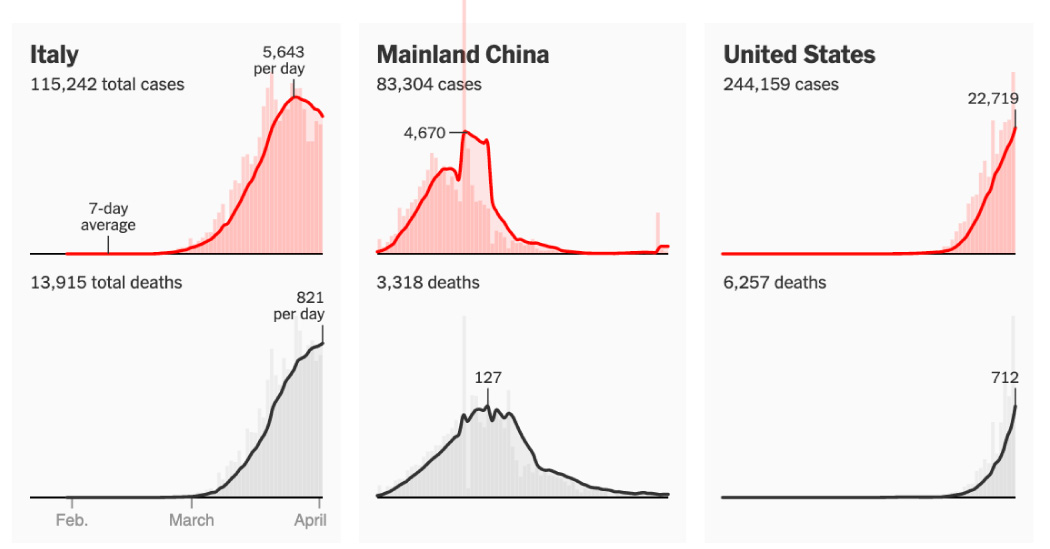 The trajectory of the coronavirus pandemic varies widely from country to country. The number of new cases each day appear to be falling in some nations — what’s known as flattening the curve.

Note: The number of cases in China had a big jump in mid-February because officials changed the way cases were counted.

Take Italy, for example, where the number of new cases appears to be leveling off, most likely because of the country’s strict lockdown efforts. But the death toll continues to climb, and health officials say the country has not yet reached its peak.

China, where the pandemic began, appears to have drastically reduced both the number of new cases and new deaths. But it’s possible that the country is vastly understating its coronavirus totals.

And in the United States, the number of new confirmed cases is still multiplying rapidly, as some states continue to resist the most stringent measures.

The charts on this page show the number of new confirmed cases and new deaths each day, based on official accounts collected by The New York Times and Johns Hopkins University. Each line is the seven-day moving average, which smooths out day-to-day anomalies in how the data are reported by authorities.

The charts are not without limitations. Each country may have different reporting guidelines, which makes precise comparison among countries difficult. Some countries may be less proactive about testing or reach a limit in their ability to test, which could cause their numbers to be understated.

Still, these charts provide a way to measure the overall trajectory of the coronavirus in each country and give insight into which ones are far from controlling the virus.

All of these countries below have seen an average of more than 2,000 cases per day in the past week, and most of them are not showing any signs of a slowdown.

The rest of these countries have seen a lower number of new cases, though many are far from flattening their curve. After initially managing to keep their numbers lower, some Asian countries, like Taiwan and Singapore, have seen recent spikes. The countries here are sorted by the average number of new cases in the past week. Scales are adjusted in each country to make the curve more readable.