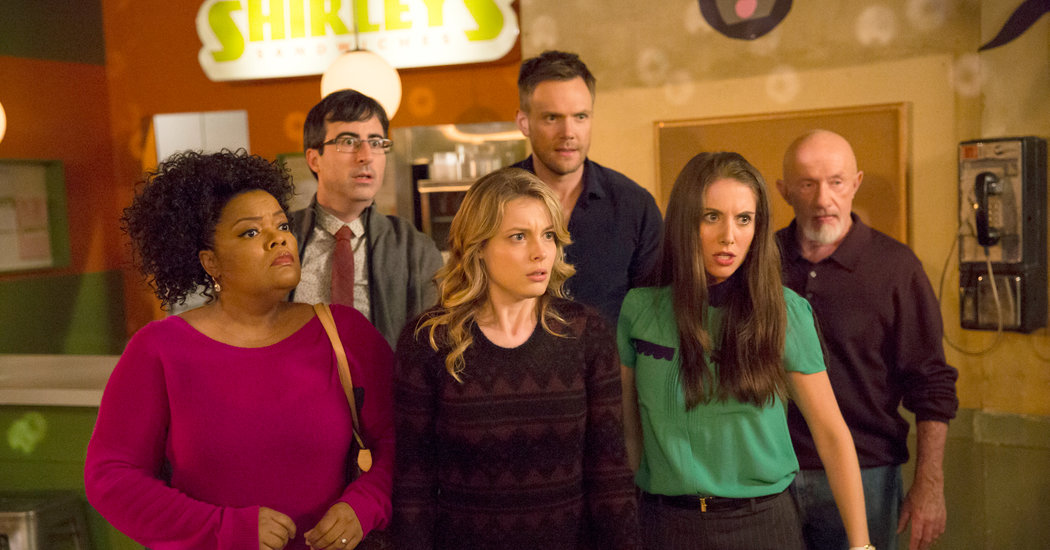 Every month, streaming services in Australia add a new batch of movies and TV shows to its library. Here are our picks for April.

“Community” debuted in 2009 as a well-written, well-acted, fairly conventional ensemble comedy, about a group of grown-up misfits getting their lives back on track at a low-rent local college. Before long, the show’s creator Dan Harmon (who later cocreated “Rick and Morty”) began experimenting wildly. The six seasons of “Community” aren’t just clever and funny; they also feature a talented cast of promising comic actors, including Donald Glover and Alison Brie.

In her string of Netflix specials, the stand-up comedian Iliza Shlesinger has riffed on relationships, popular culture and the fleeting obsessions of her generation. Shlesinger’s latest project turns those same topics into sketch comedy, for a fast-paced and satirical show likely to resonate with people who like “Inside Amy Schumer” and “I Think You Should Leave with Tim Robinson.”

A documentary dream team consisting of multiple Oscar and Emmy nominees and winners — including Alex Gibney, Roger Ross Williams and Liz Garbus — collaborated with the activist organization the Innocent Project for “The Innocence Files,” a nine-part docu-series meant to highlight examples of possible wrongful criminal convictions. Drawing on real cases, the filmmakers take a closer look at the way that dubious evidence, unreliable witnesses and overzealous prosecution can make injustice into a systemic social problem.

The controversial Israeli action series “Fauda” returns for a third season, with the show’s co-creator Lior Raz reprising his lead role as Doron Kavillio, a secret agent who takes undercover missions intended to expose and disrupt terror cells. In season three, the hero heads to the West Bank, posing as an Arab boxing instructor at a gym run by Hamas. Expect more of the tense cat-and-mouse games and explosive action for which “Fauda” is renowned.

The animator Pendleton Ward is best-known for creating the beloved fantasy cartoon “Adventure Time,” and is now following up his fan favorite with a much bawdier show, cocreated with Duncan Trussell. “The Midnight Gospel” follows a wannabe intergalactic and inter-dimensional social media influencer, who hops between worlds looking to get rich and famous by sharing some of the universe’s strangest stories. Judging by the images and footage released thus far, this new series seems likely to combine Ward’s fascination with the beautiful and the grotesque.

Before Thomas Middleditch and Ben Schwartz became popular comic character actors — appearing on raunchy cable TV shows like “Silicon Valley” and “House of Lies” — they cut their teeth in the improv scene, specializing in long-form sketches performed live with no script. They’ve lately been improvising as a duo, and three of their shows are being released on Netflix in what may become an ongoing series. According to Middleditch, each piece runs roughly an hour and features completely different characters and stories, made up on the spot in front of an audience.

Based on a darkly humorous book by the popular children’s author Lois Lowry, the computer-animated feature “The Willoughbys” features the comedian Will Forte and the singer Alessia Cara, providing voices for the characters of a precocious brother and sister who’ve come up with a plan to rid their drippy parents from their lives. Maya Rudolph voices the kids’ nanny, who helps them learn to appreciate what they have, and Ricky Gervais narrates the story as the family’s cat who marvels at the Willoughbys’ weirdness.

The “Avengers: Endgame” directors Joe and Anthony Russo reunite with Chris Hemsworth for an international thriller that the brothers co-produced and that Joe wrote. The Russos’ former stunt coordinator Sam Hargrave makes his feature-directing debut with what looks to be an old-fashioned pumped-up action picture, about a mercenary hired to rescue a crime-lord’s kidnapped son from the Asian underworld. . Terrific as Thor in the Marvel movies, Hemsworth could be just as much fun to watch as a morally conflicted soldier of fortune.

‘Never Have I Ever’

The writer and comedian Mindy Kaling follows up her long-running sitcom “The Mindy Project” and her movie “Late Night” with a new show that’s more autobiographical than anything she’s produced or starred in before. In “Never Have I Ever,” the newcomer Maitreyi Ramakrishnan plays Devi Vishwakumar, a California Indian-American teenager from an immigrant family, who’s trying hard to balance her demanding Hindu parents’ expectations with her own yearning to be an ordinary high school girl.

‘Tales from the Loop’ Season 1

Based on the whimsically surreal and fantastical work of the Swedish artist Simon Stålenhag, the episodic science-fiction drama “Tales from the Loop” is set in a small town where the kinds of wild visions usually seen on the covers of old pulp magazines and paperbacks — robots, floating vehicles, glowing orbs and the like — have become so commonplace that the locals barely notice them. The mysteries of these phenomena are part of the show’s larger story, but while some characters carry over from episode to episode, each individual chapter more or less stands alone.

Twice a week for five weeks, Amazon will be presenting a series of comedy specials starring some of Australia’s funniest and most imaginative comics. Stand-ups like Judith Lucy, Alice Fraser, Tommy Little, Dilruk Jayasinha and Zoë Coombs Marr will deliver sets that run the gamut from heartfelt personal monologues to raunchy rants about sex and human mortality — all given a uniquely regional spin.

It’s rare for a sitcom to be as warmly funny and as brutally frank as “Superstore,” a show about the low-wage employees of a chain department store in St. Louis, Missouri. America Ferrera plays Amy Sosa, a middle-manager who’s perpetually torn between climbing the corporate ladder and trying to help her co-workers preserve their dignity. Through the 70-plus episodes of its first four seasons, “Superstore” has featured jokes about the drudgery of working retail, alongside sharp criticism of the ways that some aspects of America’s economic system exploit the anxieties of unskilled laborers.

‘Selah and the Spades’

A hit with audiences at the 2019 Sundance Film Festival, the stylish and edgy high school melodrama “Selah and the Spades” offers a mix of teen movie high jinks and crime story twists. Written and directed by Tayarisha Poe, the film stars the charismatic Lovie Simone as a popular private school cheerleader who’s also a small-time drug kingpin, who coordinates a ring of dealers while considering who’ll take over the business after she graduates.

The writer-producer John Logan spent three seasons exploring the mythology of Victorian England for the horror series “Penny Dreadful,” which saw Logan throwing together different characters from famous 19th century novels. His sequel “Penny Dreadful: City of Angels” takes a different approach, with the story now set in 1930s Los Angeles where Mexican-American folklore, religious hucksters and Nazi spies drive the action. No longer a literary pastiche, this reinvention draws on history for an original spin on genre fiction.

This short, bittersweet tale of two very different Mexican-American sisters comes to an end with its third season, which will wrap up the story of Lyn (Melissa Barrera) and Emma (Mishel Prada) as they continue to deal with complicated romances and the legacy of their late mother Vidalia. Though it’s never been one of the most buzzed-about shows, “Vida” has been daring in its depictions of women’s relationships and sexuality, and groundbreaking in its exploration of Los Angeles’ changing Mexican neighborhoods.