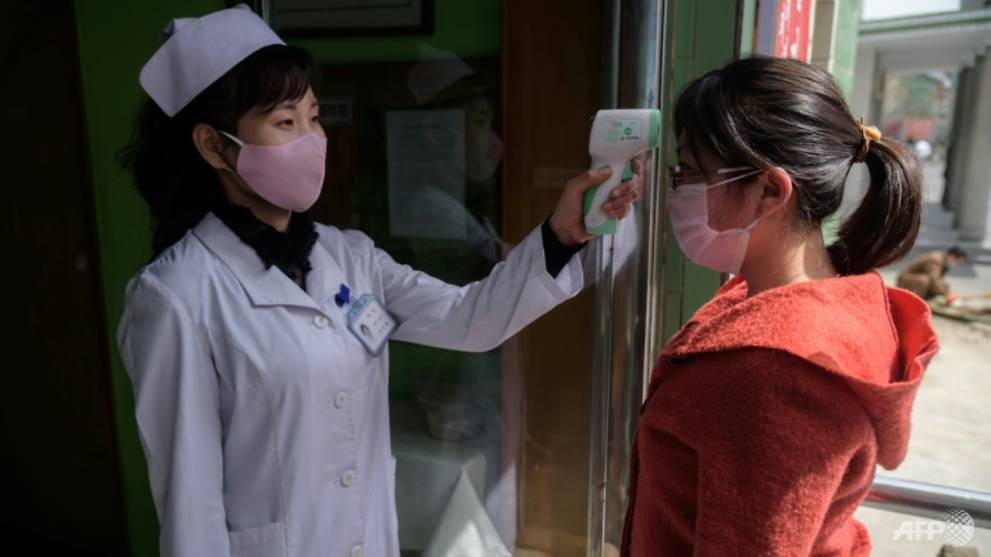 SEOUL: North Korea remains totally free of the coronavirus, a senior health official in Pyongyang has insisted, despite mounting scepticism overseas as known cases of infection topped one million worldwide.

The already isolated, nuclear-armed North quickly shut down its borders after the virus was first detected in neighbouring China in January, and imposed strict containment measures.

Pak Myong Su, director of the anti-epidemic department of the North’s Central Emergency Anti-epidemic Headquarters, insisted that the efforts had been completely successful.

“Not one single person has been infected with the novel coronavirus in our country so far,” Pak told AFP.

“We have carried out preemptive and scientific measures such as inspections and quarantine for all personnel entering our country and thoroughly disinfecting all goods, as well as closing borders and blocking sea and air lanes.”

Nearly every other country has reported coronavirus cases. Aside from China, South Korea endured one of the worst early outbreaks of the virus.

Recorded cases of infection across 188 countries now exceed one million, and these include 51,718 deaths, according to an AFP tally on Thursday based on official country data and World Health Organization figures.

Experts have said North Korea is particularly vulnerable to the virus because of its weak healthcare system, and defectors have accused Pyongyang of covering up an outbreak.

The top US military commander in South Korea, General Robert Abrams, said on Thursday that Pyongyang’s assertion it had no cases was “untrue”.

“I can tell you that is an impossible claim based on all of the intel that we have seen,” Abrams told VOA News.

The North’s military was “locked down” for 30 days in February and early March over the epidemic, he said.

“They took draconian measures at their border crossings and inside their formations to do exactly what everybody else is doing, which is to stop the spread,” he added.

US President Donald Trump said previously North Korea “is going through something” and offered “cooperation in the anti-epidemic work”, in a personal letter to North Korean leader Kim Jong Un.

And Choi Jung-hun, a former North Korean doctor who fled to the South in 2012, told AFP: “I heard there are many deaths in North Korea but the authorities are not saying that it’s caused by the coronavirus.”

As part of its anti-virus efforts Pyongyang put thousands of its own people and hundreds of foreigners – including diplomats – into isolation and mounted disinfection drives, with state media constantly exhorting citizens to obey health directives.

READ: WHO reiterates warning that kids are hit by coronavirus too

Published images have shown universal face mask use, with the exception of leader Kim, who has never been seen wearing one, even though for several weeks the officers alongside him when he supervised firing exercises donned black coverings.

More recently his aides have also been seen without face masks, although defector Choi said that did not signal the North’s containment efforts had been widely successful.

Pyongyang – which is subject to multiple international sanctions over its nuclear and ballistic missile programmes – has sought virus-related aid.

In February, Russia’s foreign ministry said it provided Pyongyang with 1,500 coronavirus diagnostic test kits at its request “due to the persisting risk of the new COVID-19”.

The United Nations has granted sanctions exemptions to relief groups including Doctors without Borders and UNICEF on items such as diagnostic kits, face masks, protective equipment and disinfectants.

Both Doctors Without Borders and UNICEF – whose shipments were requested by North Korean authorities – said that their supplies had arrived overland from China.

“DPRK has an overall lack of medical supplies and the latest diagnostic equipment,” a Doctors Without Borders spokesperson told AFP, using the initials of the country’s official name.

The World Health Organisation plans to spend US$900,000 to support Pyongyang’s coronavirus response activities, according to data posted on the UN Office for the Coordination of Humanitarian Affairs website.