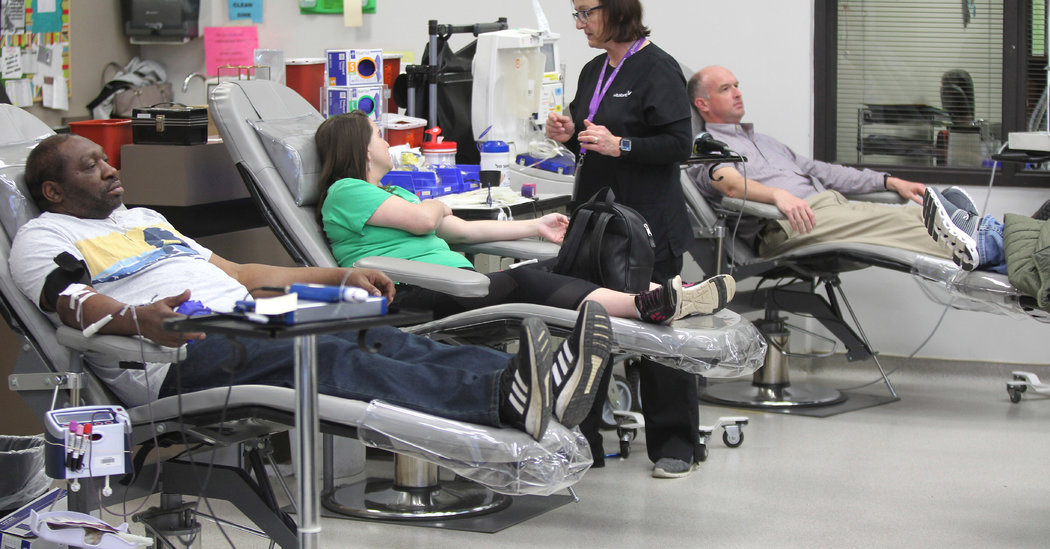 The Food and Drug Administration announced on Thursday that it was significantly loosening its recommendations for blood donations from gay and bisexual men, reducing the amount of time men who have had sex with men should wait before they give blood to three months from one year in hopes of ameliorating a drastic drop in supply during the coronavirus pandemic.

The earlier 12-month waiting period was intensely criticized as discriminatory and antiquated when the F.D.A. introduced it in 2015 to replace a lifetime prohibition on blood donation by gay and bisexual men.

That ban was enacted in 1983, early in the AIDS epidemic when little was known about the human immunodeficiency virus that caused the disease. The F.D.A. re-examined the ban over the years, but had maintained that the restriction was necessary to keep the blood supply safe and untainted by H.I.V.

In support of its change on Thursday, the agency said in a statement that based on recent studies, it had “concluded that current policies regarding certain donor eligibility criteria can be modified without compromising the safety of the blood supply.”

The F.D.A. said the new recommendations would remain in place after the pandemic ends.

L.G.B.T.Q. advocates applauded the agency’s latest move on Thursday, but said they would work to lift the waiting period entirely.

“L.G.B.T.Q. Americans can hold their heads up today and know that our voices will always triumph over discrimination,” Sarah Kate Ellis, the president and chief executive of GLAAD, said in a statement on Thursday. “This is a victory for all of us who spoke out against the discriminatory ban on gay and bisexual men donating blood.”

The F.D.A. also previously recommended that women with male sexual partners who have had sex with men in the past year not donate blood. The revisions on Thursday lowered that period to three months as well.

The move came as thousands of blood drives nationwide were being canceled alongside the closures of schools, churches and other institutions during the outbreak. Some possible donors and volunteers have avoided blood donation centers because of social distancing guidelines.

Organizers have put into place new measures to keep donations flowing, including checking the temperatures of staff members and donors, providing hand sanitizer and increasing the spacing between donors.

Still, doctors and organizations that support blood donation have emphasized that they need donations to maintain a stable blood supply.

“Maintaining an adequate blood supply is vital to public health,” the F.D.A. said in the statement. “Blood donors help patients of all ages — accident and burn victims, heart surgery and organ transplant patients, and those battling cancer and other life-threatening conditions.”

Dr. Amesh Adalja, an infectious diseases physician at the Johns Hopkins Bloomberg School of Public Health, noted that there were still “gunshot wounds happening all over the country, there are people in car accidents.”

“The reasons that people need blood transfusions aren’t really going to be impacted by this,” he said.

Even before the pandemic, there had been a chorus of voices calling for the F.D.A. to lift or change its constraints on blood donations from gay and bisexual men.

In November, the American Red Cross called for the F.D.A. to reduce the deferral period for men who have had sex with men to three months, noting similar moves in Britain and Canada. On Wednesday, Representatives Carolyn B. Maloney and Alexandria Ocasio-Cortez, Democrats of New York, sent a letter to the agency calling for a revision of the policy.

“This wasn’t something we needed to keep anymore,” Dr. Adalja said. “These types of restrictions weren’t really making sense in the era of modern diagnostic technology.”

“It’s too bad that it took a pandemic to actually prompt this, because it should have been prompted much earlier when technology was such that we could ensure the safety of our blood supply,” he said.

“We may be talking about up to 11 percent of the population that identify as being members of the L.G.B.T. community,” he said. “By increasing the blood supply to let these additional individuals be able to donate blood, that will certainly make blood more available to those who need it.”

The F.D.A. enacted the lifetime ban on male donors who have sex with men in 1983, the year the virus that would become known as H.I.V. was discovered. At the time, there was no way to test blood donations for the presence of the virus.

When the F.D.A. scrapped the lifetime ban in December 2015, gay rights groups called the move a major stride toward ending what they considered a discriminatory national policy. Critics maintained that donations should be considered on an individual basis, as gay men — like some heterosexual men and women — are at far higher risk of H.I.V. infection than the general population.

“While this change by the F.D.A. is a step in the right direction, it still bases itself in bias rather than science,” Alphonso David, president of the Human Rights Campaign, said in a statement. Creating policy based on identity as opposed to risk is “irrational” given the current Covid-19 epidemic, he said.

“It is more critical than ever to prioritize science and facts over fear and bias.”