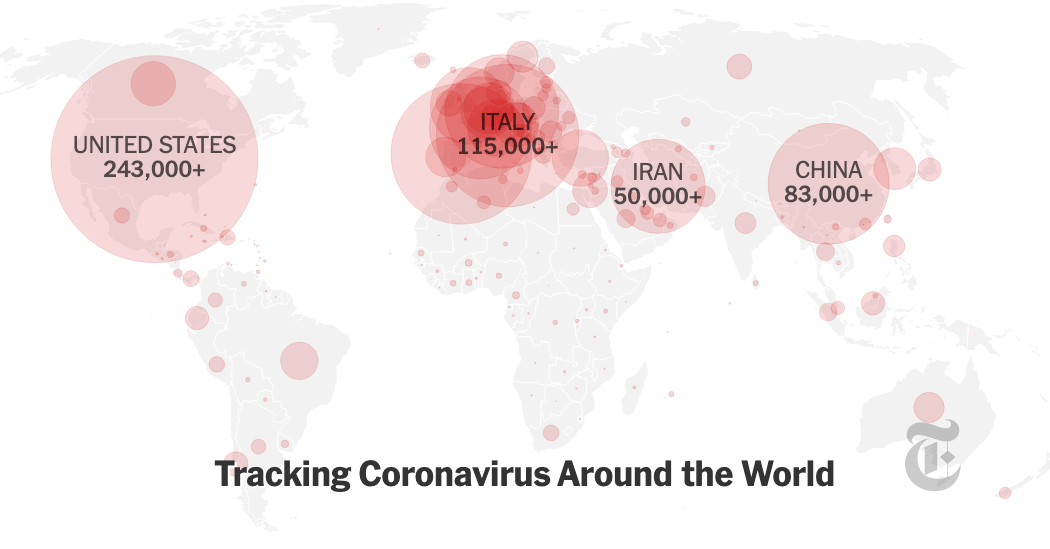 Millions more Americans are suddenly out of work

Experts say the figure should be even higher, but some state unemployment systems were so swamped that people couldn’t get through to file a claim. The monthly employment report for March, due on Friday, is likely to be ugly as well.

This will be a recession like no other in memory. Recessions usually start with a financial or economic crisis that prompts consumers to cut their spending; the big job losses follow over time as revenue-starved businesses slash payrolls or close their doors. But with this one, the layoffs are coming right at the start, because of stay-home orders and business restrictions.

And it will be the virus, not economic forces, that will determine when a recovery can begin. No one yet knows what that recovery will look like, or how long it will take.

Ron Lieber, the “Your Money” columnist for The Times, spoke to us about the impact of the sweeping job losses. Here are excerpts from the conversation.

What’s the first thing someone who is laid off should do?

Apply for unemployment — and you should keep trying. The new legislation allows for an extra $600 per week of assistance, and that extra money can be enough to make a difference between financial disaster and near financial calamity. And that’s why Congress offered it.

What do you tell people who are struggling to process all this?

It doesn’t look quite like anything we’ve seen before in our lifetime. Trying to plan or make predictions is really hard — and to tell people to embrace that uncertainty is not really helpful. I think the best thing is to talk to as many people as possible who have the same uncertainty that you do.

Will the U.S. economy just bounce back to where it was before, or do you expect lasting changes?

If we continue to believe that capitalism and market economics are the right way to structure our country, then there probably ought to be at least some way our economic activity will revert to some level of normalcy. I would not believe anybody who is trying to predict when that will be.

The Democratic convention is delayed, but not the Wisconsin primary

The coronavirus outbreak is playing havoc with the political calendar. Fifteen states and one territory have postponed their primaries or switched to voting by mail with longer deadlines. And the national Democratic convention in Milwaukee, where the party formally selects its presidential candidate, has been pushed back a month to mid-August, a week before the Republican convention in Charlotte, N.C.

And then there’s Wisconsin, which is moving ahead with its primary next Tuesday, despite concerns about in-person voting during a pandemic.

Perhaps those most at risk on Election Day are the state’s poll workers, who tend to be older and have health conditions that make them vulnerable, according to Nick Corasaniti of The Times, who interviewed Wisconsin poll workers.

“Almost everyone I talked to was very conflicted about the risks — and many just said: ‘You know what, it’s not worth it. I can’t show up,” Nick said. “I spoke to three who were over 70, and heartbroken that they couldn’t be there. But they said they just couldn’t put themselves at risk.”

The primary is forcing Wisconsinites to decide between public health and the right to vote, Nick said. One chief inspector told him, “Being complicit in putting public safety at risk seems a greater guilt to bear than letting democracy down.”

(If you are a Wisconsin voter, Thursday is the deadline to request an absentee ballot. You can sign up to vote by mail on the state’s elections website.)

At least 297 million Americans have been told to stay home, but millions continue to show up for work, because they can’t do their jobs from home, or can’t afford to lose income, or are considered essential to keeping the community functioning.

In their own words, workers across the country describe life in a changed world in The Times Magazine.

“I would be lying to say I’m not worried about exposure to Covid-19,” said Nikki Grigalunas, a homeless-outreach worker in Chicago. “But when I’m in the field, the first thing I’m thinking about is helping our people cope. We make sure that somebody sees them. We hold hope.”

The Times reporter Jan Hoffman and the photographer Chang W. Lee rode along with a special unit of emergency medical workers in Paterson, N.J., as they responded to 911 calls for suspected coronavirus cases.

The responders worked by three rules: Don’t go in a home, don’t touch the patient, and don’t take anyone to the hospital unless it’s absolutely necessary.

Stay-at-home orders have many Americans staying put, but people who live in areas without restrictions have kept in motion, according to a Times analysis of anonymous cellphone data from 15 million people.

Not all trips are problematic: Driving a few miles to pick up groceries would not violate stay-at-home orders. But in general, moving around more leads to more contact with others and more chances to catch or spread the disease, researchers said.

Lend a hand to those in need. Local newspapers and websites are aggregating ways you can give or receive help. Here are a few other lists with ways to help.

Stop trying to be productive. You do not have to write the next great American novel or get in the best shape of your life with all your “extra time.” Sometimes, attending to basic needs is plenty.

Channel your anxiety. Stress is bad for you only if you believe it’s bad for you, according to research. Try this three-step guide for adopting a “stress-is-enhancing” mind-set.

Embrace the ethos of travel. Cook your way through a French cookbook, lean into fantasy worlds or use an app to discover local wildlife. Our latest 36 Hours column has more travel-inspired activities for those sheltering in place.

Donate to organizations on the front lines

For more than 100 years, The Times has raised donations for charity through our Neediest Cases Fund. Now we’re starting a special initiative: the Covid-19 Relief Campaign. Proceeds will go to organizations on the front lines of the pandemic. Learn more, and donate, here.

I established a virtual faculty lounge using Google Classroom where my teaching “family” can trade ideas, share resources, vent, and just touch each other virtually to stay connected as we dive into the unknown with distance teaching and learning.