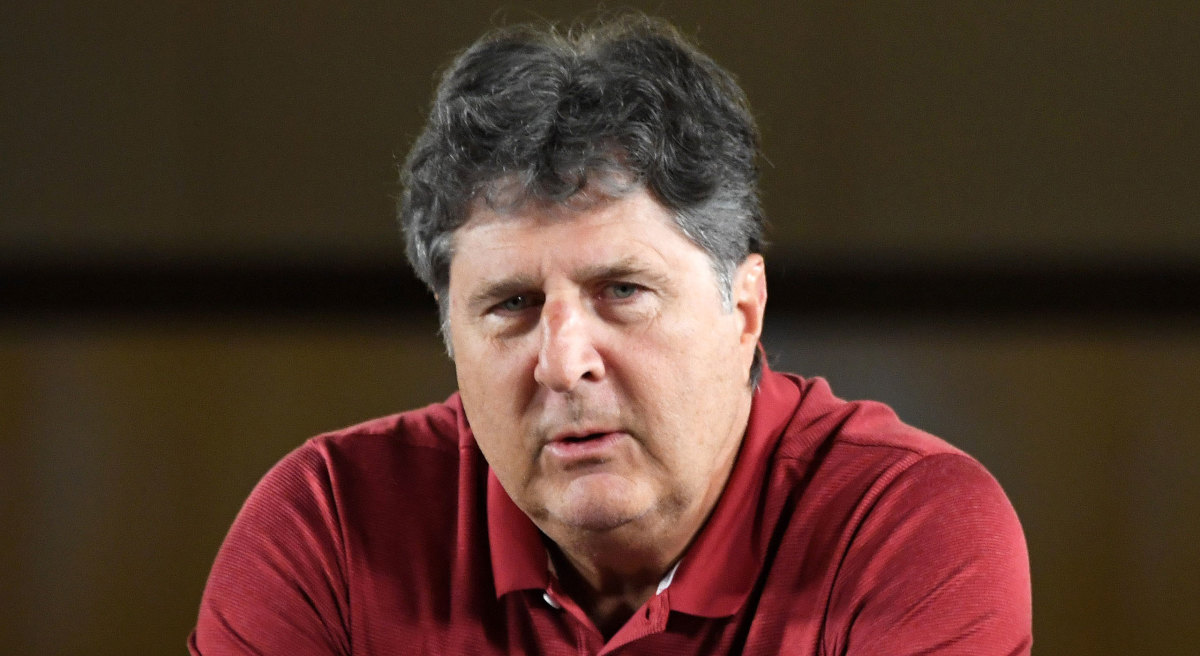 Mike Locksley first saw the dishwasher as a foreign object, dropped into his kitchen by an alien being. He barely recognized it, so he certainly didn’t know how to use it. After all, Locksley grew up in a humble inner city home in Washington, D.C. To him, a dishwasher had 10 fingers, two palms and a soapy sponge.

Now, 40 years later amid a pandemic that has shut down sports, he’s alone in his home, quarantined by himself while his wife is stuck in Florida, and he’s having to use, for the first time ever, a dishwasher. The 50-year-old Locksley opens it (that’s the easy part), loads dishes into it (again, easy), finds the dish soap (not so hard either) and then applies said soap into the… the… oh dear. “I didn’t know where the soap thing goes in the dishwasher,” laughs Locksley, the second-year Maryland head coach. “I had to call my wife a couple of times and FaceTime her. ‘Where does it go?’”

Locksley’s story isn’t so unique. Across America, college football coaches are learning about life at home. Highly paid workaholics stuck in an office from early morning to late evening, the coaching community is very much used to juggling family and football, just now they’re doing it from a place some of them rarely spend time: their house.

Many of them now work normal hours these days, another twist in their life. They conduct video conference meetings in the morning, followed by electronic interaction with players in the afternoon and then on to phone calls with recruits in the evening. They can only do so much work remotely, though. “If there’s 24 hours in a day, I spend 20 on defense,” new Baylor coach Dave Aranda says. “This is a brand-new world.”

Some coaches have spent more time home in the last two weeks than they’d spent home over an entire season, and while they love their children and spouses, forgive them for not yet embracing this style of living. “Life at home is hell,” one SEC assistant said, speaking on anonymity. “You’re never home. You don’t know s—. You don’t know schedules. Now you’re home and it’s, ‘We do this at that time and that at this time.’” The coach says he needed to “re-introduce” himself to his children. Daddy’s home—for good!

Many have found ways to escape. “I’m at Home Depot. I had to get out,” says one college football coordinator during an interview last week. “I told my wife ‘I’m going to build something. I don’t know what it is, but I’m going to build something.’” Home repair has become a side job for some. The flickering light, the cracked kitchen floor tile, the squealing toilet, they’re all now being repaired by a father who’s usually working 14–18 hour shifts.

For the first time ever, some have embraced a thing called Netflix. Ohio State coach Ryan Day and Mississippi State coach Mike Leach say they’ve both watched the streaming hit show Tiger King. Leach has even produced an hour-long podcast about the dark, seven-episode Netflix docu-series. Movie night is now a thing for many coaches. They gather in their living room after dinner for a flick with the kids. Think again if you believe they’re selecting the movie. “We just watched Sonic the Hedgehog last night,” says Aranda.

Aranda, a father of three, finds himself juggling phone calls with recruits while in the background one of his daughters continuously plays a particular John Legend song on the piano as part of her lessons. Each morning, no matter the circumstance, South Florida coach Jeff Scott’s 4-year-old daughter bursts into his home office, often times maneuvering her way in front of a web camera during a USF team meeting. Some coaches are treating their children as they might their players—teaching and training them. One assistant has a mandated physical activity session each afternoon for his two young boys, and another coach has found use for his math degree: he’s teaching his kids subtraction and addition each morning.

Leach’s kids are all grown and out of the house. He’s spending his quarantine days in one of the more isolated places in the country: the island of Key West. It’s warm, sunny and empty. It’s as if an evacuation order is in place as a hurricane is barreling down on south Florida. Leach has been reading a book about a CIA agent, watching Netflix’s series Ozark, riding his bike on the quiet streets and eating fresh stone crabs. He’s got a stone crab guy who is still hauling in the delicacies.

Coronavirus has directly impacted some more than others. LSU receivers coach Mickey Joseph is unfortunately in the former. His uncle, Eric, died from the virus earlier this week. In general, LSU has been impacted more than most major universities, primarily because of its proximity to New Orleans, a hotspot for the disease. The city has reported more than 120 virus-related deaths and over 3,100 infections. Eric Joseph, a 74-year-old with pre-existing health conditions living in the New Orleans area, began to feel ill two weeks ago, was diagnosed and then had fluid build around his lungs. He spent a few days in the hospital on a ventilator before passing Monday night, Mickey Joseph said in an interview with Sports Illustrated.

The LSU receivers coach is brother to Vance Joseph, the former head coach of the Denver Broncos. The Josephs can’t hold a proper funeral because of Louisiana’s stay-at-home order, but some of them will gather at the grave site, without their children. Mickey Joseph has a message for the country. “I know people want to go out and do things, but stay your ass home,” he says.

Head coach Ed Orgeron got a scare over the weekend. His elderly mother Coco called her son Saturday as she was rushed to the hospital with a fever. “They think I may have the virus,” she told him. Thankfully for the Orgerons, a toe infection caused the fever. Doctors operated and released Coco earlier this week. But several of Orgeron’s players have been impacted, at least one whose parent has the virus. “You call them and talk to them,” Orgeron says. “We’re family. We talk to them. I call the parents and talk to them.”

Meanwhile, some coaches and their spouses are stuck in a specific location. Aranda has spent the past two weeks closer to his former school, LSU, than his current one. He visited his family, still living in Baton Rouge, and is now, because of quarantine laws in Texas, unable to return to Waco without having to self isolate for 14 days. He doesn’t know when he’ll be able to return to BU. A few weeks ago, Locksley’s wife traveled to Florida to visit their daughter. She’s been down there for more than two weeks now. The Locksleys believe it’s too unsafe for her to travel back to Maryland.

The weirdest thing for many coaches is the absence of face-to-face time with their players. Most haven’t seen them for nearly a month. At Baylor, the school had spring break the week before spring practice was scheduled to begin. Aranda, one of the last head coaching hires in the 2019 cycle, hasn’t seen his players since March 6 after having just been introduced to them weeks earlier. For first-year coaches, this is especially difficult. “First spring you get to in a new job, it’s critical for installing offense and defense and fundamentals of your culture you want to establish,” says Scott, a former longtime Clemson assistant before taking the head gig in Tampa this offseason. “A lot of it takes time and face-to-face time and takes experiences on the field. It’s a challenge.”

Before the shutdown, Aranda’s Baylor team at least conducted eight install sessions with walk-throughs, but he’s being realistic. His team will be behind many others. They’ll have to rely this fall on base offensive and defensive systems and play stellar technique. “The first game against Ole Miss, we’ve got to move the line of scrimmage,” he says. “We’ve got to do the basic things well. That’s the stuff that’s going to win the game, not how much stuff we carry and use. It’s our basic stuff. That’s the way we have to go. We don’t have the reps or time. Got to say this is who we are and do the basic stuff well and build as the season goes. For the first year, it’s difficult.”

While quarantined, coaches are finding more time than ever for their own personal development. One assistant has been poring over NFL film, most recently examining Sean Payton’s New Orleans Saints offense. A young Group of Five assistant coach has video sessions scheduled with longtime college coordinators for next week, hoping to glean something from them during the downtime.

And then there’s Locksley, who is doing physical development while figuring out that dishwasher. He has started a six-day-a-week workout program with a personal trainer. “Trying to get this weight off me,” Locksley says about a training regimen that’s three days of weights and three days of cardio with a day of rest. “My arms are sore, chest is sore. This guy has me doing squats and stuff I haven’t done since my playing days. We’ve challenged our players to stay in good condition. I’m doing it myself as well. Maybe they’ll see I put in some work.”

So, what about that dishwasher? He’s long crossed that hurdle. Now for the other appliances. “I have to wash clothes and learn my ways around the washer and dryers. They are fancy nowadays,” he says, “like computers.”