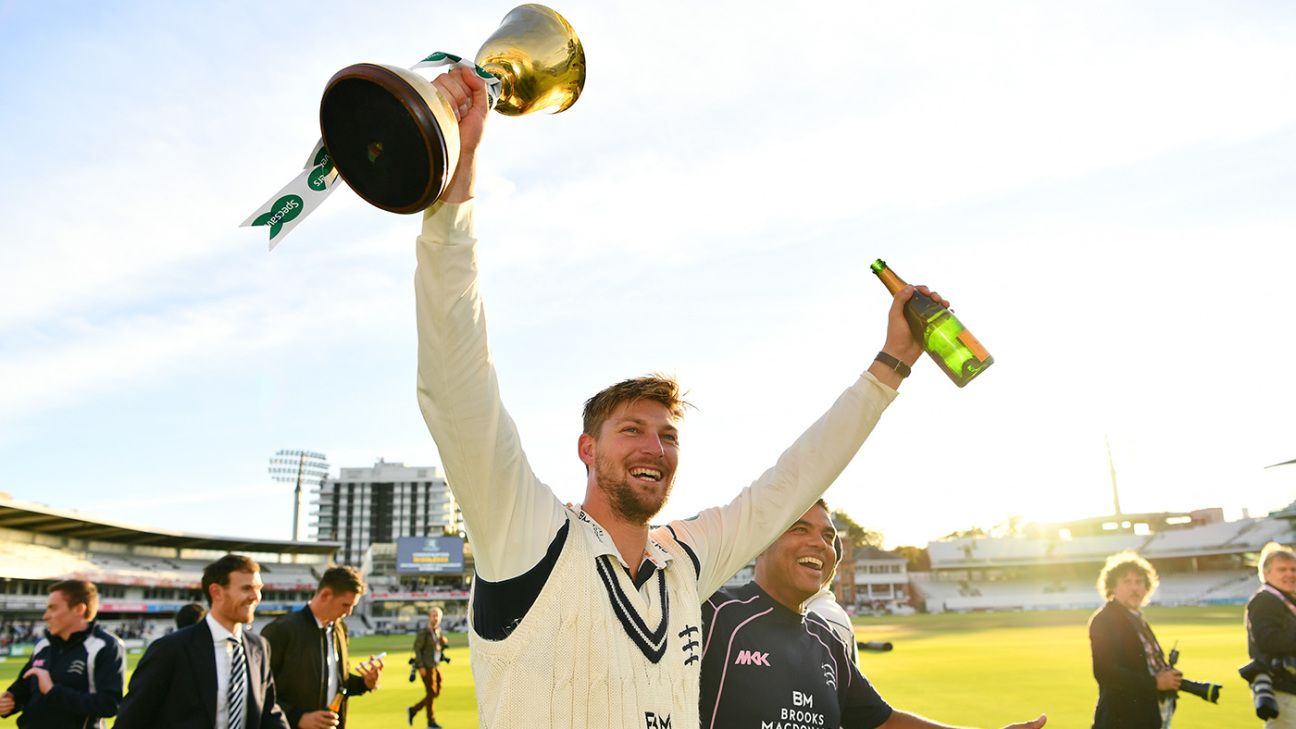 Ollie Rayner, the offspinner who won the County Championship with Middlesex in 2016, has confirmed his retirement from cricket at the age of 34 after his release at the end of last season.

Rayner, a tall spinner with an orthodox action, took 51 wickets at 23.56 in Middlesex’s title-winning team in 2016, but was consigned to a holding role in the following three seasons and was twice sent out on loan after falling down the pecking order behind Ravi Patel and Nathan Sowter.

Intriguingly, both those loan spells were to Division One counties (Hampshire in 2018 and Kent in 2019) while Middlesex were in the second tier, demonstrating the high regard in which he was held elsewhere but also a breakdown in his relationship with the club.

Confirming his retirement in an interview with wisden.com, Rayner revealed that he only found out he had been put on the loan list last season when he was called by Kent “telling me they were looking forward to having me on loan”.

“I was like: ‘Hold on a sec, I’ve got to talk to my family.’ There were things that definitely could have been done better.”

Rayner also said that playing under Dawid Malan‘s captaincy from 2018 onwards was “very hard work”, suggesting that he never felt as though he had been given enough opportunity to impress. Malan left Middlesex at the end of last season, and since his departure several players have indicated that the dressing room had been a difficult place under his leadership.

“I didn’t always see eye to eye with Dawid,” Rayner said. “We had a chat at the end of last season and I said that if he goes to Yorkshire he should just stay out of the politics and get on with his batting because he’s a fine player. If he can do that he’ll go far.

“I haven’t necessarily got any animosity there, but that relationship didn’t really help me personally in my progression.”

Rayner previously detailed his frustrations about the plight of the English spin bowler in a 2015 article for ESPNcricinfo, in which he said “it is not easy being an English spin bowler at this moment in time”, and his case was backed up by his use in 2018, when he went unused in five of the nine Championship games he played.

ALSO READ: The plight of the English spin bowler

“Over the last few years I’ve been renowned as steady Ollie; I’ve offered a lot of control in what have been seamer-friendly conditions – I don’t think I thrived under that.

“It just clicked in 2016. I just felt so backed. In my career when I’ve had my best years it’s when I’ve been used as an attacking option.

“That year they were dependent on me for breaking partnerships. Adam Voges was brilliant in that he’d bowl me before lunch, and when you bowl well you stay on and earn the right.”

He spent the 2013-14 and 2016-17 winters on England Lions tours, and was perhaps unfortunate to miss out on the Test tours to Bangladesh and India in 2016-17 having been overlooked for Zafar Ansari and Gareth Batty. Aside from the Championship win, his finest hour came at The Oval in 2013, when his 15-wicket haul sealed a memorable win against Surrey.