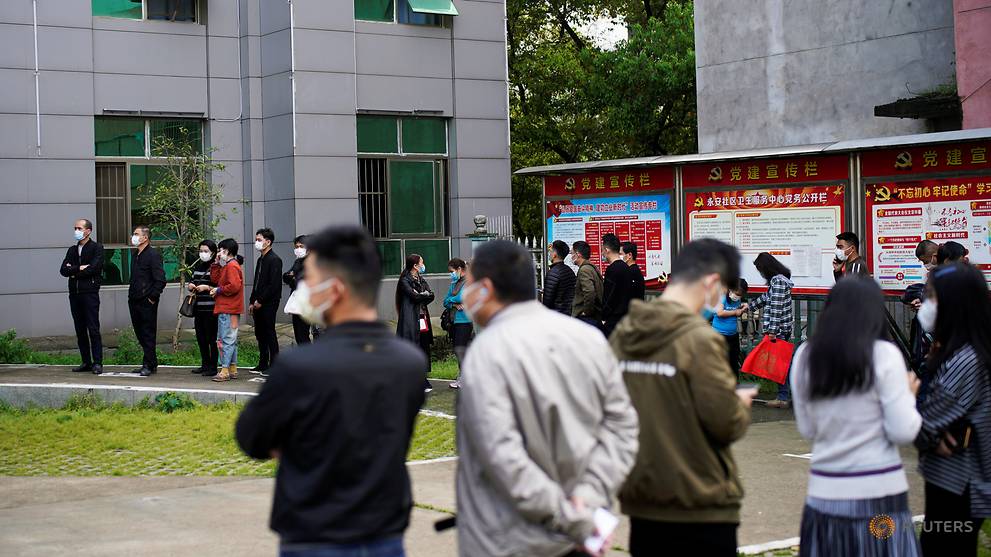 XIANNING, CHINA: Residents of China’s Xianning city eager to travel after a two-month lockdown faced an unexpected hurdle only hours after the borders were opened – they needed to pass a new rapid detection test to show they didn’t have the coronavirus.

Dozens rushed to the city’s largest hospital but were told the hospital was no longer doing the nucleic acid tests and were advised to try hospitals in nearby villages or towns.

The test uses genetic material from throat swabs and normally takes a few hours for a result.

“If we can’t get the nucleic acid test how can we leave? I can’t get on the train, I’ve bought my ticket but I can’t leave,” Shen Jianning, 51, said on Thursday (Mar 26) morning.

Shen, who wants to return to his job on a metro construction project in Shanghai, rushed to Xianning Central Hospital at around 4am on Thursday in hopes of getting a nucleic acid test, but was told by doctors there that they no longer were doing the tests and he had to find an alternative.

READ: Commentary: The problem with reusing the 2009 global financial crisis playbook to deal with COVID-19

Signs pasted on glass doors of the hospital, the city’s largest, said people should go to village or town hospitals to get the tests done.

Xianning announced the test requirement on its official WeChat account on Wednesday, the day Hubei province, epicentre of China’s coronavirus outbreak and home to 60 million people, removed much of its lockdown transport measures.

The lifting of the Hubei lockdown is a major milestone in the fight against the coronavirus in China. More than 80 per cent of COVID-19 cases and 96 per cent of deaths in mainland China have been in Hubei.

The provincial capital Wuhan, where the virus first appeared late last year and which has had 54 per cent of cases, remains under lockdown until Apr 8.

The order to use the rapid-detection test came after news that a man who had travelled from the city last week had later tested positive when he returned to work in Guangdong province.

The lifting of the lockdown has been accompanied by both relief and worry, with several people in Xianning telling Reuters they were unnerved by the case of the man who had travelled to Guangdong.

“My Shanghai boss has called me a few times asking me to get out as soon as possible. He even prepared the proof of work resumption for me. He told me what processes you need to do we will help you, just think of a way to get out,” Shen said.

Shen, from the eastern province of Jiangsu, had been trapped in Xianning after travelling to the city to see a house he had bought there.

STUCK, INSIDE OR OUT

Millions of people were caught in Hubei or stuck outside it as China imposed draconian measures to curb the spread of coronavirus, an approach that has proven effective, with reported new domestically transmitted cases falling to zero on most recent days, even as imported cases persist.

On Thursday morning, about 30 people queued outside Xianning Central Hospital, all of them required to complete a form declaring whether they had recently come back from overseas or been in any high risk areas.

Some in the queue said they were lining up for a nucleic test, but were unclear where they could get it done. A number were trying to get back to Guangdong province to work.

“I saw on Douyin that a few hundred people came here yesterday, there were lots of people,” said He Ting, referring to the Chinese version of TikTok.

She has been stuck in Xianning since Lunar New Year in January and was trying to get back to her job in the southwestern city of Chengdu, in Sichuan province, and was also unable to get the test at the hospital

“I’m trying to figure out another way,” she said.

At the Xianning Yongan Health Service Centre, a community health centre, more than a hundred people milled in and outside its gates. A long queue snaked with people clutching paper slips with numbers on them. Some said they were told that results would take a day or two.

“I came here to queue but they told me I needed to register and then wait for a call on when it’s my turn,” said a man as he got on his electric scooter to leave.

“I need to get back to my job in Dongguan. But now I don’t know when I can leave.”