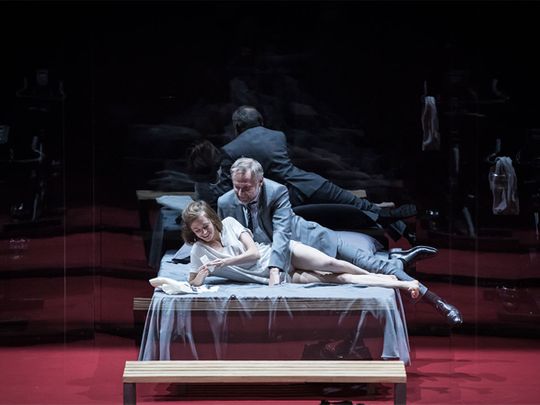 Dubai: As the UAE is encouraged to stay at home as part of the global #StayHome campaign, people can still experience the spirit and excitement of live theatre and enjoy the best seats in the house this weekend by streaming performances online.

To celebrate World Theatre Day on Friday 27 March, Sharjah Performing Arts Academy (SPAA)’s Executive Director, Professor Peter Barlow, has shared some of his top picks of theatre productions to watch in the safety and comfort of your own home.

Into the Woods starring Hannah Waddingham

Originally performed in London’s Regents Park, Stephen Sondheim’s Into the Woods weaves together many famous fairy tales in a story of family, love, growing up and the hazy areas between right and wrong. The production was captured by Digital Theatre live at London’s Regent’s Park Open Air Theatre and was directed by Timothy Sheader. The performance can be rented online here.

An award-winning tale that has been retold time after time on the stage, in film and in musicals around the world, Sweeney Todd is a fictional character who first appeared as a villain of the Victorian penny dreadful serial, The String of Pearls. The play follows the story of Todd, the demon barber of Fleet Street and his partner in crime, Mrs. Lovett. The performance can be streamed or bought here.

Set in the places where rock and roll was born in the 1950s, Memphis tells the fictional story of DJ Huey Calhoun, a good local boy with a passion for R&B music and Felicia Farrell, an up-and-coming African American singer that he meets one fateful night on Beale Street. Despite the objections of their loved ones, they embark on a dangerous affair. As their careers rise, the relationship is challenged by personal ambition and the pressures of an outside world unable to accept their love. The performance can be streamed here.

The Crucible is a partially fictionalised telling of the Salem witch trials. Accusations of witchcraft spiral out of control and many must choose between reputation and integrity. Captured by Digital Theatre live at London’s Old Vic, The Crucible was directed by Yael Farber. The play can be rented online here.

Paris’s esteemed Odeon has released its 2018 production of The School for Wives, a theatrical comedy written by the seventeenth century French playwright Molière on Vimeo. The performance can be streamed here.