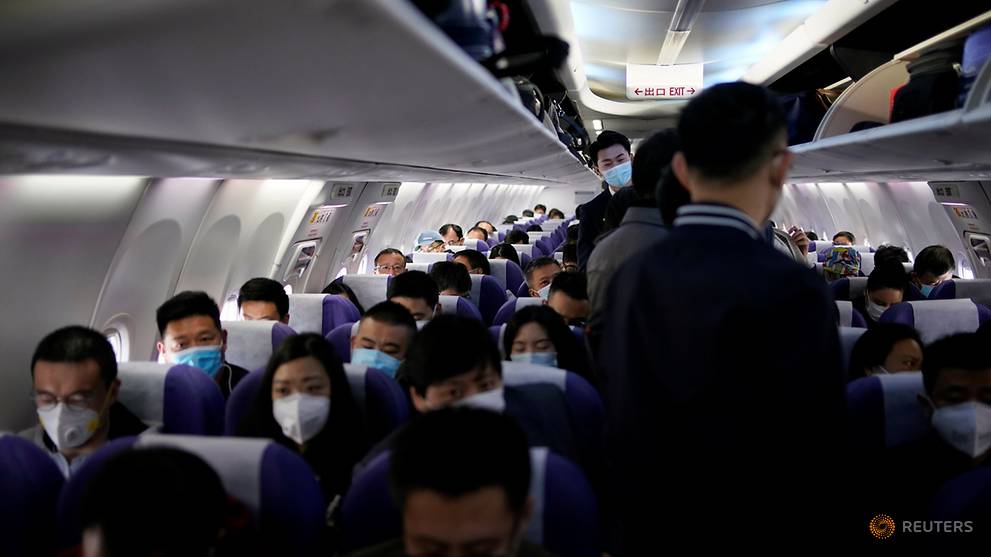 BEIJING: China will block most foreigners from entering the country – including those with valid visas and residence permits – to stem the spread of the coronavirus pandemic, the foreign ministry said on Thursday (Mar 26).

“The suspension is a temporary measure that China is compelled to take in light of the outbreak situation,” the ministry said in a statement, adding that the measure will take effect from midnight on Saturday.

Exemptions will be made to those travelling in a diplomatic or official capacity, as well as holders of “C” visas, the ministry said in a statement.

“C” visas are issued to foreigners involved in provision of international transportation services.

China has also ordered airlines to sharply cut the number of flights in and out of the country out of concern that travellers from overseas could reignite the coronavirus outbreak.

The Civil Aviation Administration of China (CAAC) said on Thursday it had directed Chinese airlines to maintain only one route to any country and limit the number of flights to one per week, effective Mar 29.

The authority also ordered foreign airlines to reduce their international routes to China to one per week and only operate one route into the country.

“In accordance with the need for epidemic containment, CAAC may issue policy to further reduce the total number of international passenger flights,” the regulator said in a statement.

Around 80 per cent of international flights were already being cancelled prior to the announcement, but Chinese airlines had been asked not to cut their international routes until Thursday’s order by the CAAC.

The moves, in conjunction with severe quarantine rules now being imposed on people arriving in the country, are set to slow the flow of inbound travellers to a trickle.

Beijing is keen to prevent a resurgence of the coronavirus epidemic that emerged in the Hubei region’s capital Wuhan in late 2019 and has killed nearly 3,300 Chinese citizens to date and more than 21,000 people globally.

Severe curbs on travel and transport brought the epidemic under control in China but at a heavy price, with some analysts expecting an outright contraction for the country’s economy in the first quarter. Beijing is exhorting industries to reopen, but the virus, which has now spread around the globe, continues to threaten China’s economy and the health of its people.

Mainland China has not seen any new locally transmitted coronavirus cases in six of the past eight days, shifting the focus to preventing infected people arriving from overseas from triggering a fresh outbreak in the country.

All 67 new cases reported by the end of Wednesday were imported, as were all 47 reported the previous day, the National Health Commission said earlier on Thursday, putting the total number of confirmed cases to date at 81,285.

The commission reported a total of 3,287 deaths by the end of Wednesday, up six from the previous day.

Hubei, home to some 60 million people, reported no new cases on Wednesday and opened its borders.

The lockdown of Hubei’s capital Wuhan, where the virus first appeared late last year, will be lifted on Apr 8, a milestone in China’s war against the epidemic.

About 90 per cent of all the imported cases are Chinese passport holders, Vice Foreign Minister Luo Zhaohui told a press conference, adding that 40 per cent of those were overseas Chinese students returning amid rising infections abroad.

“We understand some overseas students are eager to come home…But under the current circumstances, by staying put, they can avoid being cross-infected in the hurried journey home or getting stuck mid-journey when the countries they transit in tighten border controls,” Luo said.

Shanghai will make every international traveller arriving from 6 p.m. local time (1000 GMT) on Thursday go into quarantine for 14 days, the local government announced.