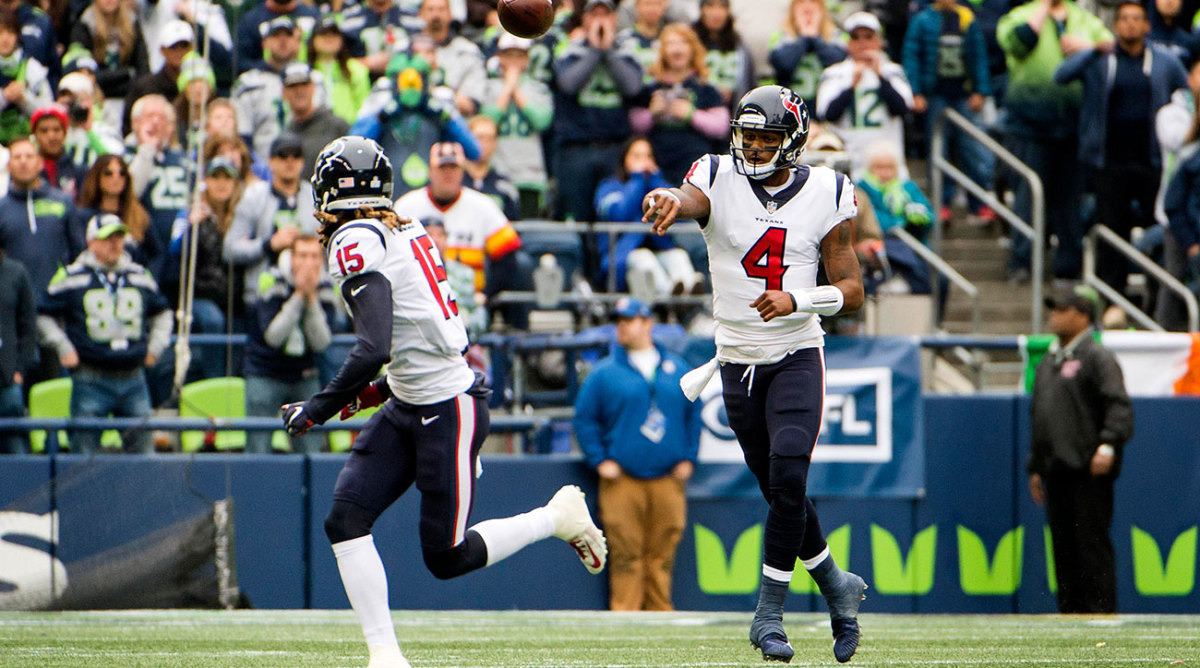 Assuming left tackle Laremy Tunsil gets signed long-term sometime in the near future, every notable player on Houston’s offense is locked up through at least the next two years…except for wide receivers Kenny Stills and Will Fuller. Neither is likely to be outlandishly expensive to re-sign, but Fuller fits the profile of a player who gets away in free agency; he’s not quite good enough to franchise tag but will garner inflated money on the open market because all it takes is one team to be gaga over his speed. The Texans would be wise to draft some wide receiver insurance, preferably an immediate contributor given DeAndre Hopkins’s departure and Fuller’s history with injuries. With this being such a rich wide receiver draft class, head coach/GM Bill O’Brien can wait until the middle rounds.

The more immediate task is restocking the defensive front. Losing nose tackle D.J. Reader hurts, especially for a team whose best linebacker (Zach Cunningham) is the type of lithe run-and-chase tackler who must be kept clean. Brandon Dunn can be a serviceable replacement for Reader, but it would still behoove the Texans to find one more guy. Whoever it is must be nimble. The Texans run a 3-4 on paper, but like most 3-4 defenses today, once the ball is snapped they actually employ a lot of the one-gap principles of a 4-3. A nimble defensive lineman is important, but because he’ll be needed on first and second downs—where Reader did his best work—he must also be big. “Nimble and big” is a rare combination, which could be difficult for the Texans to find given that their first pick is not until No. 40.

Perhaps just as important: The Texans need another pass rusher. When J.J. Watt was out last year, quarterbacks had all day to throw against this D. Houston currently features a 3-2 dime package that often has linebacker Benardrick McKinney serve as a fourth stand-up rusher. McKinney is a sturdy player but that’s not his natural role.

Top-100 Targets (Houston owns picks 40, 57 and 90): It’s a strong interior D-line class (as it seems to be every year), and there’s a good chance someone like Missouri’s Jordan Elliott, who could likely help fill the void left by Reader, will be on the board at 40. They’d also likely consider developmental guys Justin Madubuike of Texas A&M and Neville Gallimore of Oklahoma, though they are more one-gap penetrators. If they’re looking for immediate help at receiver, USC’s Michael Pittman Jr. and Minnesota’s Tyler Johnson both have contested-catch ability. For help off the edge on Day 2, they can roll the dice on a high-ceiling prospect with durability concerns, like Alabama’s Terrell Lewis or Notre Dame’s Julian Okwara. Syracuse’s Alton Robinson and Florida’s Jonathan Greenard could also provide good value on the second day.

Neither Philip Rivers nor Jacoby Brissett is under contract after this season, which puts “quarterback” on Indianapolis’s list of needs. But Rivers is here because the Colts are going all-in in 2020. One must figure that will influence how GM Chris Ballard uses his first few draft picks. That first pick—13th overall—was already spent in the trade for 49ers defensive tackle DeForest Buckner. That was a wise move, even if the Colts also had to make Buckner the highest-paid defensive tackle not named Aaron Donald. Buckner can make defensive coordinator Matt Eberflus more comfortable with calling the four-man rush concepts that he desires.

That four-man rush could use a little more juice off the edges. Indy’s second-best pass rusher is either Justin Houston or 2018 second-rounder Kemoko Turay, depending on your outlook. Both are sound, but neither is quite a pure speed-bender. Of course, since the Colts also invested a second-round pick in their D-line in 2018 (Tyquan Lewis) and 2019 (Ben Banogu), it’s possible they’ll prioritize finding a corner, especially after releasing veteran Pierre Desir, who had a bad finish to the 2019 season. Eberflus runs a predominantly zone-based scheme, even when he blitzes (which is more often than you’d think). But because unheralded star Kenny Moore has the slot defender duties locked up for the next several years, whoever Indy drafts at corner will play outside, which means he must be sound in his man coverage technique. Something to keep in mind: Almost all of Indy’s cornerbacks have at least 32-inch arms.

Shifting back to offense, one thing the Colts need and don’t have is a receiving tight end. (They let Eric Ebron walk in free agency.) Their top two tight ends, Jack Doyle and Mo Alie-Cox, are both quality all-around players, but head coach Frank Reich does a lot with three-tight end packages.

Top-100 Targets (Indianapolis owns picks 34, 44 and 75): Alabama’s Trevon Diggs, Virginia’s Bryce Hall, Clemson’s A.J. Terrell and Auburn’s Noah Igbinoghene are what Indy looks for in corners and each has a chance to fall to Round 2. Athletic tight ends will be available on the second day, including Washington’s Hunter Bryant and Florida Atlantic’s Harrison Bryant. And if they’re looking for juice in the pass rush, Syracuse’s Alton Robinson and the Florida’s Jonathan Greenard have the potential to become dynamic edge burners.

The Jags still have an NFL-quality roster, but with salary cap woes forcing them into a significant rebuilding effort, it’d be quicker to state the needs they don’t have: offensive line and linebacker.

Everything else is in play. It’ll be interesting to see the types of players Jacksonville picks. Head coach Doug Marrone is back but is automatically on the hot seat for the simple reason that the hot seat is where every coach goes who has suffered back-to-back double-digit-loss seasons. If Marrone is discharged, most of his staff will be too, and Jacksonville could be looking at new schemes on both sides of the ball. Knowing that they almost made a coaching change last season, does Jacksonville’s front office just draft the most talented prospects possible, hoping they can fit in any system? Or, do they plan for the best and go about things as if Marrone is sticking around long-term, in which case their draft decisions would take “scheme fit” into consideration? (Every team says they ignore scheme fit and only consider taking the best player on the board, but that’s mostly just lip-service. Scheme fit matters.)

If the Jags are drafting for Marrone’s system, which is coordinated by Jay Gruden on offense and Todd Wash on defense, then they need receivers and tight ends with reliable route running acumen (Gruden’s designs can take it from there) and defenders with the speed and quickness to fill out a mostly straightforward zone scheme that’s predicated on out-executing opponents. If there are a few defenders the Jags admire equally, the nod goes to whichever one most amplifies the four-man pass rush, as that’s what ultimately determines a 4-3 zone scheme’s efficacy.

Top-100 Targets (Jacksonville owns picks 9, 20, 42 and 73): Alabama’s Jerry Jeudy is a fit in Gruden’s offense and a fine complement for D.J. Chark. They might also be able to get LSU’s Justin Jefferson if they hold off on a receiver until Pick 20. If they address the pass rush in Round 1, Penn State’s Yetur Gross-Matos fits with that 20th pick; if they wait until Day 2, Syracuse’s Alton Robinson and Florida’s Jonathan Greenard make sense. Alabama’s Trevon Diggs and Utah’s Jaylon Johnson are both fits in Wash’s version of the Cover-3, as is Virginia’s Bryce Hall if they wait until Round 2.

The closest thing the Titans have to a glaring need on offense is at right tackle, where a replacement must be found for departed free agent Jack Conklin. Veteran Dennis Kelly is slated for that job right now, and he’s serviceable enough that you can run your full offense when he’s in. But ideally, Kelly is your swing tackle and your starter is someone with the high-level quickness and agility to accentuate the outside zone run-blocking that offensive coordinator Arthur Smith’s system is built on.

One other “need” that could be sitting in the tall grass is running back. Yes, Derrick Henry is back on a franchise tag deal, and yes, his punishing downhill running was a huge reason why the Titans reached the AFC championship last year. But Henry will be 27 years old when the 2021 season kicks off. By that point he’ll have run the ball well over 1,000 times in the NFL, after having run it over 600 times in college. And with such a bruising running style, 1,600 runs for Derrick Henry is probably equivalent to about 2,000 runs for someone else. So, knowing this, and knowing what happened with Todd Gurley in L.A. and David Johnson in Arizona, will the Titans really be willing to invest huge long-term money here?

Defensively, one of the biggest losses in free agency that no one is talking about is slot corner Logan Ryan. (Who, incredibly¸ remains unsigned.) Ryan was an integral part of Tennessee’s nickel and dime pressure packages, as well as many of the zone coverage disguises that define this defense. There’s probably not a rookie corner in this draft who has anything close to Ryan’s football IQ—at least not right away. But for this to remain a complex defense, it must have a stud in the slot. What might prevent the Titans from picking a corner is their need for additional D-line depth now that they’ve said goodbye to Jurrell Casey, Austin Johnson and Brent Urban.

Top-100 Targets (Tennessee owns picks 29, 61 and 93): Boise State’s Ezra Cleveland would be an ideal replacement for Conklin at the end of Round 1, with TCU’s Lucas Niang a potential consolation prize. If they go with a corner in Round 1, TCU’s Jeff Gladney could play the slot or potentially hold up on the boundary. There should be some corners with slot potential available on Day 2, including Ohio State’s Damon Arnette. If they’re lining up a 2021 replacement for Henry, 245-pound A.J. Dillon, who ran behind Mike Vrabel’s son Tyler at Boston College, brings similar size and style.